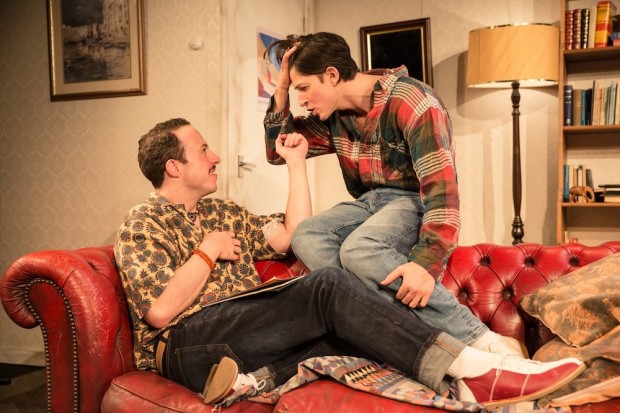 Long before Mark Ravenhill’s Shopping and Fucking, or Jonathan Harvey’s Beautiful Thing, Kevin Elyot was writing gay plays that were both provocative and full of emotion. His 1982 Bush Theatre debut, Coming Clean, first revived in 2007 at the King’s Head pub venue, now arrives in the West End in an excellent transfer. Today, this account of gay relationships some 15 years after the 1967 decriminalization of homosexuality, and before the arrival of HIV-AIDS, has both historical interest and offers a glimpse of Elyot at the very start of his career. It is also a frank, funny and occasionally ferocious entertainment.

In the bar, before the show starts, there is an announcement warning patrons that there will be full-frontal nudity. The response is an enthusiastic cheer — well, it is the press night after all. Set in a grubby first-floor flat in Kentish Town, the home of Greg — a grumpy thirtysomething New York academic who also writes novels —and who shares his place with his lover Tony, a would-be writer who once worked in computers, the play begins with this couple about to celebrate their fifth anniversary. One of their nearby neighbours, William, is a flamboyant queen who loves to cruise and party, and gossip with Tony.

Things hot up when Tony employs the younger Robert, an attractive out-of-work actor, as their cleaner (and, boy, does their flat need a good hoovering and dusting). Robert is also a great cook, and ends up preparing the meal for Tony and Greg’s anniversary. But although the couple say that they have a stable relationship, with perfect freedom to enjoy the occasional extra bit of sex on the side, the reality soon contradicts this rather complacent attitude. One night stands are okay, when the sex is recreational and “meaningless”, but what happens if you fall in love with the other man?

Elyot explores the sexuality of the London gay scene in the early 1980s with great charm and heart. His portrait of the American Greg and the English Tony is nuanced and emotionally realistic, with Tony feeling inferior to his lover and dependent on him for encouragement in his writing, while Greg is less cool than Tony and feels a bit left out of the cruising and disco adventures headed up by the outrageous William. The dialogues which involve William are witty and highly entertaining, as is Elyot’s picture of Robert, a naïve Shrewsbury youngster whose appreciation of classical music struggles to escape the experience of having been put down by his school teacher.

Although the talk ranges over subjects such as Greg’s negative experiences of teaching his bored students to the men’s shared love of Mozart, and the eroticism of music, the central theme is fidelity and unfaithfulness. If you have an open relationship, at what point, asks Elyot, does a sexual adventure become a betrayal? And if a committed couple tell each other everything, what is the emotional cost of lying, of deceit? In the play’s most excruciating scene, a sex act is interrupted by an unexpected return, and the emotional temperature rises as the characters struggle to talk, or avoid talking, about what has just occurred.

This kind of intimacy comes across very strongly in this studio space, as indeed it did both at the King’s Head and in the original Bush production. The casual onstage nudity is both sexy and conveys a touch of vulnerability, while the moments of physical tenderness carry as great a charge as the sex scenes. The arguments between Greg and Tony are realistic, and provide a counterpoint to William’s more florid declamations. And a more serious note is struck when one of the characters suffers a viciously homophobic attack, and the fact that this is still a fact of life for gay people in the UK gives the show an added relevance. And, of course, fidelity in love, and the attractions of monogamy, are a timeless subject.

Otherwise, some aspects of the play give a strong sense of the passing of time. It is a world where 90 pence for a pint of beer is an outrage, and Tufnell Park is less classy than Kentish Town. A world of land lines and state-aided bohemians, where the epitome of a mainstream job is working in an office with computers. This is also a gay play which has no coming out speech, and no inkling of HIV-AIDS. In fact, there’s a powerful sense of prelapsarian sexual innocence, which is nicely balanced by the tangled feelings of actual experience. The result is perceptive, well-grounded and realistic, as well as being very funny.

This is all well presented in Adam Spreadbury-Maher’s careful and perfectly pitched production, which has a set by Amanda Mascarenhas that radiates dust and dirt, and its period clutter, ghastly cheap furnishings and stained carpet are excellent at conveying the arty lifestyle of these cool young people. There is a convincing contrast between Lee Knight’s apparently cheerful Tony and Stanton Plummer-Cambridge’s serious-minded Greg, while Elliot Hadley’s brilliantly over-the-top William is a joy to watch. Last but not least, Tom Lambert’s fresh-faced Robert is similarly excellent. All the characters make a journey and learn some painful life lessons in a play that not only demonstrates its author’s early promise, but is still both relevant and fun to see today.