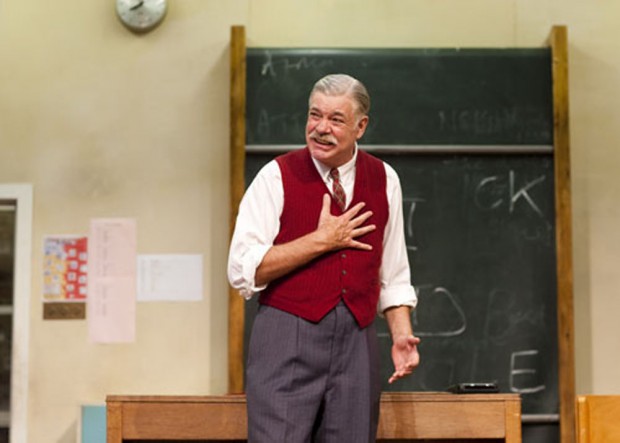 What are the politics of comedy? The great thing about Trevor Griffiths’s 1975 classic, Comedians, which opened tonight in a solid revival directed by Sean Holmes, is that this subject is debated with grace as well as humour. As six apprentice comedians attend a night class run by the veteran stand-up Eddie Waters, they find that their hunger for stardom clashes with his desire to use comedy to make a difference, to change society. Is comedy just a piece of harmless fun, or can it be used as a tool for social engineering?

Played by Matthew Kelly, Waters comes across as avuncular, hurt and washed up. When he explains how a particularly gross limerick is “a joke that hates women”, it is a masterclass demonstration of the way that comedy can bolster prejudice. But it’s his relationship with his best pupil, Gethin Price, that forms the emotional core of the drama. Like any good teacher, there is a paternal streak in his interaction with Price, just as there is something Oedipal about Price’s need to rebel.

In the showdown audition scene, when the other wannabes — including funny men such as Mark Benton and Reece Shearsmith — are trying their hardest to tickle the funnybone of Challoner, the visiting talent spotter on whose judgement their future depends, Price decides to subvert the event. His standup routine, a frighteningly intense piece of aggressive alternative comedy some five years before the genre was invented, is a dramatic highpoint, with the lithe David Dawson lending Price a fine mix of elphin lightness as well as cold fury.

As you’d expect, Mark Benton and Reece Shearsmith, as well as Billy Carter, Simon Kunz and Michael Dylan not only give a good account of their highly individual characters, but also fill the stage with a panorama of comic styles. Hoping to please Challoner, who is played with smooth insincerity by Keith Allen, their routines are peppered with racist, sexist and every other ist of jokes — a testament to a world of humour we have thankfully left behind.

Directing his first production as the new artistic director of this venue, Holmes brings out the desperate longing of the men’s lust for celebrity as well as the sharp conflict between Waters and Price. For while Shearsmith and Benton as the squabbling brothers seem to be a kind of hilarious Little and Large, Dawson’s gobsmacking routine reminds you that a performance can be both mesmerising and dangerous.

On one level, Comedians is an account of the tension in comedy between telling the truth and selling out; on another, it seems like a metaphor for leftwing political activism. But because the play so precisely captures its moment — the mid-1970s of skinheads, strikes and overt class antagonism — it now feels slightly dated, a feeling enhanced by Anthony Lamble’s naturalistic design. Drama, and society, has moved on a lot since then. And yet the play is about so much more than comedy, or politics. In its deep concern for truth, its compassion for human suffering, and its moments of blazing anger, it feels absolutely up to date.