Home » Reviews » Can We Talk about This?, National Theatre

Can We Talk about This?, National Theatre 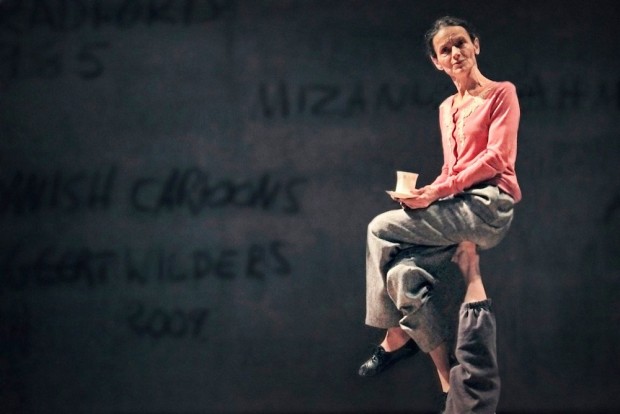 The great thing about political theatre is that it can take such a variety of forms, from big and bold state-of-the-nation dramas to scratch-night shorts. Recently, the market leader has been the ever-popular fact-based verbatim drama. One recent example shows how factual material can be edited into an evening’s entertainment, but does too much fact limit the scope of the political imagination?

Dance theatre company DV8, led by Lloyd Newson, has created a piece — Can We Talk about This? — whose origins lie in the discomfort that some liberals experience when confronted by the issue of multiculturalism. According to Newson, who writes about this in the program of the show, every time he has mentioned the subject of Islam, multiculturalism and tolerance at dinner parties, he has found that his lefty friends “either avoid the subject, doubt my motives for raising such topics or deny the evidence completely.”

Now what evidence is that? Well, in a nutshell, Newson argues that there are many Muslims who are much less tolerant of religious scepticism, homosexuality and less supportive of women’s rights than some non-Muslims. If you want to find some ugly ideas about gays you don’t have to look very far. In 2009, Gallup asked 500 British Muslims if they thought being gay was acceptable. How many said yes? Zero. You can question the method of sampling, but the conclusion is pretty stark: many Muslims are homophobes.

But, deep in the liberal heart, there is a strong tendency to feel that there are no absolute standards and that if Muslims genuinely believe in something then we should tolerate it. After all, isn’t it true that imposing our standards on peoples whose origins and heritage might lie in the former British colonies is just an example of present-day imperialism?

So Newson argues that, over the past decade, the New Labour policies of multiculturalism have encouraged people to choose the option of being politically correct, and to be nervous of criticising the excesses of Islamism. This might be true, but it is also an argument used by the fanatic right to attack racial and cultural toleration. Thankfully, you don’t have to accept such statements at face value to be impressed by the show. Relying on verbatim interviews with a large number of both the usual suspects — Martin Amis, Christopher Hitchens, Munira Mirza — as well as less often heard voices, DV8 recite a familiar catalogue of cases: the Salman Rushdie fatwa, the Danish cartoons, the Dutch film-maker Theo van Gogh.

Some 10 performers simultaneously illustrate these quotations with a variety of dance moves, from the jittery to the eloquent. I enjoyed a lot of the dancing very much. At one point, to illustrate the writing of the Dutch film Submission, one dancer draws a line over her body. At another point, another dancer plays MP Anne Cryer talking about her campaign against honour killings, while gently sipping tea and being wafted across the stage.

Other scenes have jerky interactions between the speakers, as if the issues were physically uncomfortable. Clearly, many of the show’s examples of militant Islamism are examples of blatant bigotry. But not many in the audience would disagree that imposing your beliefs through violence is wrong, and sadly the show lacks a compelling storyline. There is no drama, just a piling up of rather familiar examples. Too many words, not enough dance. Too much verbatim, not enough imagination. Yes, we can, and have, talked about all this. Who hasn’t?