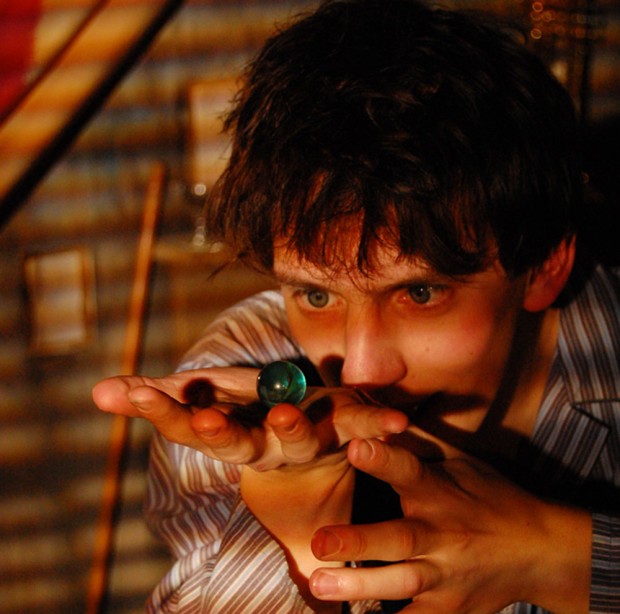 We remember JM Barrie as the creator of Peter Pan, that quintessentially English fairy story which features Neverland, the Boy Who Wouldn’t Grow Up, and where “to die would be an awfully big adventure”. Generations have embraced this mythical tale as an expression of the spirit of upper-class Deep England. Here the Victorians are us. But James Matthew Barrie himself was the child of a Scottish Calvinist working-class family, and is the subject of Alexander Wright’s play — a hit in Edinburgh last year — which aspires to be a kind of anti-myth.

The Boy James is staged in an evocative crypt-like vault, which is decked out like a bohemian boudoir, all wall hangings, ceiling drapes, Turkish carpets, deep sofas and dusty cushions. The show is interactive so it’s no surprise that when the pyjama-clad Boy bounces in, he starts the evening by persuading members of the audience to play “It”, then “I Spy”, and finally hides in the wardrobe, making funny farting noises and silly animal squawks and bellows. Then not much happens.

Then James arrives. The Boy now starts telling us of all the great adventures that these two have had. There’s a lot of talk about daydreaming and playdreaming, and explorations and divagations. The atmosphere is that of vivid memories of dramatic events in Neverland recollected in tranquility, and a sense of loss hovers over the proceedings, a bit like a Tinkerbell that has lost her spark. James is clearly bidding his younger self goodbye. Then not much happens.

The Girl arrives. She looks bored. She’s unimpressed by the Boy’s stories of his and James’s imaginative adventures. In fact, she doesn’t take to James at all. Then, in a sudden plot reversal that silences the audience, she takes control. Yes, she likes games too, but her idea of a game is much more adult than that of the Boy’s. Suddenly, there’s a real gleam of danger as the Girl becomes Eve the temptress, and sex, the worm in the bud of Victorian culture, threatens not only the Boy, but childhood itself. Then not much happens — again.

York-based Belt Up Theatre’s 60-minute production, directed by Dominic J Allen, has its heart in the right place, but Wright’s play is painfully fay and verbose for most of its admittedly short running time, and by the end of the show I’d had my fill of “dreams pinned on butterflies”, for the language of this lost Victorian kiddieworld rapidly becomes cloying. The hectic images feel old fashioned and contrived, the writing self-indulgent and over-wrought, the audience participation invasive and unexciting.

The one or two genuinely tense moments as James leaves the world of his Scottish childhood behind, aided by his budding sexuality in the shape of the autonomous and grown-up girl, are forgotten in the memory of a rather inert staging. To be fair, although the actors spend too much time just crouching on the ground, they are quite memorable: Jethro Compton’s breathless and mannered Boy contrasts well with James Wilkes’s chilly James and Lucy Farrett’s perky Girl. But the artificial language of the past never really comes alive, and only the passages which were read by members of the audience had a genuine feel. An awfully big adventure? No, an awfully big disappointment.