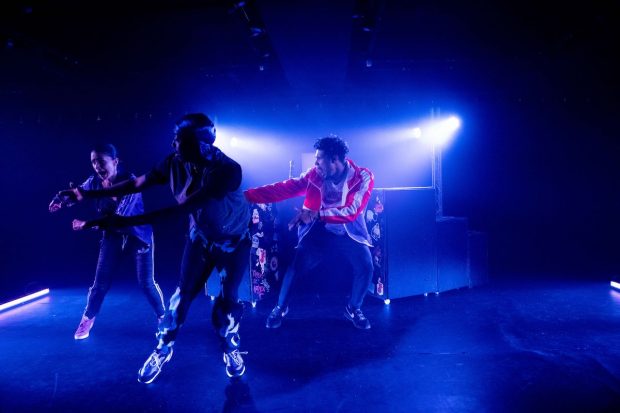 Is gig theatre the latest sugar rush? Okay, it ups the brain’s serotonin levels and charges around your body like a crazy electric current, but amid the joyous nerve reactions does the music speak louder than the words? These questions won’t bother many in the young audiences that are targeted by the Soho Theatre as it stages Bangers, a “mixtape play” written by Danusia Samal and directed by Chris Sonnex, and featuring original music by Duramaney Kamara, Samal and Sonnex, but they are worth asking. After all, this is meant to be a new writing theatre.

Bangers comes to this venue’s sweaty studio space after a four-week tour to community venues across London. But the first surprise is that, despite the soaring temperatures outside, this is not a boiling room: the air-con is up full-blast so the sweat on your neck freezes rapidly into icicles. Still, there is not much time to worry about cold draughts, because the show starts and immediately you’re in the groove. Set during the course of one night, the short 70-minute piece follows two young Londoners as they cross the capital and try to deal with the past problems that weigh them down.

So there’s Clef, a teen who has just finished his last day of school and plans to join his best mate Tone to perform their double-act of rap music at a Ministry of Sound club night; and then, meanwhile, there’s 30-something Aria, who has just broken up with her boyfriend and is also heading to the same venue as she joins her best friend, Bex, who is leading a posse for a hen-night. These two interconnected stories are narrated through 10 music tracks, curated by the DJ, who also voices links between episodes as well as comments, while the two actors not only play their main characters, but also all the incidental parts (parents etc).

I have to say that there’s a joyous post-pandemic vibe about this gig, full of laughs and quick satirical nips, and that, by contrast, what the stories have in common is the fact that most of the characters make sexual mistakes, or bad moves. So Clef, who’s trying to lose his virginity, forgets that sex involves another person; Aria makes love to her boyfriend, but can’t help holding back (she has had a bad experience in her teen years); Clef is also sexually attracted to Tone, who isn’t interested in that; an older schoolteacher makes an inappropriate clinch. All of these experiences, which are sympathetically and perceptively invoked, involve the feeling of rejection, and this has scarred all of the characters. Even the incidental personages are suffering from loneliness and insecurity.

Although written by Samal, the play is an ensemble piece in which DJ Kamara joins the two actors — Samal as Aria and Darragh Hand as Clef — in dance sequences and in pushing the story forward. Samal as well as Sonnex collaborated on the music, inspired by R&B, garage and grime from the 2000s to the present, and the singing is beautifully performed. Together, on Zoe Hurwitz’s makeshift set, the cast explore some big themes about youthful sexuality, family life and ambition, but the speed of the evening — and the banging tunes — effectively means that we never get to explore any of the emotional pain in depth, or reach anything but the simple conclusion that life must go on.

Sonnex is the new artistic director of Cardboard Citizens, a theatre company dedicated to combating social injustice and working with the homeless and other underprivileged people, so this gig has a fine buzz of the contemporary and a real sympathy for sexual confusion and other experiences such as the loss of a parent. At the same time, the club-night vibes — and the cheerful jokes — drown out (sometimes literally) a lot of the more excruciating content. There are at least four characters in this short play that deserve a full-length drama: I hope that Samal will one day write at least one of them.