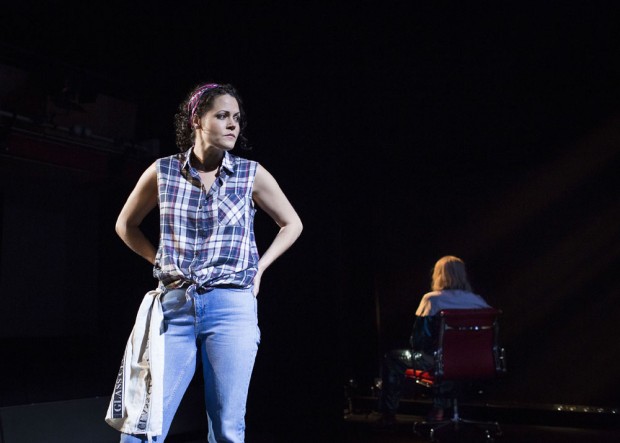 Jimmy Savile is now one of the most emotionally charged names in British culture. So the announcement of Jonathan Maitland’s new play, An Audience with Jimmy Savile, was greeted with predictable media outrage: how dare a playwright tackle this subject? What will the victims feel about a theatre using their experiences for entertainment? Isn’t this just sexploitation? Needless to say, this is serious play about a serious subject — and it has been handled with immense, even exaggerated, sensitivity (the theatre has refused to issue photographs of Alistair McGowan in the title role).

Maitland works as a journalist and his 90-miute play is both a documentary — with verbatim extracts from Savile’s words, including police interviews — and a reconstruction of the life of an imaginary abuse victim (here called Lucy, who symbolises all of his victims). From the off, as Savile bounds onto the stage, this is a rather skin-crawling evening. Knowing what we do about this deeply unpleasant criminal, it’s simply hard to watch him playing the part he maintained for some five decades: the cheeky clown with a heart of gold.

It’s 1991, and Savile is at the height of his power. As his career is reviewed by a This Is Your Life-style programme, he can be excused a complacent smirk: he is friends with Prince Charles, he has been knighted by the Queen and by the Pope, and everyone thinks he’s great. His charitable — and not-so-charitable — activities range across the country’s hospitals, from Broadmoor to Stoke Mandeville. Everywhere he is loved; everywhere he is trusted. The BBC thinks he’s great. He can do what he wants. And he does.

Interwoven with these scenes is the story of Lucy, who was raped by Savile in hospital when she was 12 years old (her description of this episode is excruciating). As her own daughter turns 12, she delivers her evidence. What emerges is the horrific truth that no one believed the testimony of Savile’s victims. So Lucy’s father, nurse, doctor, media, police all fail to act on her behalf. She decides to seek justice in a more direct way. But she is up against a very strong man: the BBC needs Savile for ratings, hospital administrators need him to raise money, police officers won’t touch a man who boasts of top Establishment connections and journalists are easily intimidated.

Maitland paints an utterly convincing portrait of an abuser who instinctively knows how to stay in control: during the television show Savile is surprised to see that one of the guests is his chauffeur and bodyguard Ray, a man who knows all of his secrets. But he regains control by subtly telling Ray — in a subtext that is only chillingly evident to us — to be extremely careful what he says: “Not a word now.” More crudely, every time Savile is questioned by journalists or police he violently threatens them with the libel laws and boasts of his connections with the rich and powerful. You can see why Lucy isn’t going to get justice while Savile is still alive.

This play tells the story of the abuser who hid in full view with integrity and precision, although I would have liked to know more about what it was that turned this Leeds-born boy, one of seven kids who called his mother the Duchess, into the predatory paedophile whose crimes were so audacious and enormous that they seem to define a whole era. Rising on the wave of pop culture, Savile groomed his personal legend, harnessing the “power of odd”, to become a massive media celebrity. He also claimed that although he was a sinner, he was also a penitent who did good charitable work — and that the good cancelled out the bad. Surely a perversion of Roman Catholic doctrine?

Director Brendan O’Hea’s fluid production can boast a genuinely creepy central performance by Alistair McGowan as Savile. With his trademark bleached hair, fat cigar, turquoise tracksuit and Adidas trainers, he looks, talks and moves like a breath-taking simulacra of the man himself. Disturbingly, you can see why this self-appointed court jester — so clearly eccentric and so fluently crazy — appealed to us Brits. And the play feels like a step-by-step descent into an ever-deepening darkness. It is truly one of the most powerfully unsettling theatre experiences on the London stage.

How Savile managed to get away with his abusing for so long, acting as he did in plain sight, is likewise an ugly reality that is hard to shake off: what kind of a society do we live in, and why are our institutions so cravenly in hock to celebrity? Helping to convey the sheer horror of his abuse, Leah Whitaker turns in a brave performance as Lucy, while Graham Seed is the BBC compere, and Robert Perkins and Charlotte Page play some eight other roles. Although Maitland’s writing lapses a bit into didacticism during the final confrontation scene, this remains a strong and savage play about a very nasty man.