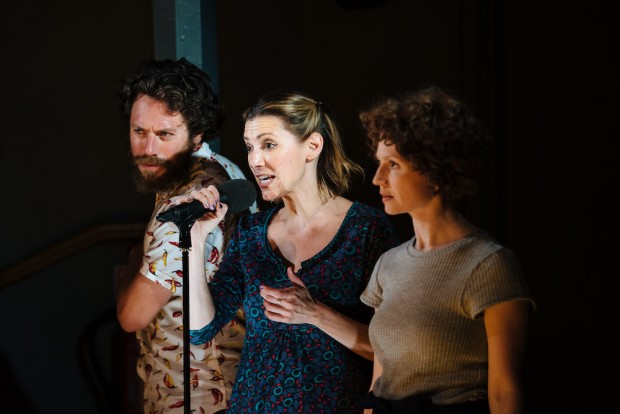 The past can often hang like a nightmare on the present. And, in the case of Jewish identity, this haunting can have terrible psychological consequences, a situation which has been considerably exacerbated by the recent rise in anti-Semitism. So the main theme of Israeli playwright Maya Arad Yasur’s new play, Jewish identity today, is certainly relevant. But this version’s publicity claim that the 80-minute drama, which was first produced at the Haifa Theater in 2018, is an “audacious thriller” and “strikingly original” gives a misleading impression and will probably lead to disappointed audiences.

That said, the central plot idea is intriguing. A nameless Israeli violinist, living in a lovely canal-side flat in Amsterdam, is nine months pregnant. As she waits to give birth, visiting — among other places — her local supermarket, an ante-natal clinic and talking to her agent, her neighbour pops a utilities bill under her door. She doesn’t really understand Dutch very well so she can’t make out exactly what it says. When a native speaker, at a night club, helps her out she is shocked to discover that this is a gas bill, for 1,700 Euros, and it’s dated 1944. Of course, the connotations of the word gas and the date resonate with memories of the Holocaust.

But this gas bill also poses a puzzle: who was it originally addressed to, and why didn’t they pay it? The final sum includes accumulated penalties for late payments, and apparently these bills have been arriving at regular intervals over the years. As the story of the bill, such an ordinary everyday object, develops, Yasur gives a deep sense of how oppressive the weight of Jewish identity can be, even in a tolerant country such as the Netherlands (where actually, she reminds us, 75 per cent of the Jewish population was murdered during the Final Solution). Tolerant, or not, the shadows of the past can colour the experience of the present, and there’s a couple of neat twists as this tale takes shape.

For me, the problem with the play is not the content, but the form. Yasur has adopted the idea of an open text, where the dialogue is divided into sections, but not ascribed to any characters. With no character names, and a freewheeling storytelling form, the play is a piece of narration which challenges us from the beginning. It forces us to ask: who is telling this story of an Israeli violinist? And why are they creating the narrative’s episodes together and with such imaginative zeal? Are they screen writers at a conference, or students on a writing course, or theatre-makers creating a show?

Any answer is possible. Matthew Xia’s production, his first as the new artistic director of the Actors Touring Company, choses to stage the play by using four actors, so the story of how a house might contain within its present structure the memory of the past (Anne Frank’s Amsterdam house is mentioned in passing) is told in the shape of a meta-theatrical show, with the actors moving freely across the stage, and making use of a bell and microphone whenever they need to read out one of the text’s many explanatory footnotes. Eran Edry’s translation is clear and full of character, but it’s not long before the piece starts to annoy.

The thing that will immediately strike anyone who has followed new writing is that this play’s form is very familiar. Far from being “strikingly original”, Amsterdam is heavily indebted to Martin Crimp’s Fewer Emergencies style, down to the repeated use of “That’s right” as a verbal marker, and the open text likewise carries echoes of Sarah Kane and Caryl Churchill. This Crimpian quality is less surreal and less brief than the original, and seem tricksy rather than profound. In effect, the result is less of a “audacious thriller” than of a fantasy exploration of history and personal identity. There’s plenty of good material: it’s the form that seems to be out of place.

When the playwright’s pregnant violinist talks about her composition of a concerto called The Starling Paradox, Yasur uses the metaphor of the flight of starlings, when the birds swoop and turn in perfect synchronicity, she makes a strong point about how minorities need to protect themselves. There are also good patches of writing about how we imagine the second world war with a mixture of retrospective blame and heroic fantasy. Amid the grim humour of some of the episodes, where anti-Semitism can be experienced even in moments of gynecological intimacy, there are textual games with language and perceptive points about European culture.

Most of the work, however, is done by the actors. Daniel Abelson, Fiston Barek, Michal Horowicz and Hara Yannas create a dynamic and well-grounded stage presence, despite some moments of rather too frantic rushing around. Each of the actors gives their voice a discernible character, although Xia could have worked harder on making this clearer. The sparse props, in Naomi Quick-Cohen’s design, which include a 1940s typewriter and desk, could also have been used in a more coherent way. Whenever the word “genocide” is uttered, a long silence creates dramatic tension, although a scene change in the middle of the evening felt a bit unnecessary, despite the chilling Nazi marching song. In the end, you are left with a strong sense of how any house might be impregnated with historical hauntings.