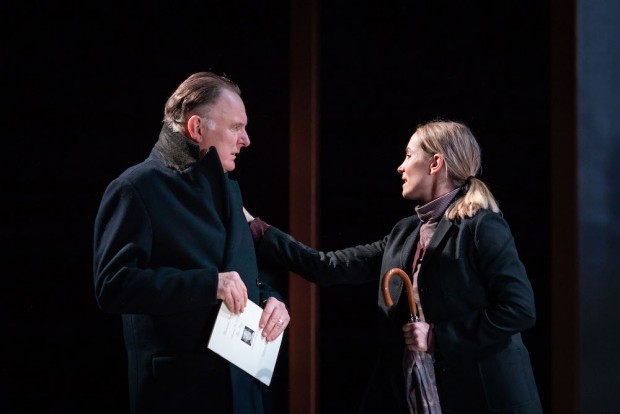 Okay, so this is the play that will be remembered for the character names that have unusual spellings. As in Alys not Alice, Kyte not Kite, etc. Anyway, Lucinda Coxon’s adaptation of journalist Harriet Lane’s 2012 bestseller for the Bridge Theatre starts off with Frances (Downton Abbey’s Joanne Froggatt) coming across a fatal car crash in which Alys, a woman she doesn’t know, is killed. As all those who have read the book will recall, Frances finds that her life changes when she is contacted by Alys’s family, especially her husband Laurence Kyte (Hustle’s Robert Glenister), who turns to her for what is commonly called closure. After all, she’s the one who heard Alys’s last words.

Like so much in our culture, this is a story about class. Frances is a nobody, a timid thirty-something arts desk sub-editor and general dogsbody, who is employed by The Questioner newspaper (any resemblance to The Observer is purely coincidental); by contrast, Laurence is a real somebody, an award-winning novelist and a household name. It’s the difference between Poundland and Planet Organic. As Frances is drawn into the Kytes’ celebrity world she sees the opportunity to better herself. Like a figure in some Hitchcock film, she starts to imitate Alys’s identity, dressing like her, cooking her recipes and changing her hair and make-up. Inevitably, she will end up in Laurence’s arms. It’s a question not of if, but of when.

So this is a kind of belated coming of age story as Frances, an invisible ugly duckling turns into a highly visible swan. To make this metamorphosis she manipulates her way into the Kyte family, using the young daughter Polly as her key, and very soon this pays off. Simply knowing the famous Kytes gives her kudos: at one point she kisses Laurence on the cheek in public — then checks that her boss has seen her. Her opportunism works wonders: at the office she is promoted; she gets to have lunch with the rich and privileged. At the same time, in terms of identity, something bizarre is happening: Frances feels more herself when she pretends to be Alys than when she is simply Frances.

As well as this mildly perverse take on personal identity, which remains regrettably undeveloped, the play — whose story Frances narrates straight to the audience throughout — is a superficial study of truth and lies. At the heart of the plot is a secret that eventually comes out, although I had no sense of dramatic tension because it is not signposted clearly enough. Instead, the chief pleasure of this evening lies in the continuous satirical jibes at journalism and at family life. Okay, these bits are quite funny, but they hardly compensate for the slack and rather pedestrian storytelling, not all of which is convincing.

Perhaps the most disheartening thing about the story is that the rich and privileged, especially young Polly, are presented as so silly that Frances’s ambition to be one of them must be either foolish, or pathological. Sadly, it’s the former. Her happy moments with Polly the airhead show the emptiness of contemporary celebrity, but you do wonder why we should care. I mean Frances succeeds by being manipulative, opportunistic and using her intelligence to deceive other people. It’s really hard to admire this will to power: there’s a really ugly side to Frances. Which makes it hard to root for her.

So much of the fun of the piece, which reminds me strongly of those vapid West End comedies of the 1950s, lies with incidentals: a cooking metaphor that sums up Frances’s manipulative sense of timing; the idea that Frances is always acting, always on show, which is what gives Froggatt’s performance a certain frisson. But the whole thing is woefully thin: not only is Frances unsympathetic, but what the piece has to say about creativity is banal, and the absence of tension, of subtlety and of conflict means that the story frequently wobbles. And if Frances is a monster of envy she never really lets us see into her dark heart.

Still, Nicholas Hytner’s efficient production has a typically effective design by Bob Crowley, whose set fluidly morphs between flats, houses and offices, and Froggatt’s acting has the appeal of letting the audience see a kind of elaborate in-joke: she clearly signals when she is being manipulative, but the other characters can’t tell. By contrast, Glenister has neither the charisma nor the darkness to be thoroughly convincing, and his exchanges with Froggatt completely lack the spark of attraction. Damp rather than dynamic. Of the rest of a large cast, I found Leah Gayer’s Polly to be richly annoying and Sylvestra Le Touzel enjoyable to watch as the arts editor. But in the end this story feels like a weak version of a potentially good idea.