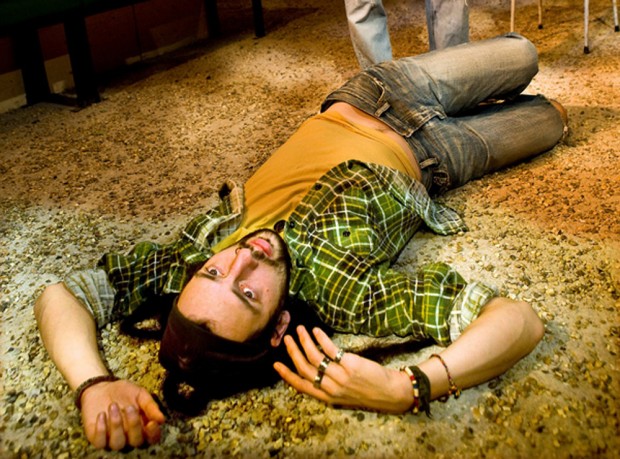 You can see the appeal of being a slacker. You don’t work, you just sit around like a cool dude and shoot the breeze; you smoke, you drink, you take drugs, er, lots of drugs. You can call people “man”. Hell, you don’t even need to wear your sneakers all day — just kick them off and go barefoot. Only one problem: emotional commitment is a big no, no. Want to know more?: go see American playwright Annie Baker’s new play, which opened at the Bush Theatre tonight — it takes a long calm look at slackerdom’s highs and lows.

Thirtysomethings KJ and Jasper are committed slackers. They spend hours just chatting in a yard at the back of a small coffee shop in Vermont, nicely designed by Lucy Osborne, talking about music and lots of other stuff. Jasper is a fan of cult writer Charles Bukowski, and has literary aspirations — his writing is a copycat beat narrative — while KJ is more moved by music: he writes songs. Indeed the two of them were once in a band (sort of), called The Aliens — and the name sums up their view of their place in the American Dream. Soon, these two losers are joined by the innocent Evan, a 17-year-old would-be student whose summer job is working at the café. Naturally enough, he is drawn towards this disreputable pair, with their magic-mushroom tea, their cigarettes and their air of battered experience and cool humour. As the three of them gather around the plastic grates one July, there are plenty of opportunities for them to sneer at the state of the nation, and elaborate on their own self-mythologies. All to the sound of soulful, acoustic, finger-plucking melodies.

Slowly, it emerges that things are not quite as funny as they at first seem. Jasper has woman trouble, and he is clearly not the literary genius he would so like to be. Worse, KJ has mental problems, and he really shouldn’t mix his meds with drink and drugs. Not to be outdone, Evan has his very own uncertainties, chiefly with his mum and his nascent sense of estrangement from mainstream America. He is all lonesome aches.

Annie Baker’s gentle but humorous play lovingly creates two cultish heroes, examples of boys who never grew up. Their songs have crazily compelling lyrics, quirky in their knowingness and wryly funny in their pretension. Here, as in the rest of the play, Baker treads a very fine line between parody and reportage from the frontline of youth culture. This balancing act between laughing at the characters and sympathising with them, between reproducing examples of their creativity, and exposing its folly, is Baker’s forte.

Originally staged by New York’s Rattlestick Playwrights Theater in April, The Aliens was joint winner of this year’s Obie Award for Best Play. This version is directed with immense sympathy and truth by Peter Gill, one of the most influential theatre-makers of the past 40 years. And his star cast is spot on: Ralf Little’s KJ is so charismatic you can happily watch him eat a brownie, and think that something interesting is happening in his mind. And as he proved so well in last year’s Jerusalem, Mackenzie Crook is a really versatile talent; his Jasper is a convincing mix of repressed glory and delusion — tightly wound, he’s ready to snap. As Evan, Olly Alexander makes his stage debut with the attractive awkwardness that is his character’s defining feature.

This is a surprisingly tricky play, which sometimes treads very near the edge of making a statement far larger than its characters are able to think of, but then steps back and contents itself with, well, being itself. Just like its characters. So while we sometimes expect an explosion of feeling, and have to endure an unnecessary interval, what we are left with is a gentle ache — and a sense of compassion for life’s losers, its incapables and its hurting souls.