Home » Blog » About Oh, the Humanity

About Oh, the Humanity 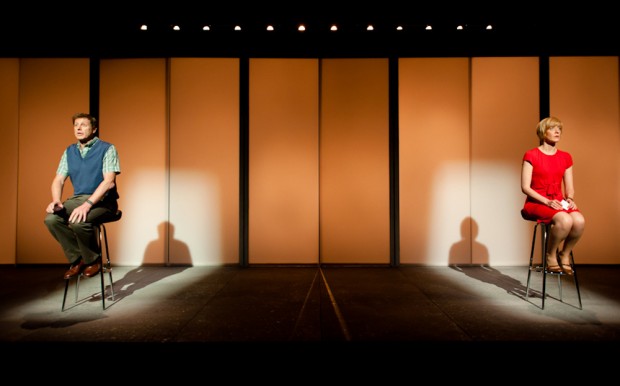 New York playwright Will Eno’s Oh, the Humanity is cool. I saw this show on Monday at the Soho Theatre and it consists of five rather short scenes, all of which are riddled with excruciating embarrassment. A sports coach holds a press conference and admits to his failures; a man and a woman make videos about themselves for a dating agency; an airline spokeswoman delivers some bad news; two photographers try and relax their target audience; a couple assess their lives. In every case, the characters are tentative, uncertain of themselves and their place in the world. Like many Americans in the post 9/11 era, they know that all is not well, and each of them has stopped pretending. More or less. They certainly won’t be wishing you “a nice day”. Well, not without biting their tongues as they do it. Eno writes his dialogues and monologues in a calm and charming way, and all the hotter emotions of outright panic and anger are kept below the surface. As directed by Erica Whyman of Northern Stage, where this show was seen last year, this is an evening of precision acting from Tony Bell, John Kirk and, especially, Lucy Ellinson. The stories come across as funny, touching and thought-provoking. Of course, the evening suffers from being rather brief, and as you get to know each character you want to see them in more situations than Eno allows. Yes, the short play format is inherently a bit frustrating.