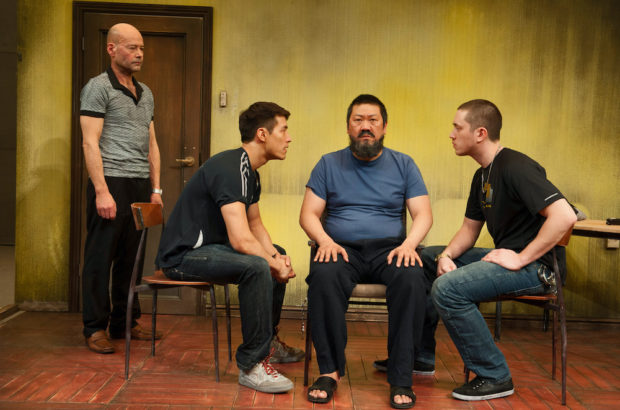 London’s Hampstead Theatre has recently been very successful in bringing some of its best shows to a wider public — despite coronavirus. This week, it’s the turn of Howard Brenton’s #aiww: The Arrest of Ai Weiwei, which was first staged at this venue in April 2013, and in the intervening years has gained in resonance and relevance. Because of COVID-19, the ideology and mentality of the Chinese government has become once again an object of keen scrutiny. So what exactly happened to this fêted contemporary conceptual artist when he fell foul of his country’s regime?

On 3 April 2011, nine years ago, Ai Weiwei was boarding a flight to Hong Kong when he was arrested at Beijing airport. When he asked what was going on, he was told that his travel “could damage state security”. Following his arrest, he disappeared for 81 days. When he was finally released, the government claimed that his imprisonment related to tax evasion. Brenton’s play is based on the artist’s account of his experiences in Barnaby Martin’s 2013 book Hanging Man: The Arrest of Ai Weiwei. Normally, we call such extreme events Kafkaesque, but even the Czech writer would struggle to imagine such a surreal, and frightening, story.

Here rationality is survival’s key. And it’s been thrown away. The artist is incarcerated in two different prisons, where the guards are both brutal in their manhandling of him, and even more brutal in their attitudes to what they see as a privileged middle-class artist. When they ask him who he is, he replies, “Artist”. Then comes the correction: “Art worker you mean.” It is, after all, a workers’ state. Being innocent is not enough. The story shows how absurdist the interrogations are: the questioners have only the vaguest idea of who Ai Weiwei is, and they certainly don’t know anything about his “crimes”. At first, he is questioned by Bejing’s murder police. Confess and tell us who you killed, they insist. Yes, it’s that weird.

Gradually, the interrogators manage to acquire some knowledge of conceptual art, and even some belated sympathy towards this mysterious artist, a feeling shared by his soldier jailers. When Ai Weiwei asks one of them why they are sad, he says it’s because the Americans have murdered his hero. Who’s that? Oh, Osama bin Laden. Crazy stuff. So while the authorities start off by denouncing his art as a con, a swindle, they end up by realising that the artist is less dangerous to them outside prison than inside. This turnabout is led by the Director, here called A, who intelligently analyses the situation in one of the play’s best scenes.

From another point of view, the Chinese regime comes across as idiotically paranoid. It builds lie upon lie because it is afraid. Having witnessed the Fall of the Berlin Wall and the Arab Spring, many top bureaucrats have the nightmare feeling that their own regime is so fragile that even one artist could topple it. This kind of anxiety then results in over-reactions and violent repression. Only the Director is cleverer; he realises, for example, that physical torture is useless: “The aim is a broken soul not a broken body.” Brenton carefully balances the more intelligent faces of the regime with the more brutish reactionaries, showing how stupidity is basically inefficient. It doesn’t take much to apply this insight to the current pandemic.

In the numerous interrogations, the question of art inevitably arises. The interrogators ask: why can’t you paint beautiful leaves and pagodas? After all, the people just want good pictures, not the rubbish that characterises conceptual art. In reply Ai Weiwei proclaims the death of classical art, makes jokes about perspective, and argues passionately for an art that helps us cope with the complexity of life today, an art that asks questions and doesn’t offer just platitudes. Inevitably, the same kind of reasoning applies to Brenton’s docu-drama: why, you might ask, is it so naturalistic, theatre’s equivalent of figurative art?

But if most of the play tells its story in a simple and straightforward way, Brenton does occasionally drop us into Ai Weiwei’s mind, showing how his subjectivity is under strain. So amid the surrealism — the soldiers who join the army because of the uniform, the open trials that are really closed, the humiliating toilet rituals, the chat about making noodles — there are flashes of imaginative vision. At the end, the final appeal for free expression and truth could have been written yesterday — it has a rare power. Beautiful. Likewise, the image of an artist destroying classical beauty to get at truth is frankly majestic.

Perhaps the most appealing thing about this drama is Brenton’s steady fair-mindedness. It would be too easy, he knows, to paint the regime as just a bunch of buffoons. So a variety of attitudes are developed during the play, from class antagonism against educated arty types to a reasoned understanding of how best to neutralize the threat of dissidence. The playwright is also scrupulous in showing that Ai Weiwei is no angel: in one of the strongest passages, the interrogator uses the evidence of the artist’s blog to calmly demonstrate that he can be a potty-mouthed critic of the Communist Party — not a mere innocent. Point taken.

Directed with clarity by James Macdonald (who also directed the recently streamed Hampstead Theatre at Home production of Mike Bartlett’s Wild) and designed by Ashley Martin Davis, this staging plays with the idea of conceptual art by having a large box on stage, which opens out to become the set, after being first admired by a crowd of Instagram-snapping hipsters at the start of each act. In the scene changes, these supernumeraries arrive one stage again, getting autographs, laughing together and playing at being part of an art event. But while most of the filming has an excellent elegance, these bits cry out for trimming; the more filmed productions I see the more I’m convinced that an accurate record of a production is less interesting than a well-edited and properly curated film.

In this recording, made on 19 April 2013, it is a joy to see Benedict Wong as Ai Weiwei, the camera capturing his perfectly nuanced performance: bemused, sarcastic, defiant, wry, angry, patient, despairing and finally eloquent. When, at the climax, he cracks in a paroxysm of febrile tears, it’s a great moment. He is well supported by David KS Tse as the smooth-tongued A, Orion Lee as an eventually sympathetic interrogator (dressed in a Ryan Giggs football shirt), and David Lee-Jones, Andrew Koji, Christopher Goh and Richard Rees as various parts of the state repressive apparatus. #aiww: The Arrest of Ai Weiwei is a brilliant piece of political theatre.