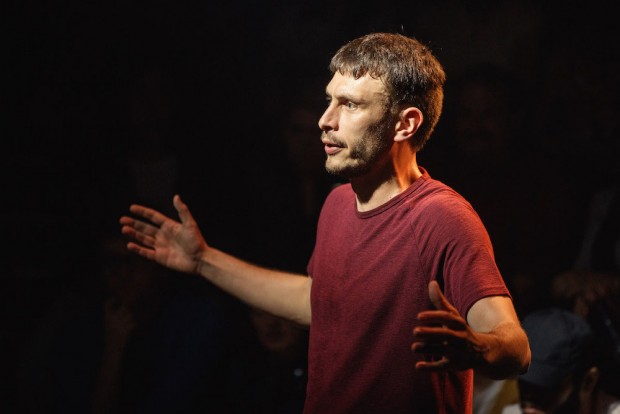 True stories, even in a fictional form, have the power to grip you by the throat, furiously shake your body and then give you a parting kick in the arse. This is certainly true of stand-up comedian Richard Gadd’s Baby Reindeer, a blistering monologue which was first seen in Edinburgh this summer, and is now at the Bush Theatre in West London. Apparently based on his true experience with a female stalker, this is an obsessive story about about obsession, and one which asks pertinent questions about what it means to be a victim, complicit or not, and how difficult it is to recover from trauma.

It’s six years or so ago, and young Gadd is working in a bar. One of the regulars is Martha, a fortysomething woman who claims to be a top legal eagle (with clients including David Cameron!), but never has any money on her. And spends far too long in the place without doing anything. Gadd feels sorry for her and thinks it’s okay to flirt. After making a very ill-judged and inappropriately sexual joke, he finds that her interest in him becomes obsessive. She starts phoning and emailing him constantly, incontinently, and then starts turning up at his gigs. Her name for him is “Baby Reindeer”. But because she never threatens him with violence, the police say that they are powerless to stop her.

Sharing this Kafkaesque nightmare is Gadd’s love interest, Teri, “a Mediterranean, gender non-conformist, sexually fluid, politically active, trans woman”. As Gadd struggles with his own feelings of sexual confusion, Teri is there to counsel him about Martha, who becomes more and more obsessive. More and more intrusive. What comes across strongly is how obsession can become contagious: Gadd finds that he cannot stop thinking about Martha, and that thoughts of her have taken over all of his waking hours. The victim becomes as contaminated by monomania as the stalker. Complicity is a mild word for it. And no legal redress is possible.

As you’d expect, Gadd writes this story with enormous passion and frightening intensity. He reproduces Martha’s emails and voicemail messages, illustrating how “she would leap from sentence to sentence, each thought bounding onto the next, never pausing, never hesitating” — which is also a great description of this one-man play’s text, whose energy pulses unremittingly for the 75 minutes of the show’s running time. There are glorious passages of grim hilarity, in-yer-face details of Martha’s personal life and agonising moments of Gadd’s painfully, and very gradually, acquired self-knowledge. Like a psychological detective story, we finally find out exactly why Martha calls him “Baby Reindeer”. And it’s so sad.

On the way, Gadd recounts how Teri gave him a copy of Stefan Zweig’s Beware of Pity, a novel which shows how some people use kindness in a way that damages those around them. And themselves. Martha is soon exposed as an extremely needy and very disturbed individual, as much a victim of pathological circumstances as Gadd, whose own story of being groomed by a man while a student is disturbingly recounted. Amid all of this dark material, there are lashings of humour, and the show features visually stimulating projections of text, interviews with Gadd’s friends and family, and blasts of music along with piercing rays of light. It’s not all bleak.

In Jon Brittain’s lively production, Gadd leaps around the stage, his mental agitation mirrored by his physical movements. He relives the story with a mesmerising stage presence. At times he is charming, or obviously fragile, and by the end on the verge of collapse: looking like a kind of Rodin sculpture of agonised masculinity. His performance is helped by designer Cecilia Carey, who creates an empty playing space with four boxes at its corners and a revolving circle in the centre, a round space that draws in Gadd over and over again, as if the story’s obsessive behaviour is like a black maelstrom sucking the characters into its heart. Standing in for Martha is a cheap wooden bar stool. Apart from that, every aspect of the show is dark: words, motivations, story and lighting. At times it’s hard to follow the words because the rush of sound and lights is so overwhelming, but in general the production is exciting as well as compelling.

With its ethical questions (how much of one’s life should one use in a public performance?) and issues about personal behaviour (how far should we use other people to overcome our own confusions?), this is a show with bite. And, just as Gadd’s mind is colonized by his stalker in a bizarrely personal take on the Stockholm Syndrome, so it’s hard to shake off the passionate vivacity of the play’s content. On my way out of the theatre, I pass a young alcoholic taking shelter from the rain in the building’s doorway. He apologises for being in the way, and I am about to say something nice to him. Something friendly. But the words freeze on my lips. What if he misunderstands? What is he starts to stalk me? Oh, the appalling power of theatre.