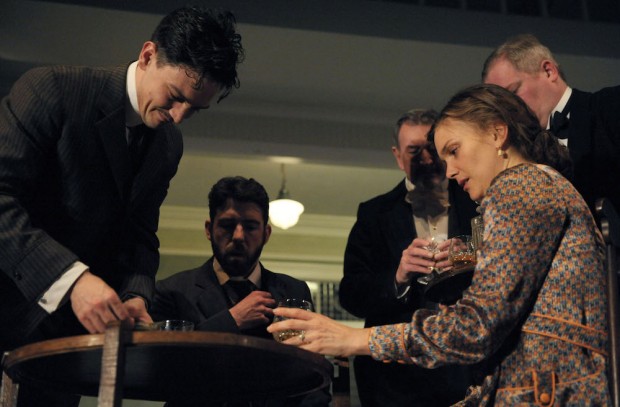 Katie Mitchell is the most exciting director working in British theatre today. During her years at the National Theatre, she has been responsible for some of the most innovative instances of staging that I have ever seen. Her multimedia versions of Virginia Woolf’s The Waves (in her version Waves) and Fyodor’s Dostoyevsky’s The Idiot (ditto Some Trace of Her) created unforgettable theatrical experiences; her revivals of the work of Anton Chekhov and Martin Crimp are a gold standard against which other stagings will be judged.

Now Mitchell returns to Thomas Heywood’s 1607 play, A Woman Killed with Kindness, which she first directed for the RSC in 1991 in a production that was heavy with anthropological intensity. The plot concerns two women: Anne, who marries John, and Susan, who resists the advances of Francis (the brother of Anne). Anne and John’s relationship is undermined when Wendoll, a family friend, seduces her, and Susan comes under pressure when her brother Charles becomes seriously indebted to Francis.

Mitchell’s masterstroke is to put these two interlocking stories literally next to each other by splitting the stage into two areas, one for Anne’s household and the other for Susan’s. She updates the action to 1919, which gives a DH Lawrence feel to the story and makes it more relevant, although Heywood’s text remains quite intractable in its perfunctory psychology — Wendoll’s seduction of Anne is unbelievably rapid — and its determination to punish the women: Anne, when her adultery is discovered, starves herself to death.

But the stage picture is beautifully realised, with Lizzie Clachan and Vicki Mortimer’s chiaroscuro lighting and meticulous design evoking the declining of Susan and Charles’s fortunes and the initial rising of John and Anne’s material wealth. It is so rare to see a British production that creates this kind of visual perfection that the effect is breathtaking. Likewise, Mitchell realistically fills the stage with the hectic life of a household, as servants bustle around and visitors arrive at the door.

It is also clear that Mitchell addresses the implicit sexual politics of the play. She adds a wordless scene when Anne emerges from her bedroom during her wedding night, with visible traces of blood from her deflowering, to be comforted and cleaned by a servant. Likewise, her pregnancy — implied in the text — is made visible. In the parallel story, Susan is shown contemplating suicide when she is forced to marry Francis. Both women find solace in piano playing.

Most thrillingly of all, the final line of the play, Anne’s epitaph — “Here lies she whom her husband’s kindness killed” — is spoken not by John, but by Susan, thus making clear that both women have suffered similar fates at the hands of so-called good men. This makes the message of the play much more contemporary and less distant than it usually is.

But although this version is abundantly alive with the rhythms of life, the seasons and the clutter of everyday reality, not all of the acting is equally convincing. The cast works well as an ensemble, but neither Liz White’s Anne nor Leo Bill’s Charles are entirely convincing, although I did like Paul Ready’s thoughtful John and Sandy McDade’s reclusive Susan. In general, despite the uneven performances, this is a superb revival.

If you like Mitchell’s work, do also check out her Five Truths, an installation located in the Performance Galleries of the V&A museum which explores the madness of Ophelia by filming her death, which occurs offstage in Hamlet, in five different styles based on the work of legendary directors: Stanislavski, Brecht, Artaud, Grotowski and Brook. Actress Michelle Terry, as Ophelia, a woman killed with an absence of kindness, performs these distinctly different pieces with enormous commitment. And the atmosphere of this space is just wonderful.