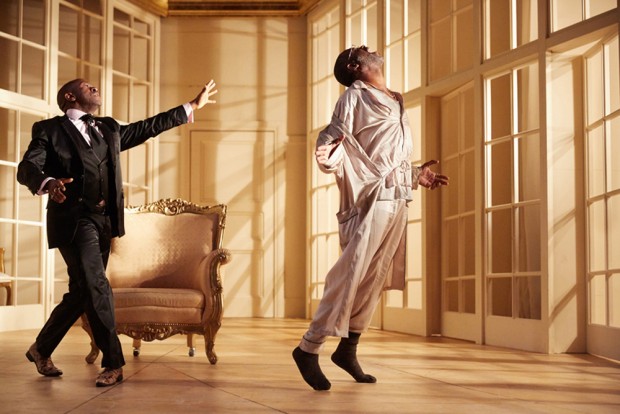 It’s a question of faithfulness. Should an adaptation be faithful to its original source, or can it just take off and roam around like a free spirit? I must say that new versions of classics that stick closely to the original bore me rigid. I mean, if you’re not going to make big changes, why bother? I much prefer adaptations which are imaginative offshoots rather than those which remain slavish growths. Without imagination, Apocalypse Now would never have floated free of Heart of Darkness; Clueless is by far the best film version of Emma. And, refreshingly, faithfulness to the original is not a central preoccupation of American playwright Marcus Gardley’s new one. Although another form of faith, religious faith, most certainly is.

Set in Atlanta, A Wolf in Snakeskin Shoes is a red-hot contemporary adaptation of Molière’s Tartuffe that is both a musical satire and a moral tale of power and greed. Like all the best adapters, Gardley has completely reimagined the original story of Orgon and his infatuation with the hypocritical holy man Tartuffe, turning the originals into the multimillionaire Archibald Organdy and Apostle Toof, a flamboyant Southern American preacher and faith healer. If it reminds me of anything it’s not the usual lame translations of Tartuffe, but re-imaginings of Molière such as Martin Crimp’s outstanding The Misanthrope.

Organdy, a widower whose massive fortune comes from decades of selling fast food, is suffering from a terminal disease. He only has days to live; his life depends on a handful of hourly pills. Summoned by his desperate mother, Toof arrives and the immediate result is that Organdy throws away his medication, a move swiftly followed by his conversion into a born-again Christian — to the dismay of his household. This comprises Peaches, his lover, Gumper, his gay son, Africa, his long-lost daughter, and Dorita, his Mexican maid. Add to this mix Toof’s wife, Lady Toof, and the comic brew begins to bubble. When Organdy decides, in a moment of religious excitement, to change his will, the family realise that they have to get rid of Apostle Toof.

Gardley’s text is written in a lively and highly coloured verse, whose rhymes are both comic and serve to give sparkle to its ideas. What’s most impressive is the energy and subtlety of the playwriting — it leaps off the page and it sings in the air. With its big themes of religious healing, “curing” homosexuality, exploring roots, and the relationship between men and women, this is a spirited satire whose cartoon characters occasionally reveal unexpected depths. At its best, there is a flavour of delirium in the show, enhanced by Tom Piper’s design. The ideas might not be that original, but they are delivered with tremendous punch. If Molière’s central concern — the relationship between credulity and hypocrisy — doesn’t get that much of a look in, this scarcely matters to me.

Gardley attacks not only the literal interpretation of the Bible, but also the way that unscrupulous and self-appointed preachers bolster their own charismatic power by selective quotation and moral distortion. In the very first scene, Apostle Toof attempts to seduce one of his congregation by manipulating her with sweet talk: “I undress sin,” he insinuates, as he proceeds to undress her. But, as Gardley pointedly suggests, she believes that she has just been cured by a miracle, so maybe, just maybe, he does have some special powers. This ambiguity hangs over the whole story.

Certainly, Toof’s arrival shakes up Organdy’s household. The highpoints in an evening of joyful entertainment that is two parts farce to one part caricature include a violent exorcism, a verbal duel between Peaches and Lady Toof, and a tableau of the Last Supper. From the beginning, a chorus sings a handful of songs, thus setting the tone of Southern religiosity, and these are mostly gospel numbers which mix parody and genuine uplift. By the end, we are ready to hear Gardley’s message that those that peddle religion the hardest are those who care the least about its core beliefs.

In Indhu Rubasingham’s raucous and fun production, Lucian Msamati is on fine form as the serpent-like Toof, a portrait combining creepiness and desperate ambition. The scene in which he says grace is a tour de force: man, he really is a wolf! Likewise, Wil Johnson’s Organdy is impressively versatile, and his rages are frankly terrifying. Just as appealing are the women, led by Adjoa Andoh’s vivid Peaches and Sharon D Clarke’s stately Lady Toof, and ably supported by Ayesha Antoine’s Africa and Michelle Bonnard’s maid. Karl Queensborough has a good laugh with the part of Gumper. Politically incorrect, often humorous, occasionally moving, I think that this is a superior adaptation that sings, dances and rants its way to its dramatic conclusion, taking no hostages in its criticism of contemporary follies and providing a bright evening of barnstorming entertainment — just don’t expect any Molière.