Home » Reviews » A Guide for the Homesick, Trafalgar Studios

A Guide for the Homesick, Trafalgar Studios 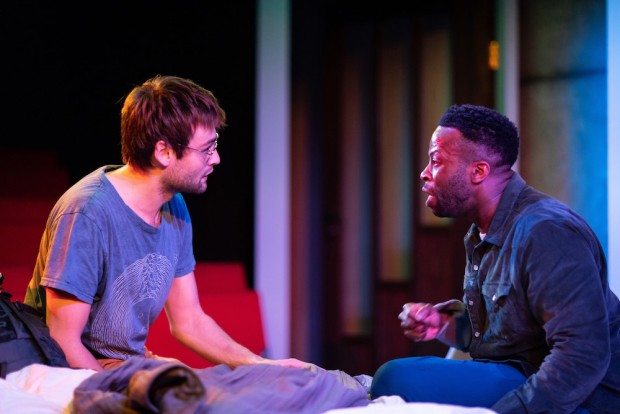 If we call a long journey home an Odyssey, what do you call a journey which is doing everything it can to avoid going home? In Ken Urban’s intense and revelatory new two-hander, which won the Independent Reviewers of New England’s Award for Best New Script when it premiered in Boston a year ago, the homesickness of the title has multiple meanings, from an existential rootlessness to a crisis of sexual identity. Set in a hotel room, itself a no-place of anonymity and ambiguity, in Amsterdam, the story shows what happens when two Americans abroad — played by Clifford Samuel and Douglas Booth — meet and confront their inner demons.

When Teddy (Samuel), a Harlem-born banker who is in the Dutch city on a short holiday with his friend Eddy, meets Jeremy — a younger Harvard medical graduate from a posh background who is returning from working in Uganda — in the hotel bar and brings him up to his room for a drink and a chat, it is obvious that these two strangers are lonesome and both in need of a sympathetic ear. Jeremy has missed his flight connection home and Teddy’s friend Eddy has gone AWOL: he is due to get married and is suffering from prenuptial nerves. Since Teddy is openly gay, we begin to suspect that there’s more to this friendship than first appears. Likewise, Jeremy soon gives us reason to feel that he is not entirely comfortable in his own skin.

As both men drink and talk, the story widens out to reach other parts of the globe. Like many other aid workers, young Jeremy is finding it difficult to return home after his work in Uganda. In particular, he is devastated by the results of his meeting with Nicholas, a gay Ugandan who has had unprotected sex and comes to Jeremy’s clinic. When he is threatened by the increasingly monstrous homophobia unleashed by the authorities in that country, Jeremy’s guilt at being unable to help him is mirrored by Teddy’s regrets about his relationship with Eddy. As both actors play two roles each — Teddy/Nicholas and Jeremy/Eddy — we get a really vivid insight into the emotional reality of their relationships, and Urban brings their memories alive on stage in front of us with well-focused flashbacks showing scenes from the past.

Both Jeremy and Teddy are homesick, not in the sense of hankering for their families, but more profoundly feeling that they are emotionally homeless, without a longed-for connection, and so are their alter egos, Eddy and Nicholas. In Jonathan O’Boyle’s perfectly subtle and, over 80 minutes, increasingly powerful production, on designer Jason Denver’s liminal set, with its bed and television, symbols of both connection and distraction, Samuel and Booth turn in a pair of mesmerizing performances, switching effortlessly and clearly from one character to the other. The power of the acting in this claustrophobic studio space amplifies the story’s intensity and relevance.

The relationships — between Teddy and Jeremy, Jeremy and Nicholas and Teddy and Eddy — resonate with each other, and the psychology of being unable to admit the truth of your sexuality comes into conflict with the vagaries of desire, as well as with the big issues of guilt, regret and responsibility. The suspense of this psychological thriller builds up, raising questions along the way: how far, for a privileged Western man, is aid work in Africa an escape from an uncertain or socially unacceptable sexual identity? How responsible are the Ugandan churches and believers for the horrific homophobia violence in that country? What damage does the social pressure for heterosexual marriage do to individuals unable to feel true to their real desires?

The homesickness of the play’s title not only refers to individual identity, it also suggests a longing for love, for recognition and acceptance, which is sometimes rare not only in African but also in the West. Urban uses the image of global travel to highlight the desperation to escape and the hugely evocative metaphor of the lost whale to vividly underline the need for each of us to have our voices heard. Loneliness is a disease that corrodes our humanity, but human contact can sometimes push us close to the edge. Urban’s writing is superbly theatrical, emotionally convincing and psychologically true. It also has its moments of appealing quirkiness (I’m sure I detected a reference to the hotel room in Sarah Kane’s Blasted) and humour — a great mix.

In an oblique way, Urban also raises specific issues about the relationship between the West and Africa. One exchange suggests that American religious fundamentalists have some responsibility for the cancerous growth of homophobic rhetoric in Uganda; another alludes to Britain’s imperialist past. There’s a terrible moment when a Ugandan mother is shown leading an anti-gay mob against her own son. At the same time, the play also celebrates the power of male desire, masculine attraction and the idea of male need, and male love. At its heart is the powerful idea that to have a real friend is to know that one of you will live to see the other die. In the end, there is a strong sense that trauma can be healed and that the age-old question, “What do I do?”, can find a positive answer, however tentative.

In a theatre space so intimate that when Teddy hums to himself the sound fills the whole room, it’s the performances in this drama that light up the evening. While Booth often burns with a troubled inner beauty, Samuel smoulders with an even more dangerous depth of feeling. At one point, playing Nicholas, he begins to howl — a sound that is as haunting as the stories in the play. Not only is this production compellingly powerful on its own merits, but it also seems to exemplify something that playwright Mark Ravenhill wrote about in The Sunday Times about a month ago: American new writing is simply better than most British new work. Whatever you compare it with, A Guide for the Homesick thrills both the nerve ends and the grey cells. It’s a masterpiece.