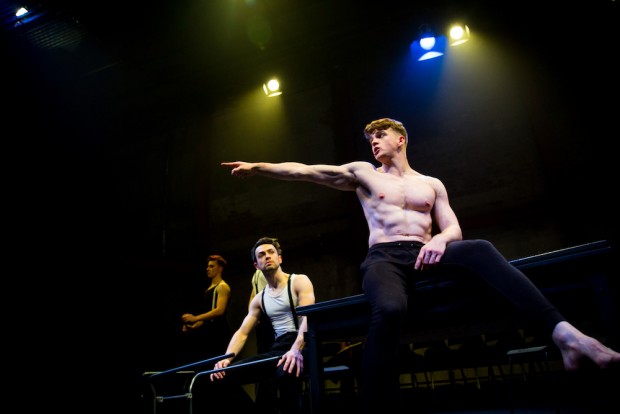 There are few modern literary fables that really resonate in the wider culture. And most that do are dystopias. Think of George Orwell’s Nineteen Eighty-Four, or Aldous Huxley’s Brave New World, or even Philip K Dick’s Do Androids Dream of Electric Sheep?. And, of course, Anthony Burgess’s A Clockwork Orange. This 1962 novel explores the myth of the unique violence of modern alienation in a hectic parable which is told in “nadsat”, a teen language of the future which mixes Russian with English while sporting a distinctly Shakespearean cadence.

Following its success at the Edinburgh Festival Fringe in 2011, this all-male version of Burgess’s own dramatisation of his novel has toured extensively, and been restaged on numerous occasions. (I remember seeing it, with another cast, at the Soho Theatre in November 2012.) Currently revived at the Park Theatre with Jonno Davies as Alex, the lead role that he originally created, it retains a freshness and vigour that both excites and repels. Acted out on a bare, black stage with few props but much movement, Alexandra Spencer-Jones’s swaggering production for Action to the Word has a young all-male cast, which makes this a testosterone-heavy, noisy and boyish production, with most of the violence effectively presented as a mix of elaborate balletic sweeps and ugly brute thuggery. Here the landscape seems to have been vacated by all women, and by anyone able to offer a solution to this version of the crisis of male identity.

The story, familiar from Stanley Kubrick’s 1971 film, concerns a gang of “droogs” led by the said Alex, who not only loves “ultra-violence”, but the music of Beethoven as well. Jailed for a particularly nasty attack, Alex becomes the object of an experiment in aversion therapy. This encapsulates Burgess’s theme: is it better to be compelled to be good or to choose to be evil? It is also a vision of England as a vicious land fearful of the young – and appallingly savage in its political and judicial system. Surely not a fair image of our green and pleasant land…  Talking of which, there’s a couple of moments when Beethoven’s “Ode to Joy” is sung, which after the Brexit vote conveys a tinge of nostalgia for the European Union.

But while Burgess has imagined vivid images for this moral debate, such as Alex’s eyes being forced open to watch hideous movies or his final transformation in a hospital bed, he has provided few ideas for us to get our teeth into. The notion of the human being reduced to the level of a clockwork orange, mechanical and programmed by the authorities, is a powerful metaphor for an authoritarian state, and the way that the droogs eventually become the cops is particularly insightful, but the rest of the performance is mainly decoration. Fun decoration, but decoration nonetheless.

With most characters dressed in black and white, with splashes of orange, the show is visually striking and, very occasionally, uncomfortable to watch. The symbolic story of how the forces of authority — a social worker, a chaplain, a minister and various doctors and politicians — mercilessly exploit Alex is energetic, often cartoonish. This is great if you like dance moves, loud music and sharp stage pictures, but what’s missing is a real emotional connection to either Alex or to any other character. Also absent is any real feeling of criminality or sinister haunting: the droogs are youthful, but not menacing. There’s no sense of danger. You never fear for your life.

Davies’s Alex has a seductive blend of cocky charm and raw pain. He slithers across the stage, he jumps onto tables, he snogs his mates, he snogs his victims, and he commits sickening acts of violence with broken bottles. At one point he wanks over a Bible story. But he exudes charisma and it’s easy to forgive him his transgressions (no one seems to have been really hurt by him). The rest of the large well-drilled ensemble, who play several roles each, includes Sebastian Charles, Simon Cotton, Damien Hasson and Will Stokes. With its exciting rock and dance soundtrack, this is a powerful, if rather mannered evocation of a dystopic future which has already arrived, a point underlined in the prison scenes. I would have preferred something a bit less stylish and a bit more chilling.