A Brimful of Asha, Tricycle Theatre 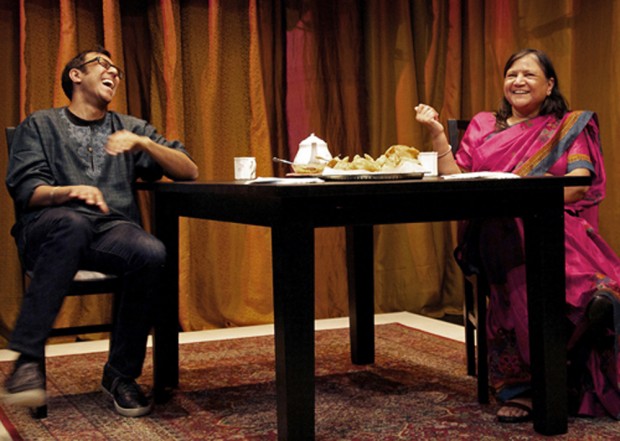 There is nothing more clichéd in Asian theatre than plays about arranged marriages. By now, any self-respecting British playwright who comes from an Asian heritage wouldn’t be seen dead in the company of a drama based on this subject. It’s 2015 for matrimony’s sake! But, to judge from the huge international success of A Brimful of Asha, which first opened in 2010 in Canada, maybe there’s a lot more mileage in this type of conflict than I at first thought. Certainly, this light comedy, which like Lela & Co takes the form of an interrupted monologue, is one of the most charming and affectionate plays currently on the London stage.

The trick is in the casting: Ravi Jain is a Canadian playwright, director and actor who has teamed up with his mother, Asha Jain, who is an Indian businesswoman, but not a theatre pro. The 90-minute show features a table laden with food while Asha, seated at one end, and Ravi, standing, moving and finally sitting at the other, discuss his marriage prospects. The Indian-born and tradition-minded Asha believes that he should marry as soon as his education has been completed, and to the bride of his parents’ choice, while the Canadian-born liberal Ravi wants to get to know his life partner before marriage — and to take his time.

Before a word is said, mother and son welcome you with open arms. The audience come up onto the stage; they are greeted by Asha and Ravi; they are offered warm samosas. It’s like visiting a friend’s house, and this warm and slightly spiced atmosphere of relaxed contentment spreads over the entire show. As cheerful and poppy as the 1998 indie rock song by Cornershop that gives the play its title, a smiling Ravi tells the story of his trip to India in 2007 in a monologue which is occasionally interrupted by his mother, usually with a surprisingly humorous one-liner.

The family dispute is classic and instantly recognisable: Ravi wants to travel around India with his friend Andrew, but his parents want him to meet some prospective marriage partners when he’s there. They expect a quick engagement (one day) and a rapid marriage (by the end of the month). We are introduced to horoscopes and Bio Data charts (which list a groom or bride’s most appealing features). Although the tensions between tradition and freedom are clear from the start, the conflicts are mild and the tone is sympathetic even during the heated climactic argument.

Ravi comes across as the slick professional actor, confident in the stage space and the orchestrator of the various effects — video clips, voice recordings, lighting changes and music — that liven up the evening. By contrast, Asha is clearly not a trained actor (and it’s fascinating to see this in her stage presence). She is more nervous, even shy, and she sometimes fluffs her lines. Still, she’s obviously a great sport! And she is not only very funny, but also her maternal affection is evident, just as Ravi’s love for her is unobtrusively visible. They have a really good onstage rapport, and the show feels fresh, lively and improvisatory — despite the fact that they have preformed it dozens of times.

Within the rather clichéd situation of an attempted arranged marriage, there is a fair amount of subtlety in Ravi Jain’s writing: acting the parts of his father, his uncle and his aunties, he brings out the various gender differences between male and female matchmakers. Although I half-expected him to reveal that the reason that he didn’t want to marry was because he was gay, the actual conclusion of the show is much less explosive. So this production by Ravi’s Why Not Theatre, which is based in Toronto, is basically a feelgood comedy which reminds us of the various cross-cultural and generational tensions that come with global migration and multicultural society, but without troubling us too much in the process. By all means enjoy it, but don’t expect great revelations.