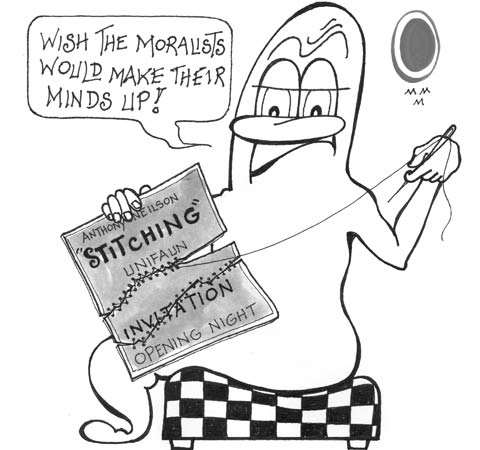 At the risk of being boring, and as I write this I’m watching Pirate Dog trying unconvincingly to stifle a yawn, I find myself drawn back to the case of Unifaun’s censored production of Anthony Neilson’s Stitching, when I’m sure it would be more fun to write about the death of Michael Jackson, genius dancer but creepy white guy. As ever, the Catholic church in Malta is fabulously entertaining, providing a wonderful lesson in sheer hypocrisy and really lamentable stupidity. (Someone should tell the Pope!) It shows that to taste the fine gustation of medieval religious fanaticism you don’t have to time travel — all you need is a ticket to this island in the Med. For an opponent of all of the church’s works, this is clearly a delight for me to read about. So what happened? Well, Fr Joe Abela — a rare instance of a good man in a bad job — testified in favour of the banned play during the recent court case. For his pains, he was then sacked by his archbishop from his post as one of three members of the church’s own private film classification board in Malta (itself obviously a miraculously inspired body). That would be bad enough — a crystal clear case of punishing a liberal and independent-minded priest, an act worthy of the most benighted mullah. But this was not enough for the stinking church of Malta. No, these odorous saints now claim, in an obvious case of bad faith, that Abela left the board after “long cordial discussions”. Well, that, you have to admit, is a really good one! What a joke. One again, this rotten institution and its oily potentates has distinguished itself not by its moral probity, nor its high intellect, but by its abusive use of power. Anybody with a grain of humanity or liberalism should be swooning at the smell of shit emanating from the Maltese church.