Home » Blog » About The Shit 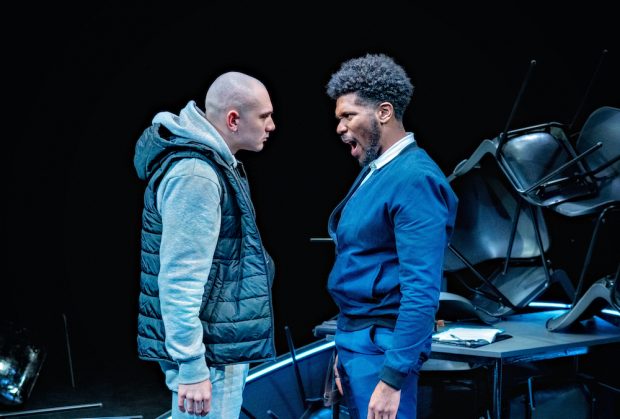 Yesterday, I went over to the wonderful Bush theatre to watch BAFTA-nominated Kenny Emson’s play about youth work, part of this venue’s Essex on Stage fest. The eye-catching title refers to the rough council estate which Daniel, or D, a 17-year-old white north Londoner who has already been in youth detention, desperately wants to get out of. As part of his release conditions he has to attend one-hour sessions with a youth worker at a local community centre. After his first mentor, Brian, gets sacked, this job passes to Eric, a thirtysomething black Yorkshireman who’s lived in London long enough to be a Spurs fan. Their spiky rapport, and Eric’s conversations with his supervisor, are captured in 28 rapid scenes which are characterized by thrillingly sharp dialogue and overt conflict as the angry D mocks the assumptions and prejudices of Eric, who is genuinely trying to help but finds himself hampered by government cuts. For example, D’s need to leave the estate and his former associates by getting on the housing list is an impossibility: so he remains in danger. Over 70 exciting minutes, lightened by flashes of bleak humour, Emson shows the tensions between the two men with enormous empathy and a complete lack of sentimentality. He resists the temptation to sugarcoat the situation and portrays instead the brutal lack of options for both men. His vision of class antagonism and urban alienation is precise and utterly realistic. In Alexander Ferris’s powerful production, designed by Caitlin Mawhinney, Dillon Scott-Lewis (D) and Lladel Bryant (Eric) deliver performances that are throat-grabbingly convincing. Researched by The Working Party theatre company, and having already been seen in Leeds, The Shit is an energetically honest and thought-provoking depiction of emotional truths about life on society’s margins — a place that many would like to pretend doesn’t exist, but which remains a terrible scandal, a running sore, in the continuing age of Tory austerity.