Home » Blog » About Dandy in the Underworld

About Dandy in the Underworld 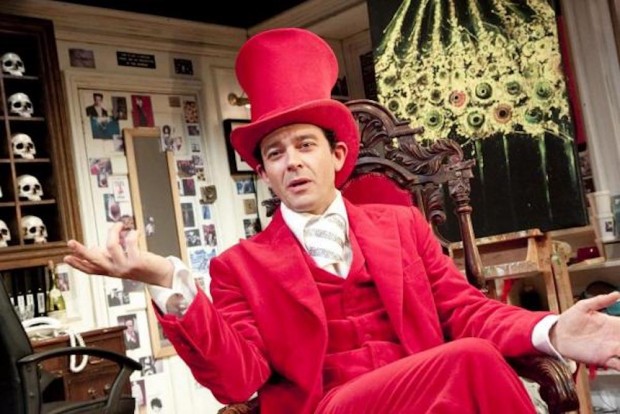 If life is just theatre, then Sebastian Horsley is a one-man costume drama. Having survived a childhood marked by his parents’ alcoholism and a dysfunctional family existence, he then spent his money on prostitutes, Class A drugs and clothes — not necessarily in that order. As a painter and dandy, he is one of Soho’s most colourful characters and his cult autobiography has been artfully dramatized by playwright Tim Fountain as Dandy in the Underworld. In this solo show, true dandyism, Horsley inform us, is a form of rebellion, not a profession so much as a condition. As he slowly changes from dressing gown to scarlet Regency garb, he grows in front of our eyes. While it is clear that his plan to seduce Henrietta, a rep of his Austrian publishers, is doomed, Horsley’s quick gallop through his life and times gives a vivid picture of a man who has turned insincerity into an art form. With his compulsive addiction to heroin and casual sex, Horsley uses vanity to hide his insecurities, which lie quite near the surface anyway. Like a modern Oscar Wilde, or a punk Quentin Crisp, he specializes in bon mots, a typical example being “too many cocks spoil the brothel”. Such larks pepper an evening that, with its stories of failed crucifixion and suicide, is always luridly entertaining. On Paul Wills’s set, which is a loving reproduction of Horsley’s Soho flat, complete with human skulls, postcards, posters and peepholes, Fountain’s production has charm and laughter aplenty. Milo Twomey is boyish, cheery, and occasionally campy. Always engaging, never dull, he solicits and responds to audience reactions. Whatever Horsley is like in real life, on stage his incarnation rules the flamboyant roost.