The Time Traveller’s Guide to British Theatre: An Extract 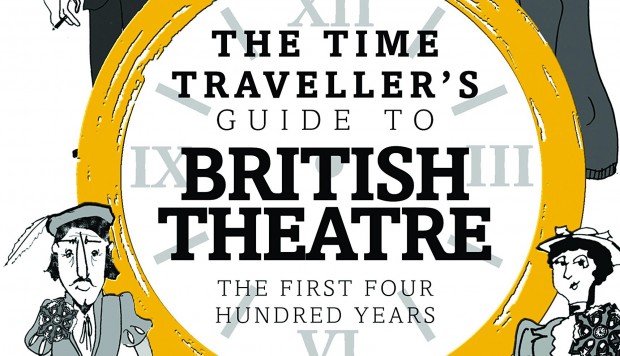 Theatre is one of the glories of British culture, a melting pot of creativity and innovation. Beginning with the coronation of Elizabeth I and ending with the televised crowning of the current Queen Elizabeth, The Time Traveller’s Guide to British Theatre — co-authored with Lia Ghilardi — tells the compelling story of the movers and shakers, the buildings, the playwrights, the plays and the audiences that make British theatre what it is today. The book covers all the great names — from Shakespeare to Terence Rattigan, by way of Oscar Wilde and George Bernard Shaw — and the classic plays, many of which are still revived today, visits the venues and tells their dramatic stories.

As we set out on our journey, we get a helping hand from several fictional guides, characters who live in the past and know all about its customs, rituals, gossip, food, politics, personalities — and, of course, its theatre. These would-be avatars have their own idiosyncracies, personal prejudices and memory lapses. Nevertheless, they recreate and reenact the historical past for us, providing a real sense of what it was like to dwell in olden times. The following extract begins on a fitfully snowy, freezing January day in 1559. It was a time when there were no public theatres in England and when the best show in town was the coronation procession of the monarch:

• OUR GUIDE, WALTER WICKSON is enjoying a hearty breakfast of oat pottage and ale at the Boar’s Head tavern in Eastcheap, a bustling noisy road in the old City of London. As we arrive, he hurriedly finishes eating, wiping his mouth briskly on his sleeve. Walter is in his late forties, has longish, salt-and-pepper hair and proudly sports a neat moustache and a short, trimmed and pointed beard. He is a clerk, but also owns a scrivener’s shop, and has, in the past, been a copyist of play scripts, writing out the parts for actors to learn.

As he sketches out the story of his life, we learn that he’s gone up in the world, his father having been a humble carpenter who worked on staging plays at court. Walter is wearing the clothes of a successful middle-class professional: white linen shirt, dark doublet and hose, with a fur-edged gown for bad weather. He likes to show off, and tells us that he’s the proud owner of well-dyed velvet clothes, but only wears them on special occasions. On the oak-wood table in front of him is his flat wool cap. His hands are sturdy and one of his fingers boasts a large silver ring engraved with a skull, a memento mori.

He’s a fastidious character, tending to get lost in detail, but we’re immediately impressed by his compendious knowledge. We’re less keen on his picking his teeth, though, but then again table manners are a recent invention. Anyway, he explains that on this trip we will be looking at London theatre from the 1550s to 1603, the reign of Queen Elizabeth I.

Walter is a Londoner through and through so he is ideally placed to introduce us to the capital of Tudor England. In the 1550s, he tells us, it is a city of some 50,000 souls, although he’s not really sure about the exact figure. At this time, London covers three main areas: the old square mile of the City of London, enclosed by a stone wall with massive gates and guarded by the grim Tower of London, a place where traitors are beheaded. This prosperous yet densely populated area is the historic heart of the capital. To the West, new buildings are expanding along the Strand towards Westminster. Here growing numbers of landed aristocrats, government officials and busy lawyers make their homes. This area is an upper-middle-class suburb.

By contrast, to the north, east and south of the City dwell large numbers of craftsmen — like Walter’s father — and semi-skilled workers, their number swelled by migrants from the countryside and abroad. Near the river Thames, which only has one ancient mildew-covered medieval bridge, sailors and dockers settle. Walter warns us against wandering around these poor areas at night.

A keen royalist, Walter gives us our first taste of theatre by taking us to witness Queen Elizabeth’s triumphal progress through the City of London. It is Saturday 14 January 1559, the eve of her coronation. As we make our way through the narrow twisting backstreets, we have to tread carefully: the lanes are littered with rotting vegetables, horse shit and puddles of piss. In the summer the stench is unbearable, says Walter, but now — thankfully — it’s winter and we notice the cold on our cheeks more than the smell of the streets.

As we come into broader avenues, we see that the skyline is dominated by the old medieval cathedral of St Paul’s. Sir Christopher Wren’s familiar dome hasn’t been built yet and this cathedral is an old gothic building, with flying buttresses and a stubby tower whose 160-metre spire stabs at the sky. It is surrounded by gabled roofs, walled gardens, parish churches, law courts and royal palaces. Everywhere, just a short walk away from the cramped and stinky alleys, there are frost-covered fields and spiky trees.

Suddenly we step into a crowded avenue and see something truly amazing: over the heads of the multitude, their breath steaming in the cold, we see the 25-year-old Queen Elizabeth. She is bare-headed, as tradition demands, so that her subjects can see their new monarch clearly. What strikes us is the whiteness of her complexion and the ginger colour of her hair. But what is most impressive is the magnificence of her apparel: she wears a mantle of gold and silver cloth, furred with ermine, and her dress is of tasseled silk and gold. On this richest of materials is stitched the red-and-white rose symbol of the Tudor dynasty.

Queen Elizabeth sits on a cushioned seat in a litter decorated with yellow cloth of gold lined with white satin, and borne by two strong mules, also draped in gold. From the sky, a flurry of snow. It’s a cold afternoon so she has a white damask quilt for warmth. All around her are nobles, courtiers, attendants, gentlemen pensioners and sturdy footmen. A thousand people on horseback; a thousand more on foot. It is a carnival of regal crimsons, starched ruffs and flashing jewels. The crowd loves the spectacle; one man weeps for joy; one poor woman hands Queen Elizabeth a sprig of rosemary, a symbol of remembrance. Everyone is cheering, with several cockney voices praising her father: “Good old King Henry VIII”.

As we follow the procession Walter, who warms his hands by blowing on them, calls our attention to the pageants with which the City welcomes its new sovereign. They are little mimed playlets with speeches declaimed in Latin. Crossing London from East to West, Queen Elizabeth watches five of these pageants, each introduced by trumpet blasts: the first, in Gracechurch Street, celebrates her ancestry, harking back to her namesake Elizabeth of York, whose marriage to her grandfather, Henry Tudor, ended the bloody Wars of the Roses. The second pageant, at Cornhill, shows four virtues: Religion, Love, Wisdom and Justice. The third illustrates the Beatitudes from the New Testament: “Blessed are the poor; blessed are the meek.” The fourth features the figure of Time, with one tableau showing a decayed nation under Queen Mary, Elizabeth’s Catholic older half-sister and the previous monarch, and another a flourishing nation under the new queen.

The final pageant, at Fleet Street, depicts the new queen as Deborah, the Hebrew prophetess of the Bible, and predicts that, like Deborah, Queen Elizabeth will rule in harmony for forty years. In fact, Walter whispers, she will rule for forty-five years. Yes, this is Gloriana, the shining star of the Elizabethan world.

Our next stop is the Inner Temple, one of the four inns of court. Walter knows it well because his son, Wilt, is a student here. We can’t see much, but in the light of flickering torches Walter hurries us through gothic oak-panelled passages in an old building that functions both as a training ground for lawyers and as a third university (the other two are Oxford and Cambridge). We can hear music and see people dancing, and Walter says that revels are being held to celebrate Robert Dudley, one of Queen Elizabeth’s favourites and the future Earl of Leicester. It’s a glittering occasion.

The word that comes to mind when describing Leicester is “magnifico”. The man loves his clothes, which drip with jewels; he entertains his sovereign at vast expense, perhaps because he has designs on the Virgin Queen. With his carefully trimmed moustache and beard, and his severe look, he is every inch the noble courtier. And he’s a patron of the arts. We see jesters and musicians, as well as actors preparing their interludes, the short playlets that, Walter says, are all the rage. There are shouts, cheers and the sound of drums. But what’s that funny smell? Tallow candles, says our guide, made from animal fat…