Brexit Is Our Suicide Note 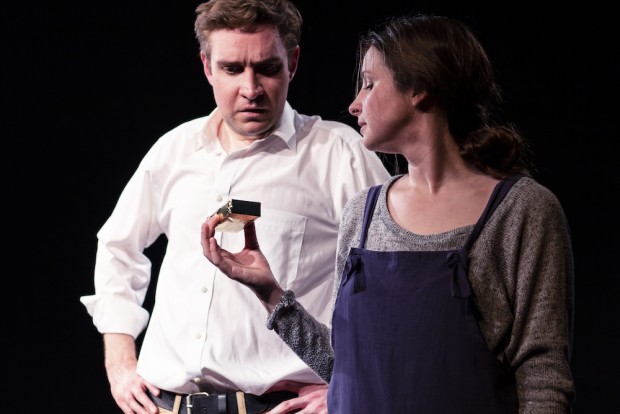 In April and May, Four Points Theatre company staged a new production of Edward Bond’s Have I None, on the play’s 20th anniversary, at the Etcetera Theatre in London. It is a prophetic play which resonates ever more strongly in the current political context. Directed by Lewis Frost, the drama is both frenetically comic and deadly serious. Set in 2077, it shows a state that has abolished the past. Frenzied mass consumerism has been replaced by standard-issue houses, furniture and food. The old cities lie in ruins and people have been resettled. Sara (Emily Wickham) is unhappily married to Jams (Ben Jacobson), who works for the security services, but when a man (Brad Leigh) turns up at their door claiming to be her brother and holding a photograph of two children, Sara’s memory stirs.

There are plans to remount this production. In the meantime, this is a piece that Bond has written on the occasion of the play’s revival.

Brexit Is Our Suicide Note by Edward Bond

Twenty years ago I wrote Have I None. It’s set in 2077. When I re-read it I was surprised. It is about a UK of panic, fear and repression. It even anticipated the wave of knife crime. Then came Brexit. Brexit is the last battle of the Second World War. Have I None is a comedy about a farce.

Suddenly our institutions are falling apart. For years we have lived a hollow pretence. When war ended in 1945 we would not repeat the disasters that followed the First World War. We would build a new humane society. It lasted thirty years. Then our elites tore it down. Of course they had wanted to get rid of Hitler, he was invading their patch, stealing their pickings. But they restored the old order of rich and poor, them and us. In the Brexit referendum more people voted to leave than in any other election ever? But more people voted not to leave than in any other election. Does that justify the leavers denying the others their birth-right of free choice for ever?

It was the voice of the people? What people? It was the lies of the rich and their gutter press, the fantasies of the privileged whose heads are so full of noxious confusions they can’t see beyond their eyeballs. It was the voice of democracy? What democracy? We don’t live in a democracy. I give only one fact. Billionaire businessmen and bankers pay themselves millionaire bonuses in a society where poor children are fed from charity food banks. A society that tolerates that for one day — one hour — is shameless, vicious and undemocratic. We want our country back? It’s not your country. How many acres do you own? How many mansions? Where are your tax havens? Did you go to Eton, Harrow, Oxford to learn the skills of deceiving others and above all the high culture of deceiving yourself?

You can tell lies from the way they’re told. Chronic lying creates its own voice. Jacob Rees-Mogg, the Talking Dead, expressionless voice repressing permanent rage. Boris Johnson, a one-man motorway pile up of history, born with his last words for ever in his mouth. Poor eternally-bewildered Michael Gove, voice damp with tears of self-pity. Such people are both pathetic and lethal.

The three claims — the people, democracy, country — are exactly those made by Hitler. For Hitler totalitarianism was the perfected form of democracy. And because the rich own our mass media we live in a “totalitarian-democracy”. It is frightening how Brexit stimulates Hitlerite racism and anti-Semitism. You can easily find them submerged in our own social-psyche. After Germany lost the First World War Hitler promised to give the Germans back their land and their self-image. Hitlerism depends on the sense of loss — the loss all elites feel when the world changes and they lose the power they thought was theirs for ever. And the “little people” — who never had any power — identify with them out of their fear and impotent weakness. Hitler claimed that he and the people were one. In a Downing Street broadcast Theresa May spoke as if she were the people addressing her own Third Reich. She spoke with authoritarian conviction although her lies were blatant. (Hitler: “If you want the people to believe the lie make it big.”) It was brutal and frightening. She was Mrs Hitler and we were already the embers of a nation.

Now grotesqueness has reached a point when people caught up in it no longer know what they are doing or even saying. The Tory party damaged our nation by choosing the grotesque Theresa May. Now it is choosing the even more grotesque Johnson. I listened to David Davis — always ga-ga but at least respectable — on the radio trying to persuade himself he believed what he was saying about Brexit. Grotesque!

Capitalism now creates social technological and consumer problems too severe for it to solve. Once politics responded to, or at least gestured to, human want and suffering. Not now — that would be too demanding. Instead Conservative politicians become comics and clowns — Trumps and Johnsons, megalomaniac shrimps, fantasists. Johnson behaves as if he is running the European Community (he probably even fantasises he is!) —so that he can tell it not what it should do but what it will do!

Small clues can be the most telling in great crimes. Johnson relaxes by playing with toy buses (once it was always toy trains). He won’t publicly talk about his private life in order to protect his partners and children? A noble posture! — the point is he doesn’t protect them in his private life; if he did there would be nothing to publicly talk about. We should not be misled by his reeking cartload of guile and hypocrisy.

So what is our situation? Conservatism is slipping irrevocably to the right, and not just in the UK. Already the slippage shows in the grotesque gothic politics of Rees-Mogg and his fascist admirers. When told part of his argument might be Nazi he denied it because he said Hitler ran death factories and he wouldn’t. That’s what people would expect of him, though some of his admirers will be disappointed. But Mussolini and Franco didn’t run death-factories but they were fascists, and it’s on record that even Hitler, when he thought of what he would have to do to be a good fascist, wept. It’s not a matter of what Rees-Mogg wants but the logic of what he wants. It’s the logic of the situation.

Thirties fascism was created by ideological monsters. Modern fascism will not be the same. It will be worse — because it is being created by political comics. Brexit is only a symptom. We are faced with a crisis not just of the UK, the West and democracy but of the human species. Society, all human culture, will break in pieces and in time cities will become flattened wastelands of roaming beggars and dead. Is it now me who is being grotesque? No, we should learn from the past.

Decline always begins slowly, even piecemeal — but the fall is rapid.