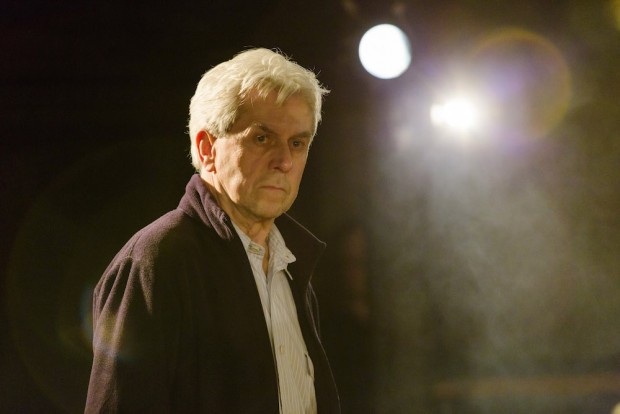 A day or so after Theresa May’s keynote speech about Brexit the words Europe and European carry an electric charge. For Leavers, they represent the evil empire; for Remainers, a world we have lost. In this context, seeing a play by Germany’s most performed playwright feels more than usually significant. Although Roland Schimmelpfennig has loads of plays to his name, only a handful have been staged in this country so this is a good chance to catch up with his work. The fact that Winter Solstice is billed as a razor-sharp comedy whose subject is Nazism only adds to the interest that radiates from this occasion.

The plot is wryly traditional. It is Christmas Eve, and we watch a family gathering: a successful middle-class couple, Albert and Bettina, prepare to celebrate the festive season in their beautiful flat with their seven-year-old daughter Marie and Bettina’s mother Corinna. It’s a cosy situation, compromised only by the usual bickering of husband and wife, mother and daughter. Except that this year is different. This year, 60-something Corinna has met Rudolph, a well-mannered silver-haired gent, on the train (which has been delayed). And she has invited him to the family home. Also expected is the couple’s friend, Konrad, an artist whose large abstract painting hangs on their spacious wall.

The characters are neatly drawn, and instantly recognisable. Albert is a successful publisher and writer, who specialises in books about fascism, society and culture. His latest is titled Christmas in Auschwitz. He’s a classic intellectual, with a middle-aged man’s attraction to the younger female members of his staff. His wife, Bettina, is a film-maker, whose work — her mother Corinna tells us — is only watched by a handful of people. Ouch. But she’s also attracted to Konrad so there are enough tensions here to keep the yuletide pot boiling nicely.

The mysterious guest, almost a theatre cliché, is Rudolph, cultured, charming, urbane and wise. Corinna clearly fancies him, and he is Mr Smooth, all compliments and cultivated conversation. When he sits down at the family’s piano, he plays Chopin and Bach. But although Corinna is happy to see him, and Bettina accepts his presence, Albert is suspicious. There’s something not quite right about Rudolph. He claims to come from Paraguay, to have been born there. But wait a minute. Wasn’t that country a haven for Nazis after the end of the Third Reich? He calls Corinna by her middle name of Gudrun, surely a Wagnerian affectation. And we all know what Wagner thought about the Jews. When Rudolph starts talking about the solstice, about ancient folk myths and the rule of the strong, Albert seems about to lose control.

Schimmelpfennig catches the right note of ambiguity: is Rudolph an emanation of German history, a kind of ghastly reincarnation of Nazism, all the more persuasive for being so subtle and so refined? He’s not openly racist, but his eloquent theories of life have ominous implications. Or is he just a harmless old man? Is it Albert, popping pills to ease the pressure in his chest, and mixing medication with red wine, who is the victim of history, of his obsession with Germany’s dark past? Increasingly paranoid, Albert looks as if he might just snap. And it won’t be pretty.

Schimmelpfennig’s work has been actively promoted in this country by Ramin Gray and the Actors Touring Company, and this elegant translation by David Tushingham sounds perfectly natural. It requires the actors to voice the stage directions and Gray’s compelling production begins around a rehearsal room table, covered with all the everyday paraphernalia of working theatre people. They act the dialogues, speak the stage directions and use whatever object is at hand to create the scene: so a pencil becomes a cigarette, a tangerine a glass bauble, a table the piano. This illustrates perfectly the adage that theatre happens in the mind of the audience. We each picture our own version of the story.

A co-production between ATC and the Orange Tree Theatre, Winter Solstice should, in the age of Brexit and Trump’s inauguration, glow with relevance. But somehow it doesn’t. Although its portrait of a complacent middle class family is convincing, the politics of the piece don’t translate very well. Surely the problem with Brexit and Trump is not that these are emanations of old Europe — cultured and cultivated — but that they expressions of unabashed vulgarity and brute prejudice. Apart from one dramatic moment, this demented populism is only hinted at. The real gut fascism that is on the street, and on the march, doesn’t get a look in. It stays out in the cold.

Still, over a continuous 110 minutes of uninterrupted stage time, the solid ensemble cast certainly hold our attention. Although not word perfect, Nicholas Le Prevost gives Rudolph a quiet kind of charisma which contrasts nicely with Laura Rogers and Dominic Rowan’s increasingly desperate couple. Kate Fahy and Milo Twomey are both equally convincing as Corinna and Konrad. The production’s stated aim of not illustrating the spoken stage directions with the actors’ actions is not always rigorously enforced, but Lizzie Clachan’s design allows the actors complete freedom to build a Christmas tree from the objects at hand, and the playwright’s jokes, a couple about Mein Kampf, elicit nervous laughter. It’s quite a fun evening, although for long stretches more like a radio play than a staged event. I just wish that the satire was more savage and the targets more relevant.