Home » Reviews » I Am the Wind, Young Vic

I Am the Wind, Young Vic 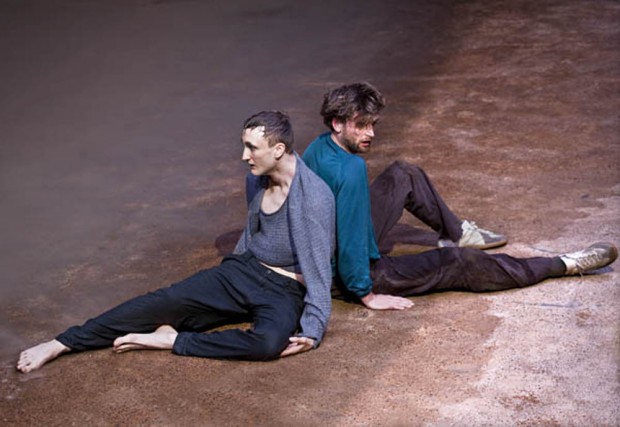 Today’s Britons are a minor miracle of globalised taste. Typically, we are amazingly eclectic: we eat curry and sushi, read Swedish noir or South American magic realists, dress like Italians, drive German cars, listen to world music. Our houses are full of Scandinavian design. Our favourite films are as likely to be made in China or Afghanistan as in Hollywood. So, watching the British premiere of a new play by Norwegian Jon Fosse directed by French theatre legend Patrice Chéreau, one is compelled to ask: why are we so suspicious of foreign drama?

One reason must be aesthetics: we are so firmly wedded to bog-standard naturalism and social realism that European theatre traditions of abstraction, absurdism and post-dramatic theatre tend to strike us as cold, pretentious and boring. Reviewers dismiss the unfamiliar as crap because it’s easier than questioning their own received opinions. Sure, Fosse is a challenge: although he’s the most performed living playwright in Europe (eat your hearts out, Alan Ayckbourn and Tom Stoppard), with 900 productions in 40 languages under his belt, as well as a shelf groaning with awards, his work is often bleak and difficult.

Still, I Am the Wind is an account of a simple situation, a death at sea: two young men go sailing in a small boat. Their names are The One and The Other. They banter, sometimes awkwardly, sometimes in a friendly way. They find a small cove, and return to the shore, with The Other getting slightly injured as he jumps from the boat. He soon returns. They have a drink, they talk some more; they eat, they talk some more. They leave the shore again: this time, The One steers the boat out into the great wide sea.

Of course, Fosse’s subject is the human condition, and this beautiful, sparsely written play pares down the question of existence to its bare essentials. It’s a meditation on the subject of depression and death, and is suffused with a feeling of being homeless in a beautiful but comfortless world. At times, it feels like a Q&A festival: what do we want from life? Why do we keep changing our minds? Can words ever communicate our meaning? Is empathy possible? Why do some people kill themselves?

Fosse, of course, refuses to give any answers, and his writing is ambiguous in all the right places. Although the play begins with a vivid image of death, the relationship between The One and The Other is deliberately multifaceted. They could be friends, or brothers, or maybe two sides of a single personality, the voices inside ourselves. As a picture of depression, when it is almost impossible to reach the depressed individual, it is grimly convincing. And the nagging Beckettian questions which make up so much of the text represent not only an existential quest, but also describe the relationship between humans and an unforgiving and uncaring nature. Time flips back and forth, and the sea itself becomes an image of death.

Chéreau’s production is a masterclass in minimalism, perfectionism and maybe a dozen other isms. Who cares? It tells Fosse’s story wonderfully well. Working with his favourite designer, Richard Peduzzi, his set is a bare and sandy expanse, which slowly fills with shallow water, and then — in a coup de théàtre — gives rise to a wooden platform which represents the boat on which the two men sail out to sea. Because this platform is soaked in water, and bucks and heaves, the play feels dangerous, its inevitable outcome sometimes oddly uncertain. While the water ebbs and flows, you become aware of the smell of the damp clothes, you begin to glimpse the subtle projections and then listen to the atmospheric music.

Playwright Simon Stephens’s flinty translation is both colloquial and poetic. And his dialogues are compellingly brought to life by Tom Brooke (The One) and Jack Laskey (The Other), the hardworking cast members. Brooke is the obsessive, depressed individual, with his starring eyes and gangly frame; Laskey plays the weaker character, constantly making enquiries, always helpful, ever vigilant, often scared. At one point The One rejects The Other, and it feels like a body blow. At 70 minutes, this is a short play, but a remarkably tense one. European theatre may be more abstract, more bleak and more difficult than British theatre, but this does not mean that it’s not worth making the effort to enjoy it. Go on, give it a go!