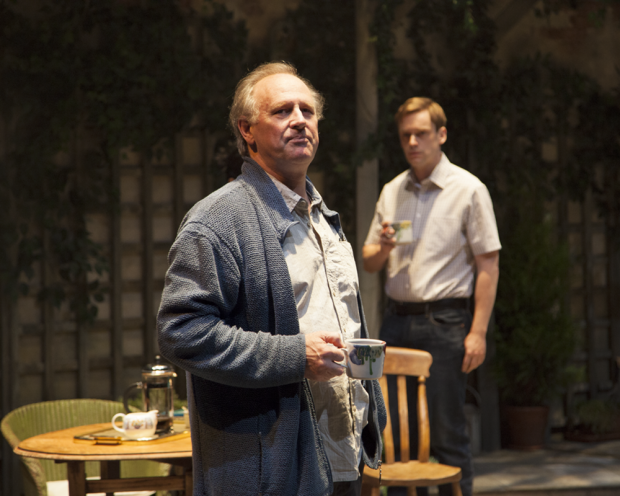 In the context of recent events in Iraq and Syria, the spectre of the ill-fated Iraq War of 2003 looms large once more. What better time for a revival of master-playwright David Hare’s story about conflict and personal relationships? As parliament is recalled to debate bombing the Islamic State, The Vertical Hour — which premiered on Broadway in 2006 and was then staged at the Royal Court two years later — opens at the smart Park Theatre in London’s Finsbury Park. But just how relevant is it?

Like most of Hare’s work, this is a play in which the personal is in bed with the political. Nadia, the central character, is an American war reporter with lots of experience in the Balkans and the Middle East. As the play starts, we see that she has swapped career and now teaches on an international relations programme at Yale. She’s an expert on the politics of military intervention, which she argues is a good thing, and her advice has been sought by the President. But it’s Nadia’s private life that powers the story: she is in love with an expat English osteopath, Philip, who takes her with him on a rare visit to see his father, Oliver, at his home in deepest Shropshire. Oliver, a chatty and humanistic GP, is against the Iraq War — and soon sparks are flying as Philip’s father and Nadia argue into the night. In his ideas about war, Oliver embodies the patronizing attitude that many Brits have about the US: we know all about Empire — you have yet to learn.

As well as making points about the culture of fear — “There was far more terrorism in the 1980s,” says Nadia, “when nobody thought about it than there is today when nobody thinks about anything else” — the play also outlines the differences between Oliver’s ironic scepticism and Nadia’s willful idealism. Yes, it’s a big bold play which covers issue after issue: life choices, love choices, terrorism, psychology, politics, patriotism, poetry, self-doubt and well-being, family, education, medicine and the 1960s. Phew.

Nadia is a typical Hare creation: part idealised female, part troubled woman. Despite the fact that she is a liberal, her support of the Iraq War is perfectly convincing; and so is Oliver’s opposition to military adventures. Their different attitudes to power and patriotism also symbolise the differences between British and American cultures. Still, it’s obvious that these two are never going to agree: if, as Nadia argues, “politics is about the reconciliation of the irreconcilable”, then Oliver and Nadia need more than politics to bring them together. Hence Philip, the most underwritten of the three. With him, the drama quits the political arena and moves much more confidently into personal territory. It’s not long before we understand that the relationship between Nadia and Philip is that of a safe, but a bit undemanding couple. It lacks passion. The real fireworks fizz between Philip and his father: the son thinks that Oliver is trying to seduce Nadia, and blames him for the misery of his mother’s life. The father thinks that Nadia is just a bit out of his son’s league.

The father–son aspect of the play is thoroughly engrossing, and there is a deep pit of ambiguity at the heart of the situation. There’s some loose talk about psychoanalysis, and this highlights the way that Hare shows how all his characters are motivated by both conscious and unconscious desires, and needs. On one level, it’s a story about how hard it is to really know anyone, including oneself. Yet, at the end, Hare refuses to offer any neat psychological punchline. And for that we can be thankful.

Nigel Douglas’s fine revival, which is designed by Charlie Damigos, features some intimate and detailed performances from Thusitha Jayasundera as Nadia, Peter Davison as Oliver and Finlay Robertson as Philip. Despite the occasional shaky moment, their set-piece conversations, intelligent, probing and passionate, are a joy. Not only does this play have a renewed relevance and urgency, it is an inspiring piece of playwriting.