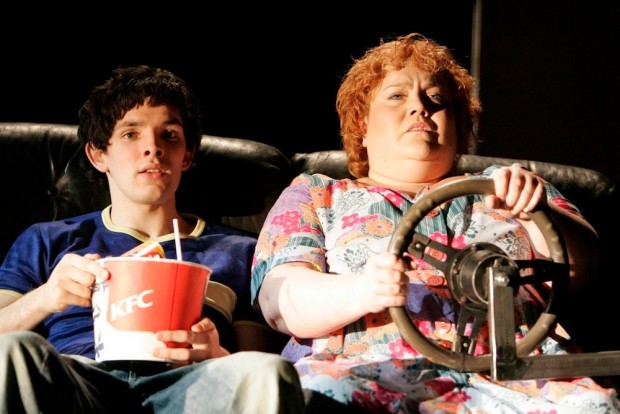 Anger at injustice is one of the good emotions — it makes you feel better in a righteous kind of way, it brings clarity to complex problems and it is the fuel behind the desire to make a better society. But what happens when a play stages an instance of injustice and then refuses to take it seriously? Do we sigh with relief because we have been distracted by an evening of light entertainment, or should we be annoyed with the production?

The return of Young Vic’s 2007 stage adaptation of DBC Pierre’s Man Booker-Prize-winning novel, Vernon God Little, is a case in point. The setting is deepest Texas, and the action begins in the wake of a school massacre in Martirio, a smallish town which is a symbolic purgatory. Although the killer, Jesus Navarro, has turned his gun on himself, suspicion falls on his best friend, the loner Vernon. Now Vernon is only 15 years old, but the town’s grown-ups soon victimise him in what develops as a satire on the American love of public spectacle and self-made men.

One character, Lally, for example, is a TV repair man, but he successfully pretends to be a top journalist, and talks himself into the spotlight. Likewise, the teen Pam — who Vernon just meets casually — is a wannabe celeb who lands a job in television when she betrays the boy. From the local sheriff to the judge and prosecutor, this gallery of grotesques isn’t especially funny, but the characters are vivid enough in a cartoonish way. Despite his innocence, Vernon can’t even convince his mother that he had nothing to do with Jesus’s killing spree, and eventually he ends up on death row. Clearly, this is a savage injustice, and a grim comment on the punitive tendency of the American Way.

Adapter Tanya Ronder’s version of the novel is certainly fluent and, in the first half, the action races along nicely. Vernon God Little paints a livid portrait of the society of the spectacle in which all human relationships are mediated through television, showbiz or some commercial transaction. This is life as seen through a screen darkly. Not so much the American Dream as a case of fear and loathing. Rufus Norris’s production, designed by Ian MacNeil, sketches out this corrupt world and is highly theatrical, with sofas turning rapidly into cars, and supermarket trolleys doubling as police vans. If the effect is rather rough and ready, often clunky, maybe this is because it’s meant to evoke reality as seen through the eyes of a teenage boy. But, quite quickly, I found that the restless cartoonish movement grated on my nerves.

Likewise, while I like the idea of having music as a constant presence in the staging, with dialogues spliced with country and western songs, black spirituals and sweet soul music, there are moments when it is hard to hear the dialogue because of the singing (which kind of defeats the point). So, although the play is delivered with zest and humour, some of it is difficult to follow, and the story occasionally disappears from view. The show slows down a lot in the second half, as Vernon goes on the run and gets ever deeper into trouble.

Newcomer Joseph Drake gives a great performance as the gawky, bemused and often troubled teen, and the supporting cast — which includes Daniel Cerqueira, Clare Burt and Lily James — effectively play several roles each. But although the message of the play — we must become gods rather than dogs, and treat one another with greater care — is unexceptional, the ending is outrageously irrational. While logically Vernon should die for the crime he did not commit, the play pulls away from this grim conclusion. The author’s hidden hand plucks him to safety, and delivers a happy ending, thereby defusing the sense of injustice that had been built up over the show’s three-hour length. When a play can’t take its own moral message seriously, there’s no reason why its audience should. Satire shrivels into triviality.