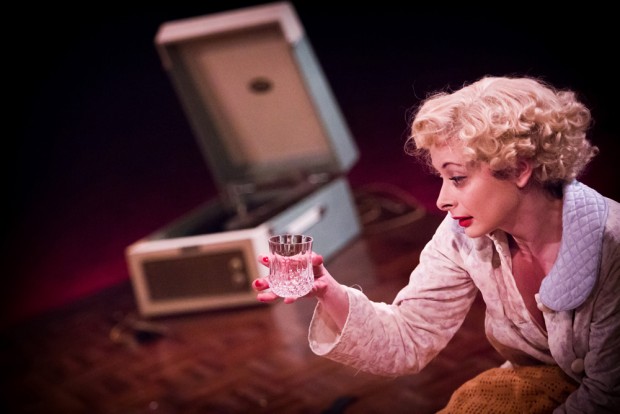 Ruth Ellis, the last woman to be hanged in Britain, is a cultural icon, her image that of the peroxide blonde who spells big trouble. An influence on Diana Dors in the 1956 film Yield to the Night, she was played by Miranda Richardson in Dance with a Stranger in 1985. Last year, a new biography, Carol Anne Lee’s A Fine Day for a Hanging, was published. Now, playwright Amanda Whittington tracks down this fraught and troubling figure.

First the facts: by the time Ellis met the racing driver David Blakely in 1953, she already had a young kid, born when she was 17, and had quit a violent marriage to an older divorced dentist. Now, after a career as a model and nightclub hostess, she was managing a nightclub. Although her affair with Blakely was passionate, neither of them was faithful during its course. Nevertheless, after he walked out on her, she shot him dead and gave herself up to the police. Her trial lasted less than two days. She was executed on 13 July 1955. She was 28 years old.

Whittington’s play attempts to answer some of the nagging questions behind this apparently cut-and-dried case. Why did Ellis plead not guilty, but offer no defence? Why did she show no remorse? And just who was she trying to protect? The good news is that the playwright has successfully connected to the emotional answers to these questions. And her appealing way into the story is the introduction of a narrator, Detective Inspector Jack Gale, who is our guide for the evening. Gale introduces us to the rather seedy world of London nightclubs, with their hostesses and dodgy clientele. Whittington hints at links with the notorious Cliveden set, which about half a decade later was involved in the Profumo scandal. But the body of the play shows us the female friendships at the heart of Ellis’s story. We meet Sylvia Shaw, a nightclub manager, Vickie, a model, and Doris the char.

It’s the 1950s, and their relationship is deftly set in the context of the emerging celebrity culture. All the women immerse themselves in the blues of Billie Holiday, showing how — right from the start — pop music offered a vision of glamour while at the same time providing consolation. The clubs might be tawdry, but the women working in them have dreams and fantasies. Whittington captures the fierce protectiveness of these working-class women, their cheerfulness in adversity, which survives their bitchiness and petty jealousies. At the same time, behind their hard exteriors these are vulnerable youngsters, with chronically low self-esteem. Ellis is obsessed with her lover Blakely, but her tempestuous and jealous scenes conceal a massive neediness. Her feelings spill out in a binge of alcohol and self-destructiveness.

And we are not spared Ellis’s suffering, her ectopic pregnancy and her lover’s violent outbursts are graphically shown. Apart from Gale, however, there are no men on stage. This is a story about women. It is also a very discrete reading of Ellis’s life story — there is no mention of child abuse or bad sex. It avoids clichés and, in James Dacre’s confident production, matches some great frocks with both girly silliness and images of female friendship. Amid the tragedy, there’s a sense of fun. If none of the actors have the real steel of 1950s women, Faye Castelow is a reasonably convincing Ellis, and she is well supported by Hilary Tones (Shaw), Katie West (Doris) and Maya Wasowicz (Vickie). Robert Gwilym is Gale. The production, which opened in Newcastle-under-Lyme, evokes an atmospheric world, partly tacky, but partly appealing. But its real strength lies in its emotional truth and its warm sympathy.