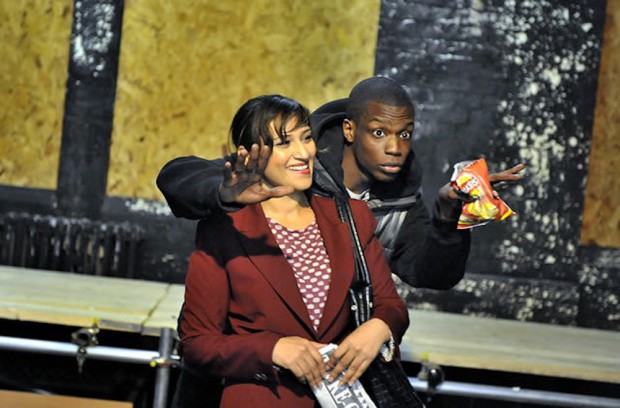 Theatre Local is the name of an excellent initiative by the Royal Court, which aims to take plays out of its respectable Sloane Square base and stage them in more edgy parts of town. Last year, the season began with a revival of debbie tucker green’s hard-hitting play about knife crime, Random, which was effectively relocated to a shopping centre at the Elephant and Castle.

This year, the location is the Bussey Building in Peckham, a former cricket bat factory which is now a cultural centre. It is the site of the premiere of young writer Rachel De-lahay’s debut, The Westbridge, a piece developed while she was participating in the Royal Court’s Unheard Voices Writers Programme, being part of a group comprising young Muslim writers. An important initiative, but is the play any good?

Set in Battersea, it paints a picture of urban life that is sexually, emotionally and racially complex. The lynchpin of the story is one family: Saghir is a Pakistani man who runs a local convenience store. Now divorced, his wife is white and so his kids, Ibi and Soriya, are mixed race. But while Ibi has had an arranged marriage with a young woman from Pakistan, Soriya makes a different choice. In her 20s, she flatshares with George, a white British woman, and at the start of the play we see her lover, Marcus — mixed race White-Afro-Caribbean — moving in with them. Marcus is also part mentor, part hero to 16-year-old Andre, a black Briton who lives with his mum, Jamaican Audrey, a neighbour of Saghir’s. Nearby, lies the notorious Westbridge estate.

The relationships of the characters are brought to crisis point when a rumour spreads that a young Pakistani girl has been gang-raped by black teenagers. Messages on facebook and twitter help circulate the news and a riot soon erupts, recalling both similar disturbances in Birmingham in 2005, although the racial mixture was different, and this summer’s violence.

In the play, Andre is accused of participating in the rape. At the same time, Soriya brings Marcus home to meet her father and brother, who was once the boyfriend of George, and questions about how members of various ethnic groups relate to each other are raised and talked about. Issues of personal and national identity are strongly debated.

As you’d expect, De-lahay writes the banter of the twentysomethings, and the exasperation of their parents, with an acute ear and impressive emotional sensitivity. The play is funny, fast-moving, timely, and its focus on mixed-race identity feels relevant, even if it’s not really urgent. The main problem with this piece is that although it vividly recreates contemporary reality, it is unadventurous in its style and form. The storytelling is linear and a bit soapy, owing more to Hollyoaks than to Tinchy Stryder. There is an enjoyable playfulness in the dialogue, but no playing with theatricality. It’s real alright, but no more so than the view from my Brixton window.

In its Peckham location, with makeshift platforms ranged around a distressed room full of chairs facing different directions, visiting The Westbridge feels exciting and Clint Dyer’s energetic production (designed by Ultz) is powerful, often moving, although sometimes a bit lacking in focus. Its mainly young cast — led by Chetna Pandya (Soriya), Fraser Ayres (Marcus), Ryan Calais Cameron (Andre) and Daisy Lewis (George) — revel in the play’s humour, but for all its appeal this is more of an apprentice piece than a perfect play.