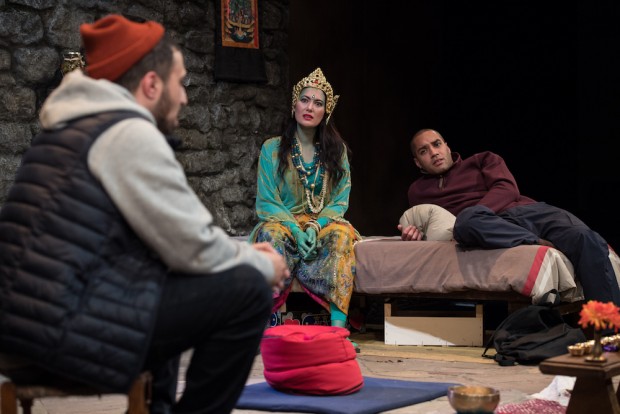 Is Buddhism a path to finding spiritual enlightenment — or just an excuse for not facing your personal problems? Given that this question is implicit in the debut play by Sam Bain, script co-writer of nine series of Channel 4’s Peep Show, as well as having other credits on Fresh Meat, Babylon and Four Lions, you’d expect the answer to be the latter. And you wouldn’t be wrong. But, as The Retreat opens at the Park Theatre, can Bain — with help from director Kathy Burke — transfer his sitcom skills from the small screen to the stage?

Set entirely in a one-roomed hut in the Scottish Highlands, The Retreat tells the story of thirtysomething Luke, who has quit his high-powered City job to become a Buddhist. But just as he is settling down to a bit of chanting and meditation, his karma is ruffled by the unexpected appearance of Tony, his older brother. The two men make a nice contrast: one is an ex-investment banker; the other works for Deliveroo. One is seeking spiritual enlightenment; the other just wants to get high. One loves the solitude of the countryside; the other loves London. One is celibate; the other wants a woman. One wants to be pure; the other gets down and dirty.

Ostensibly, Tony wants to tell Luke that one of their distant relatives, a great uncle, has died in far-off Vancouver, and shouldn’t they both go to the funeral? But we, and Luke, suspect that he has other motives. And we, once again, are not wrong. But before the family conflict between the two brothers can really heat up, in comes Tara — half Irish hippy, half cool Buddhist — who is dressed in green body paint and wearing a glittering tiara. She thinks she’s a Buddhist deity called Green Tara, and her retreat involves chanting a hundred thousand mantras. She refers to unbelievers as “muggles” and wants to build a shining Buddhist temple on the hill.

The core of the drama is a tug of something-less-than-love between Tony and Tara over Luke, who seems hostile to the one and besotted with the other. But as material factors emerge (Tara needs money for her temple and Tony needs money to pay off his debts), Luke’s spiritual retreat is threatened with the more mundane facts of everyday life. He may have quit his job, and left his emotional attachments, but he still owns property — and that can lead to some very unspiritual decisions. On top of this, there’s quite a lot of talk about belief, the difference between religion and science, sibling rivalry, parenthood and life choices.

So although Bain writes some good jokes, and tells his story with economy and pace, this 90-minute drama mostly feels rather flat and inert. Partly, this is a result of Bain’s rather cynical view of life, in which vulgar reality always seems to outbid any deeper emotion, and sex is more important than any other human feeling. Of course, it’s always great to see smug religiosity being pulled down a peg or two, but there’s a relentless scepticism here which shades into downright cynicism. And that quickly becomes tasteless. In the end, The Retreat teaches us very little, and its dharma feels grubby.

Despite some of the zing in the playwriting, Burke is unable to breathe much genuine vitality into the play, which is designed by Paul Wills. Samuel Anderson gives “golden boy” Luke a good impression of inner calm, which soon shows telltale cracks in his armour, while Adam Deacon clearly enjoys being the “bad boy” sibling, snorting coke and grooving to his dance music. Both actors suggest the little kids that lurk inside many adult men, and Yasmine Akram — making her stage debut — gives Tara just the right measure of smug self-satisfaction. Yet despite the fun moments, and the guffaws, this story fails to enlighten.