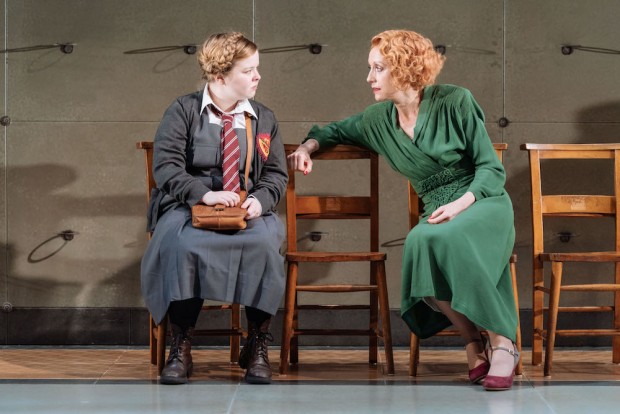 Miss Jean Brodie, the larger-than-life Edinburgh schoolteacher that strides in her sensible shoes through Muriel Spark’s 1961 novel, was memorably popularized by Maggie Smith in Ronald Neame’s Oscar-winning 1969 film version, but this flamboyant character has also been something of a magnet for other actors. These include Vanessa Redgrave, Geraldine McEwan, Anna Massey, Patricia Hodge, Fiona Shaw and Siobhan Redmond. Now it’s Lia Williams’s turn to be the charismatic purveyor of life knowledge at a stultifying school for girls, in the familiar story freshly adapted by Scottish playwright David Harrower.

It is 1930s Edinburgh, and the Marcia Blaine School — based on Spark’s memories of the James Gillespie High School — is run on rather strict, not to say Calvinistic, lines by Miss Mackay, who insists on rote learning and following the syllabus. But Brodie is the maverick teacher who scorns these old-fashioned ideas, preferring to teach through candid conversations, and by instilling a love of art and beauty in her young charges. She talks to the pupils about Giotto, in her Pre-Raphaelite view the greatest Italian artist, and about Hugh, the young man who was her love interest until he was killed in the First World War. But, however appealing her teaching style, the more we learn about her the more the shine of her personality is tarnished.

Gradually, we realize that not only is she pretentious and elitist, but also dogmatic and an admirer of Italian fascist leader Benito Mussolini. She is also manipulative and exclusive, forming a clique of the brightest pupils who get invited to her flat to partake of amaretti biscuits and small glasses of sherry. She also singles out the most physically attractive girls and tries to push them into the arms of Teddy Lloyd, the philandering art master, while herself fending off the advances of the rather shy music teacher, Gordon Lowther. In the end, her wrong-headed politics and her love of grand if empty gestures results in the death of one of her pupils in the Spanish Civil War.

Harrower’s adaptation forces Brodie to share the limelight with Sandy Stranger, a new arrival in 1933 and who, in the play’s opening scene, we see being interviewed by a nameless Journalist for a feature about her recently published bestselling book on psychology. By now it is 1947 so the action is seen in flashback as Sandy prepares to enter a Catholic convent, which involves taking a vow of silence. The Journalist is particularly intrigued by her dedication of her book, “For J”: is this Jean Brodie or one of her pupils, who number a Joyce and a Jenny among the Monicas and Marys? And is Sandy’s decision to become a nun the result of spiritual reflection, philosophical investigation or atonement for some cruel act?

The Prime of Miss Jean Brodie is a story of adult charisma, of how an inspiring teacher can turn your life around, but it is also a parable of teenage betrayal. Sandy arrives at the school at the same time as Joyce Emily, and the two new girls rapidly become friends, but when Sandy is invited into Brodie’s clique of special pupils, she just as rapidly drops her friend. Yet it is Joyce who grows into the most passionate voice of protest against Brodie’s vapid but dangerous politics (she thinks 1930s Germany is an ideal society and is an admirer of Spain’s General Franco), although Sandy, ever watchful, ever analytical, also comes to understand the truth behind Brodie’s mask of pleasure. Less fortunate are the other girls, especially Jenny, who Brodie grooms to be an actress and Teddy’s lover.

Polly Findlay’s fluent production avoids the fluting exaggerations of some previous versions and tells the story with a fine appreciation of its grounding in the needy emotions of all concerned. Not only do the teenage girls ache for tales of Italy and romance, but their teacher also needs love and attention. Her ambivalent attraction to Teddy, and the way she keeps Gordon at a distance while enjoying his bedroom eyes are clearly shown, as are the rivalries and uncertainties of the young girls. Although Harrower never really delivers the hardest verbal blows against Brodie, he does show her in middle age, sick and dying and tormented by suspecting but not knowing who betrayed her to the headmistress.

Williams plays the title role with just the right mix of attractive eccentricity and unpleasant willfulness. She has a throaty Morningside purr which makes her insults sound like caresses, and she gives Brodie an inner steel of certainty even when the teacher clearly doesn’t know what she is talking about. Dressed in red or green, with a wavy auburn hair-do, she conveys both the character’s charisma and her danger. Yet she also has a nasty side, punishing disloyalty and impatient with other people. It is a brilliantly nuanced portrait of an utterly selfish individual. Truly, this actress is in her prime.

A number of bells hang over designer Lizzie Clachan’s cold and bare set, which represents not only the puritanical school but also the cheerless convent and at one point a crematorium, and their tolling evokes institutional timetables as well as religion and mourning. Comfortable in both 1947 and the 1930s, Rona Morrison’s increasingly confident and intellectual Sandy is a good contrast to Nicola Coughlan’s more vulnerable, more needy Joyce. The rest of the cast — especially Sylvestra Le Touzel (Mackay), Angus Wright (Gordon) and Edward MacLiam (Teddy) — provide excellent support, and occasionally shine. Surely, this is the crème de la crème of Brodie adaptations.