Home » Reviews » The Plough and the Stars, National Theatre

The Plough and the Stars, National Theatre 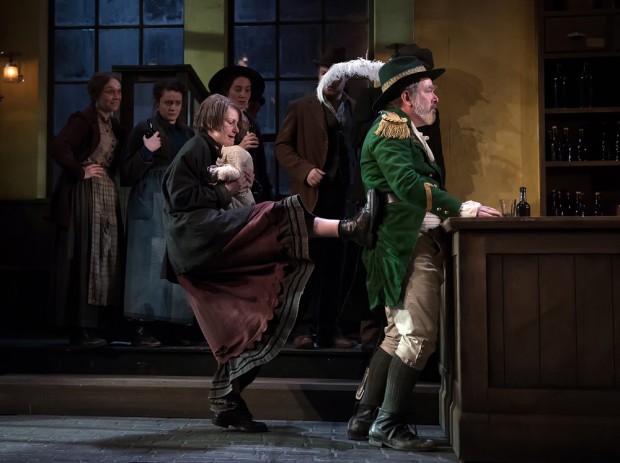 Anniversaries are lotteries. Sometimes they allow us to see the past with fresh eyes; at other times, they simply accentuate the growing distance between then and now. Because this year marks the centenary of the Easter Rising of 1916, the National has decided to revive Sean O’Casey’s The Plough and the Stars, whose last two acts are set during the ill-fated uprising against British colonial rule. Of course, since this decision was made, the UK has voted for Bexit, which once again raises the question of a hard border between the Republic of Ireland and Northern Ireland, and the whole subject of a united Ireland. How does O’Casey’s work speak to these current anxieties?

The play is set in a Dublin tenement. The story starts in November 1915, and focuses on a group of working-class people, including Jack Clitheroe, a bricklayer and member of Irish Citizen Army, and his wife Nora, who disapproves of his political activities. Then there’s the three blokes: Nora’s uncle, Peter, a labourer; Jack’s cousin, Young Covey, a communist; and Fluther, a carpenter and boastful trade unionist. Some light relief comes from their banter and from that of Mrs Grogan, a charwoman, and Bessie, a protestant fruit-seller. The atmosphere is at first jovial, then the darker clouds begin to gather.

In the second act, we move to a pub. Outside, there’s a political rally and snatches of passionate Republican speeches float into the room, through which pass memorable individuals such as Rosie the prostitute, who are either indifferent or hostile to the idealistic speechifying outside. As the drunken drinkers quarrel and tussle, three Republican volunteers enter the bar, carrying the Plough and the Stars flag and the Irish tricolour, a moment that caused outrage when the play was premiered in 1926 since it was felt disrespectful to have these patriotic symbols in close proximity to the inebriated and the immoral. By Act Three, when the Easter Rising is taking place, this tension between sacrificial nationalism and working-class practicality leads to tragedy.

What’s always so impressive about O’Casey’s writing is his distinctive mix of political intelligence and poetic sensibility. In the context of Brexit and Islamist outrages in Europe his sceptical take on the use of political violence is easy to applaud. His distrust of violent rhetoric, and hatred of the idea of extreme nationalism as a quasi-religious blood sacrifice, is compelling. Equally, his sympathy for working-class people — with all their individual failings and foibles — is clear. O’Casey’s empathy with working women, with the weak and the marginalised, lies behind every line. Nora’s passionate rant against the costs of violent revolt, delivered with rasping heat by Judith Roddy, is a dramatic highpoint. So while The Plough and the Stars is full of understanding of the idealistic urge to change society, it is also deeply critical of Republican myths as well as of British imperialism. There’s a message here for Corbynistas and Brexiteers alike. Likewise, O’Casey’s tacit approval of looting as a form of proletarian shopping seems very contemporary. And his articulation of the emotions of fear and cowardice is a heartfelt plea for humanity.

There’s a commemorative feel to this rather sombre and hyper-realistic production, directed by Jeremy Herrin (who stepped in when the original director, Howard Davies, fell ill), and the evening, with its beautifully designed set by Vicki Mortimer, is atmospheric rather than thrilling. Although the production has a meticulous quality that suggests research and authenticity, the detail is a bit stifling. I think that the cast feel more comfortable with the melody of the language, than with making it crystal clear. Some passages are barely audible. Still, there’s good work from Lloyd Hutchinson (Peter), Stephen Kennedy (Fluther), Tom Vaughan-Lawlor (Covey) and Fionn Walton (Jack), with similarly affecting contributions from Josie Walker (Mrs Gogan) and Justine Mitchell (Bessie). While it’s hard to forgive the melodrama of the play’s ending, this is still an outstanding account of the highs and lows of radical politics.

• The Plough and the Stars is at the National Theatre until 22 October.