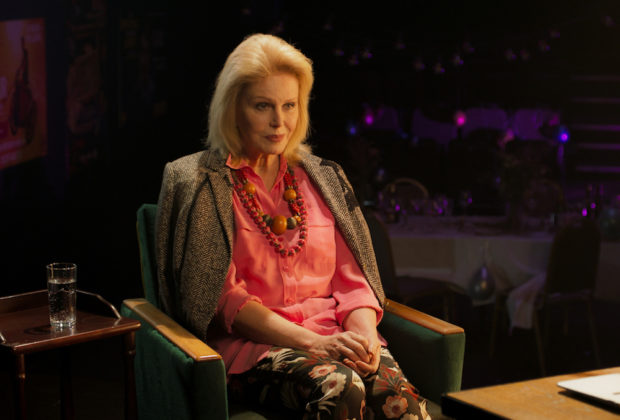 Let’s face it, most adaptations of classic novels are disappointingly pedestrian. They are so middle-of-the-road — fancy-dress characters speaking fancy-dress dialogue in fancy-dress plots. But there are memorable exceptions: Amy Heckerling’s film Clueless brings Jane Austen’s Emma squealing into our world, while Martin Crimp’s Misanthrope and Cyrano de Bergerac do the same for theatre’s Molière and Rostand. Now the team that delighted me with their version of Jonathan Coe’s What a Carve Up! last year is back and they have dusted off Oscar Wilde’s 1890 classic, with a little help from Joanna Lumley, Stephen Fry and Fionn Dunkirk Whitehead.

The familiar story is about how the posh boys Basil and Harry form a friendship with the beautiful young Dorian (Whitehead), who is then offered the fantasy gift of eternal youth. But when he falls in love with the actor and singer Sybil, they react negatively and are seemingly proved right when she messes up on stage, and then takes her own life. This tragedy reverberates around the lives of the three men, two of whom also end up dead. Director and writer Henry Filloux-Bennett sets this morality tale in the present, and Theatr Clwyd artistic director Tamara Harvey films it using every trick in the digital book. The result is a delicious extravaganza of Zoom, Skype, text, Instagram, TikTok, Snap Chat and YouTube. And more. Much more.

In this world of smartphones and laptops, Filloux-Bennett reverses the original novel’s conceit by having the older techno wizard Basil give Dorian not a portrait painting, but a digital filter that keeps him looking ever youthful online, while his actual body visibly decays with every amoral or selfish act. The theme of how ugly thoughts create ugly faces hooks up with a critical attitude to our society, which so often values appearances more than substance. The obsession with digital validation, with likes and followers, is also echoed by the extreme isolation felt by everyone, but perhaps especially the young, during this pandemic time. It’s a nice touch that Dorian is a second-year Eng Lit student.

The film’s running time of about 90 minutes means that the ending feels a little rushed, but the framing device — similar to that of What a Carve Up! — of a series of interviews with Lady Narborough (Lumley), a friend of Dorian’s mother, and the smart but heartless bohemian Harry (Alfred Enoch), silkily conducted by Stephen Fry, is both enjoyable and engrossing. Beginning with the — spoiler alert! — death of Dorian and disappearance of Basil, any newcomer can treat the fable as a mystery, although its most mysterious aspect is the wildness of desire. There’s a real sense of polysexual eroticism that pervades the piece. And an uncomfortable feeling of voyeurism: why are we so attracted to watching other people’s misery?

Several other themes flash up briefly, like glimpsed text messages or memes on Twitter: the dangerously addictive quality of social media, the power of internet influencers, the prevalence of conspiracy theories and fake news, and, intriguingly, the way that silence can be an active attempt at forgetting. The fact that more young people are keener on social media than on voting is part of the piece’s criticism of the digital age. Most resonant is the metaphor of the viral, both as in “going viral” and as in the pandemic virus. Amid the sexting and the selfies, the traditional trope of the Faustian pact, the selling of one’s soul for earthly pleasures, rubs thighs with insights into our capacity for illusion: must we for ever project our needs onto others?

Filloux-Bennett’s writing respects the essence of the relationships and psychological truths of Wilde’s original, and brings out the essential cruelty of Dorian’s treatment of Sybil, while at the same time throwing him into the world of catfishing, cruising and conspiracy weirdoes. The words blaze with a sense of the contemporary and there’s a nice contrast between the scornful Lady Narborough, the arch Harry and the initially more innocent Dorian. Sybil, who gets a lovely song (by Jared Zeus) to sing at Dorian’s 21st birthday party, is openhearted and vulnerable. The scene in which she messes up on stage is excruciatingly embarrassing. Her subsequent treatment by the men is revoltingly brutal.

A co-production between The Barn and four other theatres, supported by almost 20 partner venues, this is a brilliantly watchable film by Harvey and director of photography Benjamin Collins. Although regulations mean that the characters cannot interact in the same space (except in one scene caught on CCTV), this only intensifies the sense of their spiritual isolation and physical loneliness. Whitehead’s Dorian is perfectly poised and gender fluid, exploring Grindr, languorously flirting with Harry and Basil, and then falling madly in love with Sibyl. Touchingly played by Emma McDonald, she is the most attractive of the characters, posting brief Shakespearean soliloquies — especially those of the Prince of Denmark — on her Insta feed, but always carrying a vulnerability that attracts viciousness like wasps to honey.

While Lumley invests her ladyship with a quasi-regal contempt for ordinary people, she also shows her slight doubts when she denies the terrors of ageing, likewise insisting that only her best side appears on film. Equally obsessed with beauty, but of the young male variety, Alfred Enoch plays the scornful Harry with enormous panache, at times Wildean in his posing, at other moments seriously rattled by the emotional ups and downs of his relationship with Dorian. Although I feel that Russell Tovey is miscast as the older techie artist Basil, his appearances in the guise of an avatar are a real delight. But it is Whitehead, who descends into the underworld of self-hatred and physical decay, that most impresses, while the filming, with its flashbacks, onscreen texts and YouTube episodes, is a star player in its own right. Although clearly a film rather than a theatre piece, this really is a great adaptation.