Home » Reviews » What a Carve Up!, Barn Theatre

What a Carve Up!, Barn Theatre 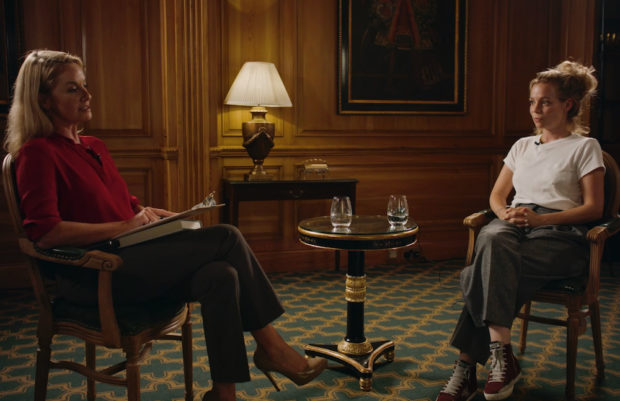 Classical murder mysteries end with a neat solution — and with the arrest of the perpetrator. Postmodern murder mysteries play games with the genre, turning it upside down and inside out. So don’t expect a satisfying ending. This film adaptation of What a Carve Up!, Jonathan Coe’s 1994 bestselling novel, is a postmodern crime story — and then some. And then some more. And yet more of more. To say that it’s complicated is probably an understatement (it really is!), but it also has more than a few pleasurable elements, notably the cast: although we only hear their voices, director Tamara Harvey has persuaded Derek Jacobi, Stephen Fry and Celia Imrie to participate in what must be the biggest streamed mash-up of the lockdown so far.

Okay, so some plot background: in January 1991, six members of the powerful Winshaw family are found murdered. The police are convinced that there is only one suspect, Michael Owen, a successful writer, who is investigating the corrupt family and writing a scandalous history of them. Whereas the original novel begins during the second world war, this adaptation by playwright Henry Filloux-Bennett begins in the present, with two new characters, Raymond Owen, Michael’s son, who believes that his father is innocent, and Josephine Winshaw-Eaves, the last surviving member of the family, who thinks exactly the opposite.

With chronology turned upside down, Harvey’s version — expertly filmed by Graeme Watt — offers a postmodern media collage of fragments that tell this convoluted story. So while Raymond decides to prove his father’s innocence by presenting the evidence of his own Google-fuelled and YouTube-retrieved researches, Josephine gives a television interview in which she tells us the alternative facts. This contrast is a great device that increases the conflict between the high-born, reactionary and populist Josephine — her pro-Trump T-shirt reads: “Pussies for Trump. Let’s grab four more years” — and the mixed race Raymond, who rather sweetly seeks out the truth.

Originally a 1980s state-of-the-nation story, in which the virtues of Thatcherism were attacked and exposed as vices, this What a Carve Up! is right up to date, because, after all, we still have a Tory government that cares more for its chumocracy and making private profits than for increasing the public good. So inevitably there are jokey mentions of Dominic Cummings, Ann Widdecombe and the pandemic, as well as welcome satires on the vicious selfishness of financiers, arms dealers, media tycoons, art bigshots, agribusiness shitheads and MPs. Mentions of the statue of a family slave trader from the past rub shoulders with nostalgic shots from the 1961 What a Carve Up film.

Harvey exploits the sheer diversity of today’s media, using parodic fragments from YouTube interviews, old newsreels, talking-head interviews, webcam shots, podcasts, old cassette recordings, crime drama reconstructions, true crime references, spoof adverts, old family photographs, scene of crime shots and other archival images. In all of these retakes, rewinds and cuts, the image of a ghastly family, whose Tory pieties barely conceal a stinking streak of sheer greed and corruption, comes into sharp focus. Yes, they are pro-Nazi and friends of despots. By end, you really start to think: if they hadn’t been murdered already, I’d have gladly done ’em in myself.

If this is hardly challenging to the liberal sensibility, it’s all rapid and colourful enough to make for easy viewing, with the film’s story having a compelling quality that soon hooks you. Most of the piece’s stars — Jacobi, Fry, Imrie, Rebecca Front, Griff Rhys Jones and Sharon D Clarke — do not appear on screen, but their voices give the story a cosy familiarity. Alfred Enoch lends Raymond a friendly charm, although he doesn’t quite convince as the furiously obsessive son he’s meant to be, but Fiona Button is super as the slimy and offensive Josephine, who we watch trying to manipulate her on-camera interview with Tamzin Outhwaite’s sharp and skeptical journalist.

A co-production between The Barn theatre, Cirencester, the Lawrence Batley theatre, Huddersfield, and the New Wolsey in Ipswich, the various sections of the show were recorded remotely by the cast members, but Harvey has put the whole thing together with enormous flair. Filloux-Bennett’s fractured storytelling is sophisticated, and the jokes about Hamlet or “thespian furloughs” are sure to raise a smile. There’s something very beguiling in this genre parody, with its intriguingly complex plot and ingeniously meta-theatrical (or should that be meta-televisual?) presentation. It really is great fun — a postmodern masterpiece.