The Memory of Water, Hampstead Theatre 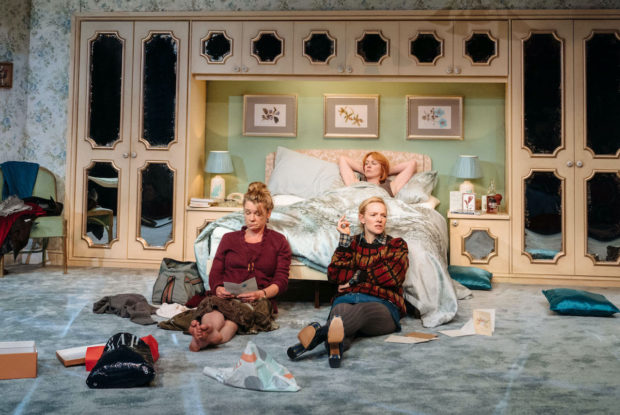 Memories are notoriously treacherous — this we know. I remember seeing Shelagh Stephenson’s contemporary classic at the Hampstead, when this venue was still an aging prefab, and enjoying Terry Johnson’s racy staging, which starred Jane Booker, Hadyn Gwynne and Matilda Ziegler as the trio of bickering sisters, and then being blown away by his West End version, in which comedy heavyweight Alison Steadman partnered Samantha Bond and Julia Sawalha (with Margot Leicester thrown in for good measure). The play went on to win an Olivier for Best Comedy in 2000, was made into a forgettable 2002 film called Before You Go, and now returns to the Hampstead Theatre at a time when its central theme is excruciatingly relevant.

Why’s that? Because it’s about death. Grown-up sisters Teresa, Mary and Catherine meet at their family’s clifftop bungalow on the north-east coast of England the day before the funeral of their mother, Vi. Like any such reunion, this one sees them immediately reverting to childhood attitudes and sibling rivalries. Teresa, the eldest, has been resentfully making all of the practical arrangements, while her long-suffering husband Frank is struggling in the winter cold to return from a business meeting in Düsseldorf (the couple have a health-supplement business). Middle child Mary is a calmly successful doctor completely focused on a young male patient who suffers from amnesia. She is also having a long-term affair with Mike, a celebrity television medic, who is already married with three kids. Catherine, the youngest, is angry, attention-seeking, but also agonizingly aware of her inability to form stable relationships.

As an exploration of family relationships at a moment of grief the situation staggers, often amusingly, along the uneasy line between tragedy and comedy. Bossy Teresa is the exasperated older sister who finds herself picking up the pieces while her younger siblings are far away from home, yet all three experience the deep, almost oceanic, pull of the past. Stephenson shows, in what was her stage debut, how each of the main characters attempts to ignore the reality of loss, whether through exaggerated evasion or deliberate distancing, and how each of them learns something about themselves, and their loved ones, by the end of the two-act play. She’s also very good at illustrating how grief can temporarily unhinge you. The highpoints of the action are when the sisters dress up in their mother’s clothes, when Teresa gets drunk and starts telling everyone the truth about their father, and their childhood secrets, and when Vi, who appears onstage as a fantasy in the mind of Mary, gives her version of the family story.

Although there’s a bit of repetition, and perhaps a few too many secrets tumbling out of old rusty tins, Stephenson’s account of memory is exactly right. Whenever family members remember the past, they are remaking it, elaborating on it and contesting each other’s memories. Vi’s dementia and the post-traumatic amnesia of Mary’s young patient add medical nuance to individual experiences of loss and anger: how would you like it if your experiences were appropriated by a sibling? And, when the sisters discuss how they unconsciously mimic their mother’s gestures you get a real feel for how your childhood, and perhaps your genes, can carry a bodily heritage. We are who we spent our childhood with. Above all, the idea of how water can hold a memory of a chemical even when not a single particle of it remains offers a tantalizing metaphor for the power of unforgetting — whether you feel like objecting to or embracing this homeopathic idea.

If these three sisters exemplify Philip Larkin’s lines about how “they fuck you up, your mum and dad, / They may not mean to but they do”, Stephenson throws in a lot of quirky good humour to illustrate the negative effects of emotionally repressed parenting. The central theme of death accentuates the memory of the deceased, in this case the siblings’ mother Vi, and provides another subject on which they can disagree. Tellingly, each of them even has a different version of how the family cat died. In the end, the only thing they agree on is how, in the absence of their distant father, Vi used to treat them to midnight feasts. On the subject of sibling rivalry, there’s a good joke about Woody Allen’s 1986 film, Hannah and Her Sisters, although today the very mention of his name seems to be breaking a taboo.

Alice Hamilton’s rather sombre production starts off by doing justice to Stephenson’s zippy one-liners — some of which are really great — but soon settles into a kind of stillness, which allows a lot of pain to come through, but also saps some of the energy of this comedy. In fact, she stresses, perhaps justly in a time of pandemic when every mention of illness, hospital and death feels ghastly, the tragic side of this tragi-comedy. On the downside, Act Two does seem to drag a bit, and not even this most sympathetic of productions can find the necessary compassion for this rather cruel and unattractive family. But, on the other hand, while the cast won’t dazzle you with firework performances, they will deliver a good story well told.

On Anna Reid’s set, whose pastel colours reflect the glowering sky of this wintery tale and whose mirror-heavy wardrobes distort the faces and bodies of the sisters, Lucy Black lends Teresa a good dollop of sternness, and is rather wonderful during the drunk scene, while Laura Rogers’s Mary travels from irritable sleepiness to an acceptance of her life’s lonely cold with great conviction. As Catherine, Carolina Main brings out her character’s embarrassing vulnerability as well as her fighting spirit. There is also good work from Adam James (currently in BBC One’s Vigil) and Kulvinder Ghir as Mike and Frank. I also admired Lizzy McInnerny’s Vi, whose anger at life’s injustice haunts the whole family scene. One of Hampstead’s Originals series, celebrating the venue’s 60-year history, The Memory of Water remains a relevant and poignant experience.