Home » Reviews » The Girl with Glitter in Her Eye, The Bunker Theatre

The Girl with Glitter in Her Eye, The Bunker Theatre 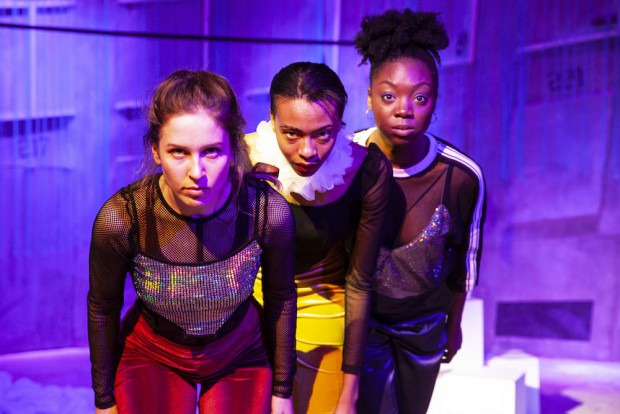 Storytelling, and the integrity needed when telling another person’s narrative are increasingly important issues today. While, in the past, writers and artists often appropriated other people’s experiences with barely an acknowledgement, now this is usually and rightly seen as pretty unacceptable behaviour. OPIA Collective’s evocatively titled debut show, The Girl with Glitter in Her Eye, presents a case study of appropriation in a multidisciplinary style which uses spoken word, dance moves, live performance of original music and a host of theatrical techniques. The last in the Bunker’s B-Sides Season, it is a slender but quite powerful piece whose heart is certainly in the right place.

The story is simple. Helen is a young black artist whose latest painting is a kaleidoscopic art work that is stunning beautiful, and inspired by a freak accident in which a woman accidentally scarred her eye when gazing at the refracted images of a kaleidoscope while opening it up. The physical scars create beautiful images. But the problem is that Sheila, the Art Director, who has commissioned Helen, thinks her work is “too nice”. And nice doesn’t sell. So she asks Helen to go away and paint something “shocking”, something that draws on her “background”. Although Sheila is a black Briton she seems blissfully unaware of the racist implications of her advice — if you’re black it must mean that you have had an abusive past. But Helen has no choice: she wants this commission so she goes away to think about images of shocking abuse.

The problem is that Helen hasn’t had a violence-filled life; she’s never been part of a gang, never been abused or poverty stricken. But Phil (short for Philomela), her Scottish best friend who runs a hip coffee shop, has had some distressing experiences. So when Helen talks to Phil about them she decides to use her friend’s experiences for her own art work. At the same time, Phil (who is white), decides to spice up her café’s menu by making plantain dishes. So while Helen appropriates Phil’s life experiences, Phil appropriates Helen’s cultural food heritage. It’s a neat, if unbalanced, equation that serves to illustrate how complex these issues can be. When Helen’s powerful new painting, which uses the traditional image of the swan to denote a female victim of abuse, becomes famous and valuable, Phil reacts with horror at this exploitation of her trauma.

Masha Kevinovna writes this story with great economy: the show, which she also directs, is barley 60 minutes long. Her decision to do a TS Eliot by overlaying a contemporary situation with a veneer of references to Ancient Greek tragedy — the play opens with a gathering of vengeful furies and its tragic ending is extremely poetic in its prose, while Philomela is the name of a Greek princess who was raped and transformed into a nightingale — tends to lessen its power. Not all of the dialogues are equally convincing, although some of symbolism does work (some of the passages evoke the myth of Leda and the swan). I also liked the way that Kevinovna talks about pain as a primary colour, and shows how art can intensify the communication of strong emotions.

OPIA Collective is a group of female/LGBTQIA+ artists who are dedicated to exploring socially and politically challenging topics in a multidisciplinary style. The strong points of this show begin with its committed actors: Anna Mackay (Phil), Naomi Gardener (Sheila) and Modupe Salu (Helen). Both Mackay and Salu convincingly connect to their characters’ anger, with the latter delivering a heartrending final speech, while Gardener is both a menacing spider-like Art Director, at the centre of the web of power in the art world, and a humorous figure of fun — we can easily laugh at her pretentious formulations. The ambiance of the show is greatly helped by the pleasurable rippling of Ben Ramsden’s music while Cara Evans’s design bathes the stage in pinks and blues and purples, reflected in the shards that hang from the ceiling. Maria Koripas’s movement is good at evoking awkward feelings and clumsy emotional tangles.

While the central relationship between Helen and Phil of course collapses under the strain of the artist’s desire for success at any cost, I do wish that Kevinovna had spent more time deepening and developing it. Although some moments in her depiction of female friendship are genuinely touching, the story is a bit too thin to be really satisfying. Still, the pleasures of the show — its acting, music and shadow images especially — do make up for some of the banality of the writing and the discretion involved in leaving the details of Phil’s experience of abuse rather vague is a welcome antidote to voyeurism. I really wish OPIA Collective all the very best, and hope that they continue to expand their multimedia approach.