The Corn Is Green, National Theatre 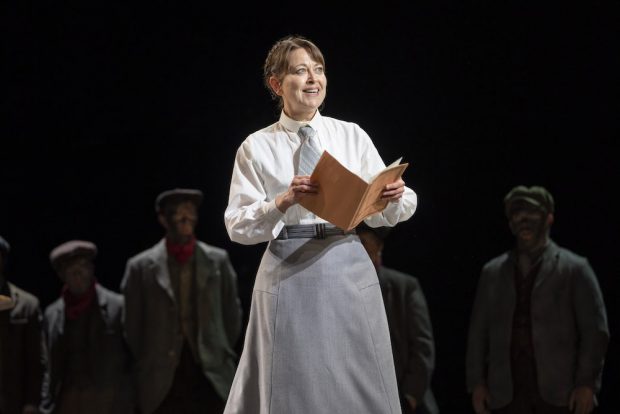 Let’s talk repertoire. Over the past decade the range of British plays, especially those from the 17th, 18th and 19th centuries, has shrunk in state-subsidized theatres. You can no longer easily see work by Shakespeare’s contemporaries, Restoration rakes or Georgian comics. George Bernard Shaw is in hiding. English 19th-century problem plays are invisible. The abandonment of older genres, of difficult plays, is just one symptom of subsidized theatre’s craven surrender to populism. Even 20th-century drama is under threat. So can the National Theatre buck this trend with this rediscovery of The Corn Is Green, and some help from its star, Nicola Walker?

Well yes, and no. The first London revival in 35 years, this semi-autobiographical drama by the Welsh actor and playwright Emlyn Williams was first produced in 1938. It is set in Glansarno, a coal-mining village in the remote countryside in Wales, where most of the workers are Welsh-speaking and illiterate. It is the late 19th century. So when English do-gooder and New Woman Miss Moffat (Walker) arrives to set up a school for local children she must first convince Miss Ronberry, a gentlewoman spinster, and Mr Jones, a gloomy Welsh chapel-goer, to help her, especially as the local Squire — who owns most of the land — isn’t too keen on educating the miners. If they can read, won’t they rebel?

As obstacles pile up, Moffat is discouraged, until she reads an essay by Morgan Evans, who is both a bad boy in class and a youngster with intellectual potential. As he responds to her teaching, he finds himself alienated from his fellow miners and increasingly antagonistic to Moffat’s controlling nature and her desire for him to go to university. Being headstrong and passionate, he reacts to this conflict by drinking and being attracted to Bessie, the teenage daughter of Mrs Watty, Moffat’s cockney housekeeper. The results of this brief romance threaten to upset all of Moffat’s plans for her prodigy.

Although the play is a heartfelt tribute to Miss Cooke, Williams’s own teacher, it is written with an uneasy mixture of jolly humour and deeply felt idealism. Clearly, the playwright is arguing that one inspiring teacher can make a difference to the fate of under-privileged youngsters, but at the same time his view of the society which he himself escaped from — rural Wales — is less than flattering. The most appealing aspect of Williams’s plotting is the fact that it is his story’s women — not only Moffat, but also Watty and Ronberry — that solve the problem called Bessie, while the men are either useless or easily manipulated.

The main drama of the piece is the relationship between Moffat and Morgan, which swings between conflict and cooperation as the young man finds his voice and develops his intellectual skills. Although the final plot twist is psychologically unlikely, Williams delivers a great dialogue between teacher and pupil which is full of passionate humanism. Director Dominic Cooke pays tribute to the semi-autobiographical nature of the play by adding a framing device which shows the adult Williams deciding, in the midst of the distractions of jazz age London, to write his play.

Despite some tedious banalities (do we really need to see Williams sit down to tap out his play on a typewriter?) this framing device adds a lot of humour to the opening scenes, as Cooke’s Williams speaks the stage directions, manoeuvres his characters around the stage and, in one coup de théâtre, changes the direction of the plot. Sound effects stand in for stage props; narrative for exposition. Underlining the theatricality of the play enables Cooke to contrast the bare stage of the playwright’s imagination at the start with the more naturalistic setting of later scenes as the tale develops. The framing device both adds to the original play, while also dare I say improving it, and at the same time draws attention to the shortcomings of Williams’s writing.

Cooke’s production, which is designed by ULTZ, is entertaining in its populist stress on feelgood comedy, and his cast are uniformly good. Walker, who usually specialises in various shades of agonized self-doubt, is smoother here, giving Moffat’s middle-class feminism a confident brio that generates immediate audience support. Whether incisive in her opinions, especially in her anger against the Squire, or tender in her regard for Morgan, her performance is always detailed and convincing. As the youngsters, Iwan Davies (Morgan) and Saffron Coomber (Bessie) come across as agreeably gutsy, while the adults — Richard Lynch (Jones), Alice Orr-Ewing (Ronberry), Jo McInnes (Watty) and Rufus Wright (Squire) — offer good support. Gareth David-Lloyd’s broodingly thoughtful Williams is a delightful addition.

A distinctive feature of the production is the small chorus of miners, whose songs are composed and arranged by Will Stuart, and lend a distinctly Welsh air to the show. At its centre is both an image of an inspirational teacher, a flawed but effective character, and a reminder of how class has always been central to British life and art. At the same time, the idea that learning Latin, Greek, Tudor history and Milton as a passport to a better life has a philanthropic Victorian feel. Yet these are images and themes that continue to have resonance in the present — the school you go to is still a good predictor of your career opportunities. But it’s a pity that this populist version makes more of a case for directorial rewriting than for the original play’s place in the repertory.

The Corn Is Green is at the National Theatre until 11 June.

Afterword
I recently met a couple of friends who have also seen this show. They were even more critical, pointing out that just like many stories about black people have a white saviour figure, this Welsh story has an English saviour in the central role, as well as at least three other English characters who are more fully drawn than their Welsh counterparts. To make matters even worse, the miners are all blacked up to appear as if they have just come up from underground: in reality, they would have a good wash before venturing out (working class pride), especially if they were singing. These exaggerated depictions of Welsh people by an English production are surely a scandal.