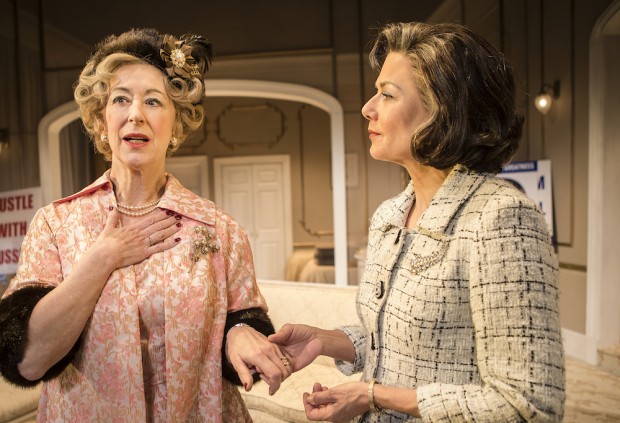 Is it possible to get too much of American politics? With Donald Trump’s daily tweets invading our digital space, a new Kevin-Spacey-free House of Cards on the, well, cards, and new films set in Watergate times, it might be that few will have any appetite for this revival of Gore Vidal’s 1960 play, which is set during a Democratic Party convention, and now makes its West End debut. But to dismiss it completely would be a pity because, for all the creaks of its plotting, this is quite a watchable account of political in-fighting. After all, any show that has Maureen Lipman and Martin Shaw in the cast can’t be all bad, can it?

Before I answer that, let’s recall the author. Vidal was a classic political insider — one of a small elite who mixed with the Kennedys and who boasted that he could trace his family back to the beginnings of the US republic. Born into a political clan, with a grandfather who was US senator for Oklahoma, he himself stood twice as a Democrat, once for the lower house and once for the upper. Although he failed both times, he spent decades using his knowledge and acerbic wit to criticize American politics, pouring bucketfuls of his patrician scorn on the “United States of Amnesia”, and writing novel after novel about political corruption and the ugliness of populism. Reading his barbs, you can see why he became known as the sharpest wit in the West.

Sadly, this reputation for razor-sharp comment is only sporadically visible in The Best Man, which is set in a Philadelphia hotel during a party convention which features two candidates in a ferocious struggle to become nominee for president. One is William Russell (Shaw), a confident and cultured operator, an Ivy League liberal who resembles JFK in his dealings with women, and the other is Joseph Cantwell (Jeff Fahey), a religion-spouting populist from a more humble background in the South, and a man who has apparently cleaned up the New York mafia. Both potential candidates seek endorsement from ex-president Hockstader (Jack Shepherd), who is old and sick. Lipman plays the chair of a committee who rallies the wives and women of the convention.

Vidal’s text spills over with resonant phrases — “Life is not a popularity contest”; “We’re all interchangeably inoffensive”; “Your conscience is my enemy” — which could easily apply today, and seem to show that nothing much has changed since 1960. In fact, the dirty tricks on display, the backstabbing and plotting, are all almost too familiar, and, for a political insider, a lot of what Gore says is pretty reductive, cynical and exaggerated. All the deals are nasty; all the characters flawed; all the politics soiled by expediency. His play is pretty much a eulogy for an imagined past when politicians were cleverer, more idealistic and tougher than today. Every man on stage is either a bastard or unsuitable for the job of being the most powerful man in the world.

The tactics used by all of the protagonists are the meat and potatoes, or should that be whisky and pretzels, of modern American politics: candidates must believe in God; they must be faithful to their wives; they must be straight and not gay; they must steer clear of saying anything about evolution. Or being too clever. Or having too good an education. They must say crowd-pleasing things. They must play to the gallery. They must be populist to be popular. And so on. Although Vidal’s men are reasonably well characterised, it has to be admitted that the female roles are all rather underwritten. Yes, this is a boys’ play and its plot is powered by Cantwell’s having some dirt that he can dish and thus destroy his rival, the patrician Russell. May the best man win? I doubt it.

In the end, the thing that really rankles is how unprovocative the piece is. I expected something closer to the bone from this arch gadfly, a man who later became a regular television studio controversialist. So I was disappointed to find that there’s a regrettable veneer of liberal virtue-signaling old-school style. Behind the action on stage you can picture Vidal in his well-appointed study, quietly ridiculing the follies of his contemporaries. Clearly, he hated the growing populism of American poplitics, the rabble rousing, and the hypocrisy, and so will most of the audience. His picture of a gay smear is suitably ugly. But there is little here to disturb a West End public.

Although the play is well structured, and will appeal to politics buffs, Simon Evans’s production, designed by Michael Taylor, is rather underpowered. Neither Shaw as the honest Russell nor Fahey as the crafty Cantwell are very convincing as American politicians, lacking in both charisma and seriousness, and Shepherd is visibly uneasy as Hockstader. Lipman’s role is pitifully small and the other women — Glynis Barber as Mrs Russell and Honeysuckle Weeks as Mrs Cantwell — barely get a look in. Although the play’s message — that being defeated can be a victory of sorts — is appealingly paradoxical, it is unlikely to make your heart race very fast.