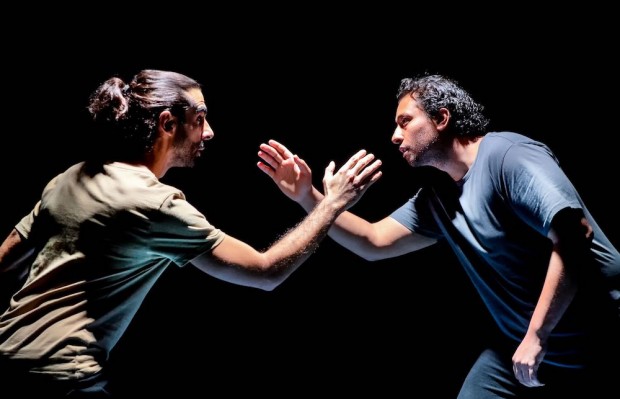 Family dramas are a staple of British new writing, but as well as talking about our nearest and dearest, can they also say something about the wider society? The Arrival, by director turned playwright Bijan Sheibani, who won an Olivier award for Bola Agbaje’s Gone Too Far! in 2008, has ambitions to be a study of masculinity in crisis. After all, Agbaje’s play was about brothers, and both of Sheibani’s recent directing hits — The Brothers Size and Barber Shop Chronicles — were pungent with testosterone. His new one opens at the Bush Theatre, which is enjoying a great run of plays in new artistic director Lynette Linton’s first year, and as a drama it’s slender, but superbly staged.

The plot begins, like the title suggests, with an unexpected arrival. Tom, a 35-year-old computer businessman who was adopted at birth, spontaneously seeks out his biological brother, 30-year-old Samad. When they meet they like each other, but it is a weird situation. Both men are happy to get to know their new extended families, but there are also tensions. For a start, the brothers have been brought up in two very different class and religious situations, and who knows if they will all get on? For Samad, things definitely shift: once he was the older brother of his sister; now he is Tom’s younger brother. This requires psychological readjustment.

So, riffing on the play’s title, Tom is not only an arrival — he is also a rival. Although he too has to adjust to the reality of his new family, he especially has the face the fact that they might not embrace him completely. After all, his is an unforseen appearance. He has some features in common with his new-found brother, but the two men are also different. Actually, the drama is not so much about ideas of nature versus nurture, as about feelings of masculinity. How do two men — linked by shared genes but separated by different life experiences — manage to connect? To communicate. When they do physical stuff, like jogging or cycling, they are fine; but how do they talk about unmanly emotions? The answer, rather unsurprisingly, is not very well.

As their two families rub up against each other, Tom and Samad become increasingly defensive, vulnerable and needy. Especially Tom, whose view of his personal identity is increasingly challenged. Can he ever get over the sense that he was abandoned by his biological parents, and will they make up for this now? When the brothers struggle to express disappointment or loss they can’t quite articulate their emotions. Frustration leads to anger, and anger to violence. Things come to a head when Samad meets a new woman and suddenly decides to get married. During an excruciating wedding scene the two brothers confront each other. As Dion Warwick’s version of Burt Bacharach’s “Walk On By” plays in the background, one of the men gives a markedly ironic smile. But neither man wins.

If the central theme of the play, the crisis of masculinity, is well-travelled territory, to the point of being a touch clichéd, the same can’t be said about Sheibani’s writing. His scenes are short and sharp; his dialogues subtle and allusive; his storytelling fast and clear. There are some memorably quirky moments, as when Samad says that he went off one of his girlfriends because of her smell; there are passages of gaping inarticulacy when nevertheless something important is communicated. It is a great director’s form of playwriting: a brilliant blueprint ready to be brought into life by a pair of excellent actors. And it certainly is. Sheibani directs his own show and the result is a theatrically thrilling evening which perfectly balances humour and sadness.

On a bare circular stage, designed by Samal Blak, Scott Karim (Tom) and Irfan Shamji (Samad) tell the play’s story over 70 fast-paced minutes, constantly surprising you with the mood swings and exceptional vigour and commitment of their performances. With the aid of movement director Aline David, this two-hander brings the space to life, with the scene changes being little playlets in themselves. There’s a breathlessly dynamic running scene, a dance sequence and a cycling episode, all emphasizing Tom’s physical fitness and Samad’s lack of condition. There are costume changes, and introspective passages. What comes across most strongly is the vigorous life of the acting — the energy just pulses off the empty stage.

Both Karim and Shamji are not only convincingly in character, but they present a meaningful arc of development across this rather slender drama. In other words, they lift a slight story and make it much deeper than it might be. Using simple mime, they turn an empty stage, with just a couple of chairs and bikes for props, into a dozen locations. They powerfully convey masculine competitive tendencies and the way youngsters view older family members with a mixture of wry insight and grudging sympathy. Under the spotlights this kind of poor theatre relies entirely on the actors, and Karim and Shamji deliver superlative performances. As the moments of tenderness follow incidents of aggression, a terrifically complex picture emerges of how boys will simply always be boys. Great stuff excellently performed.