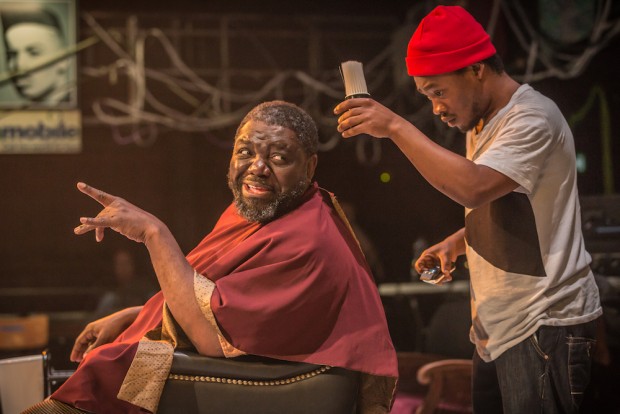 Black theatre used to be one of most creative aspects of contemporary British drama. But recently a lot of the impetus behind plays by black playwrights seems to have dried up. The great names of the past couple of decades are either silent, or, which is worse, merely repeating themselves. There’s little sense of excitement, or adventure. The age of austerity appears to have driven many black theatre-makers into their silos. Huddled for safety. But there are some exceptions.

One such is performance poet Inua Ellams. The strapline for Barber Shop Chronicles, his joyful new show, is: “One day; six cities; a thousand stories.” Allowing for hyperbole, this is just about right. The piece is set in a handful of cities that stretch across one part of the globe, from London to Lagos, Accra, Kampala, Harare and Johannesburg. Each of the 14 scenes in this co-production between the National Theatre, West Yorkshire Playhouse and Fuel, is set in a barber shop, with most of them in London, while the others are loosely connected to the main centre. But the main theme is not geography, but fatherhood and masculinity.

The evening begins with a foot-stomping pre-show entertainment, which lasts for more than 20 minutes and sees the cast take members of the audience onto the stage to give them a quick session in the chair or a fast spin on the dance floor, with thumping world music and great moves. Then the actual play begins. After a quick prelude in Lagos, the main focus is the Three Kings barber shop in London. Samuel, a young man, shares the chairs with the older Nigerian Emmanuel and thirtysomething Caribbean Winston. A family secret involving Samuel’s father lies in a corner like an unexploded hand grenade, waiting to explode.

The barber shop is one of those places, like the old-fashioned English pub or the working men’s club of yesteryear, where men gather, and where men talk. In Ellams’s vision, it is both a confessional and a therapy room, a place to boast and brag, and a location where men fight and maybe even heal. In each of the six locations his African men watch the same soccer match, Chelsea versus Barcelona in the championship cup, with varying loyalties and comments. So the barber shop is a locker room as well as a church.

With its larger-than-life characters, its humorous jokes and its stories, this a thematically coherent evening that it is as much about language as it is about relationships. The role of pidgin, of the different varieties of African English, is debated and discussed, and the play’s energetic linguistic flavours make an argument for diversity all by themselves. Other subjects that engage the characters are the disciplining of children, the place of women in their lives and the business of religion, as well as of politics. Allowing for moments of pain, all this is all done with a crease of a smile in almost every exchange.

The main emotional punch of the show comes from the awkward relationship between fathers and sons. This takes a large number of forms, with some passages of agony: from the bewilderment of a father with what to do with his new-born baby to the way that so many of the men have been bought up by single women, after their fathers have gone missing. This fact of absent dads — which also suggests a political point about the lack of paternal governance — causes a lot of emotional pain, and this feeling is latent in almost every scene of this panorama. It runs deep.

What lifts this rather slender 105-minute play into a thrilling night in the theatre is Bijan Sheibani’s vigorous production, designed by Rae Smith, with its ensemble cast who commit completely to their characters and kick a bucketful of life into the stories they tell. Fisayo Akinade (Samuel), Cyril Nri (Emmanuel) and Anthony Welsh (Winston) in particular are impressive, and so are Hammed Animashaun, Abdul Salis, Patrice Naiambana and David Webber, all of whom play multiple roles. Running through this evening is a very strong celebratory feeling, in which black cultures of masculine friendship come across brilliantly in all their variety and their sense of fun: while theatre too often sees black people as a social problem, this show exalts in the best aspects of their identity.
If you want to be at an event that sends pulses of electricity through your veins, and delights you with its joy of life, then this will be one for you.