A Taste of Honey, National Theatre 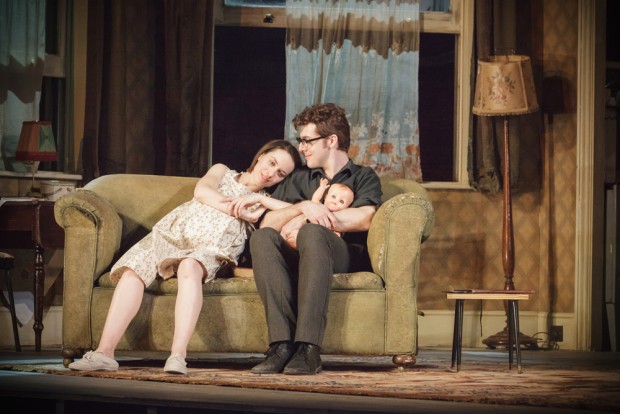 Another week, another postwar classic. Hot on the heels of last week’s revival of Oh What a Lovely War comes another legendary play from the Joan Littlewood museum of great one-offs. This time it’s a restaging of Shelagh Delaney’s 1958 play about poor parenting and teen pregnancy in Salford. Although this play is lauded in most history books as a great radical breakthrough, it has attracted fewer revivals in recent years than plays such as Samuel Beckett’s Waiting for Godot or John Osborne’s Look Back in Anger. Is there a good reason for this comparative neglect?

The original play was penned by Delaney when, as a 19-year-old Salford teenager, she saw a production of Terence Rattigan’s Variation on a Theme on tour in Manchester. She was so incensed about its mealy-mouthed portrayal of homosexuality that she determined to write a realistic account of sex, and of real life. Hence the story of Jo, the young daughter of the single mother Helen, and of her pregnancy following a brief encounter with a black sailor, followed by her co-habitation with Geof, a young gay art student.

Of course, in the hands of Littlewood, the piece’s original director, this slice of life became embellished with several theatrical devices, such as direct address to the audience and the presence on stage of a live jazz band. How does its current director, Bijan Sheibani, tackle the challenge of re-imaging the play for an audience of today? At first, the signs are not good. The initial image is Hildegard Bechtler’s huge set, which slowly lumbers into view, a sunless Coronation Street monstrosity, all sooty tenements and scrubbed doorsteps. Then this revolves and a shabby flat appears in all its hyper-realistic glory — you can almost see the mould growing in the corners and smell the grease from the blocked kitchen sink. Such high-definition grimness feels much too rich for the play, and Delaney’s young voice struggles to be heard amid the peroxide hair-dos, glittering high-heels and assorted 1950s glam. This is not naturalism so much as cartoon caricature; not stripped back poverty, but hugely expensive stage and costume effects. Yes, we’re in a theatre museum. Except that this time there’s no onstage jazz band and precious little direct address to the audience.

Battling gamely against the massy impressiveness of the design is the cast, led by the wonderful Lesley Sharp as Helen and the magnetic Kate O’Flynn as Jo. If the first round goes to the set, gradually these two women make their mark. Sharp grows from being a battered fortysomething with a dripping nose into a woman suddenly rejuvenated by the prospect of another marriage, while O’Flynn starts off as a vulnerable child and develops into a confident young woman. Good support comes from Dean Lennox Kelly as Peter, Helen’s smarmy new beau, and Harry Hepple as the earnest and sensitive Geof.

But the most tender moments are those when Jo has a tryst with Jimmie, played by Eric Kofi Abrefa, the black sailor who gets her pregnant and then ships out. Suddenly you forget about the overpowering set, and instead you thrill to the sympathetic vibes between the actors. The same is true in much of the second half in the gentle domestic banter between Jo and Geof, soon to be rudely interrupted by the domineering Helen. But such episodes of emotional truth are often compromised by Sheibani’s love of comedy, with distractingly funny dancing during the scene changes, and a tendency to prefer grotesque caricature to real-life honesty. Sadly, in this production the pathos is never deep enough to balance the jokiness — and the lasting impression of a lurid cartoon of northern working-class life is extremely hard to shake off. What this play needs is more simplicity, less art.