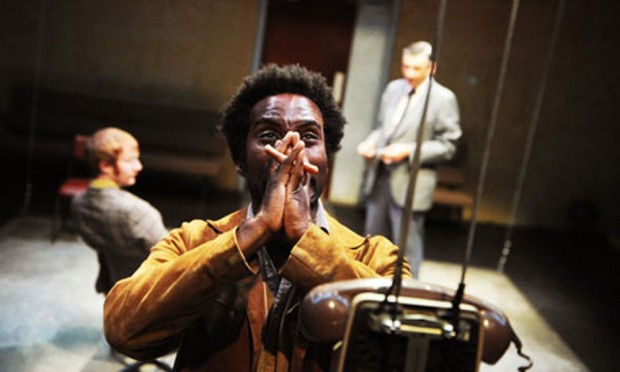 What’s it like to be a black man in the ­clutches of the police? In his 1979 play, Sus, Barrie Keeffe shows what happens when a couple of flatfoots pick up a suspect on the eve of Margaret Thatcher’s first general ­election victory. But although this drama originated as a protest against both the notorious “sus” (vagrancy) laws, as well as serving as a warning of the implications of Tory law and order policies in the 1980s, the passing of time has done little to diminish the relevance of the piece.

Under the “sus” laws, which were passed to control vagrants in the 1820s, the police were allowed to pick up suspects on the mere suspicion that they might be guilty of some crime, any crime. Surprise, surprise, these crude rules were usually used to harass black kids, often to demonstrate to youth of a Caribbean heritage that, on the streets, the cops were kings. The stupidity and injustice of this policy were aptly demonstrated when, in 1981, the Met’s Operation Swamp — aimed at stopping and searching West Indian youth indiscriminately in south London — resulted in the Brixton riots, the biggest explosion of black resistance to racism on the streets of Britain. In the same year, the “sus” laws were repealed. Urban riots continued throughout Thatcher’s decade-long reign.

In Keeffe’s play, Delroy is an unemployed black man who is lifted and finds himself at the local nick. His police tormentors, the older Karn and the younger Wilby, at first imply that he has been arrested on “sus” and then tell him the truth: his wife has been found dead and he is the prime suspect. Suddenly, it looks as if he is being fitted up for murder. Or is he guilty? He seems upset, but is he just acting?

Keeffe accurately captures the breezy ­confidence, the vulgar triumphalism and the smart-alec sarcasm of the two cops, and contrasts this sharply with Delroy’s wide-boy playfulness, a self-confidence that turns into shock, agony and terror as he is told about what has happened to his wife (the details are distressing). As the interrogation proceeds, Karn keeps popping out to get updates on Thatcher’s progress at the polls. As the Tories romp home, the cops see this as a mandate to attack ethnic minorities.

On Chloe Lamford’s bare boxing-ring set, with only three chairs and one phone, Gbolahan Obisesan’s powerful production soon sets the pulses racing. With superb timing, this battle of wills brings out the best from all three actors: Clint Dyer’s Delroy gives a titanic account of a suffering man, Simon Armstrong’s Karn oozes brutal charm and Laurence Spellman’s Wilby is quiet but vicious. The brutality of the cops, from verbal provocations to physical abuse, is utterly convincing, and Delroy’s final act of resistance, when he spits straight into Karn’s face, drew an instant gasp from the audience on the night I saw the show.

But as well as being a social issue play, this is also a psychological thriller. Although we instinctively feel that Delroy — who is no angel — is innocent, we don’t know whether he will be able to prove it. And if he didn’t kill his wife, then who did? Although you might feel that Keeffe flatters the audience a bit by ­portraying Delroy as a victim, this play is much too savage and disturbing to be accused of merely stroking our liberal prejudices. And it suddenly feels timely again. Although the police now use anti-terror laws for stop and search, and the new Government is a coalition rather than the product of a Tory landslide, the relevance of this revival is in no doubt. In 1979, Sus was prophetic; today, it feels like a statement of brute fact.