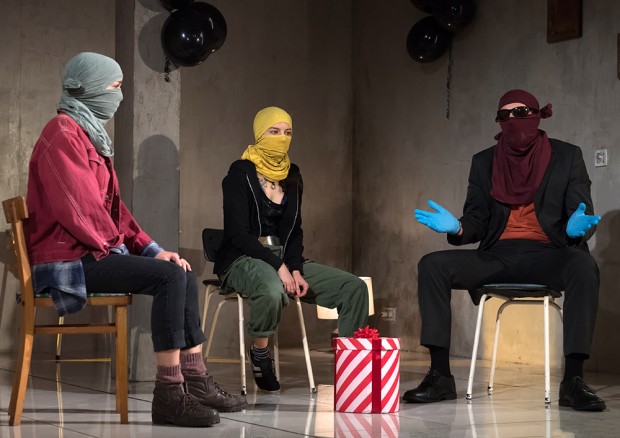 In the 1960s, we had the theatre of commitment; today we have an attitude of non-committal. Once, political playwrights could be guaranteed to tell you what to think, to describe what was wrong with society — and what to do about it. Now, as Chilean playwright Guillermo Calderón’s new play, B — which was developed by the Royal Court’s international programme — makes clear, the keynote is ambiguity and an ironic detachment. It sets the tone for this venue’s autumn season, in which “emerging writers from across the world make radical new work for Britain”.

B starts innocently enough with Marcela, a young woman, being comforted by Carmen, her older neighbour. Apparently, her boyfriend has been blown up by a terrorist bomb. And what a terrible time for this to happen: just as she is preparing for a birthday party. It soon emerges, however, that neither of these stories is true: Marcela and her flatmate, Alejandra, are just trying to get rid of Carmen because they are expecting an important clandestine visitor. The women have formed a secret political cell and they have asked a more experienced activist, José Miguel, to bring them a bomb. When he arrives, with the explosive disguised as a birthday present, the three of them discuss what exactly they hope to achieve with this dangerous weapon.

In a wonderfully surreal touch, Alejandra, Marcela and José Miguel all wear scarves to hide their identities. As indicated by the play’s title, the word “bomb” is taboo, a B-word not to be spoken. Instead, they must use the synonyms “cow” and “cheese”, which gives their discussions of the bombing plan a bizarrely humorous atmosphere. Given that these anarchistic terrorists quickly appear to be bundles of nerves, and seem totally incompetent, this 80-minute play is more Monty Python than Angry Brigade. But amid the jokes about “easily embarrassed terrorists”, and a funny episode of toilet humour, a wider vista gradually opens up.

At several points, playwright, screen-writer and director Calderón includes long speeches which act like vertiginous escalators of ideas, in which a kind of high-powered series of word associations paint vivid sketches of the social and political background. In one, Alejandra talks about how all of her friends are in prison, and imagines her trial on terror charges and her incarceration in a high-security prison. To British audiences this is a reminder of the Troubles as well as of recent Islamist convictions. Over everything, like a pall of black smoke, hang the memories of the bloody Chilean military coup of 9/11 1973. In another speech, Marcela vows revenge for her friend Martin, who was killed while planting a home-made device in a shopping centre.

But the broadest panorama is offered by José Miguel who, a bit like Mick Jagger in “Sympathy for the Devil”, imagines participating in every armed struggle since the Russian Revolution: “They taught me how to shoot in Libya,” he says. “I learnt to starve in Belfast. I ate octopus in the Basque Country.” During this, he seems to grow in his role as parent to a whole new generation of activists, a guiding hand from a radical past. But the surreal touches, “They killed my left kidney”, are a reminder that here Calderón is writing in the great British imaginative tradition of Caryl Churchill rather than merely as a state-of-the-nation playwright.

B is an odd hybrid. At its centre it has a long discussion about the ethics of planting bombs, and about the distinction between deliberately trying to maim and injure people and just making a loud explosion, the difference if you like between the Islamist fanatics of today and the Angry Brigade in the early 1970s. But, despite realistic accounts of squatters and a surveillance society, of activists and anti-capitalist protestors, of secret police infiltrators and state-sponsored violence, the magic realist touches of the play tend to push it into a more ironic territory, with the playwright remaining detached, taking no side.

In the context of the groundswell of support from young people for Jeremy Corbyn, it is hard to understand whether this play is a visionary warning of the dangers of clandestine direct action, or a rather trivial entertainment about bombs and bombers in a country far, far from our own. When I saw the show, the Labour shadow chancellor John McDonnell was in the audience, a reminder that radical politics in South America have a continued influence on the left in this country.

Perhaps the sharpest point of a play that is prickly with satirical jabs in all directions is the contrast between an older generation of serious, ideologically committed activists and a younger generation of confused and suicidal rebels. The mindset of urban activists is illustrated; the confusions of radicalism demonstrated. Effective as this is, it also flounders in a general atmosphere of non-committal. And although B is well translated by William Gregory, it gets a rather unengaging and static production from Sam Pritchard on Chloe Lamford’s uninspiring set. Danusia Samal (Alejandra), Aimée-Ffion Edwards (Marcela) and Paul Kaye (José Miguel) play the main protagonists, and enjoy solid support from Sarah Niles as Carmen. But not everyone will love the postmodern equivocation at the heart of this whole enterprise.