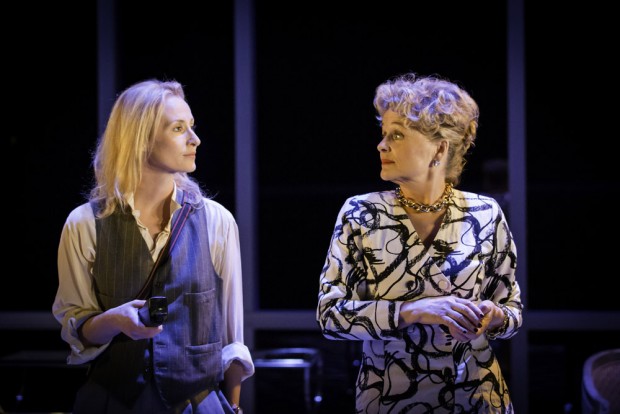 On contemporary stages, absence is a constant presence. This is very odd if you consider how corporeal and concrete theatre is. Unlike film, which is just light shining on a screen, or books, which are just letters on the page, theatre is live performance that is irreducibly there in the same space as you are, breathing the same air. Yet many playwrights — led of course by Samuel Beckett, Caryl Churchill and Martin Crimp — have explored the notion of absence on stage.

In this revival of BAFTA award-winning writer Abi Morgan’s lightly feminist play, which was first seen at the Traverse in Edinburgh in 2000, the central male figure is, for a change, absent from the stage. Instead, we watch what happens to the women who surround him. We find ourselves, oddly enough, in an unnamed state (perhaps a former Eastern European or Soviet country), where four women wait for the arrival of the ruling dictator. As snow falls and phones ring, gradually it emerges that a revolution is gathering pace beyond the palace walls.

This could be the Romania of the Ceaușescus, the Philippines of the Marcoses or the Argentina of the Peróns. It doesn’t really matter; it’s not politics that interest Morgan, but four women on the verge of a disaster. They are Micheleine, the absent dictator’s wife (Sinéad Cusack), her oldest friend Genevieve (Michelle Fairley), plus Kathryn (Genevieve O’Reilly), a Western photographer who is meant to take his portrait, and her interpreter Gilma (Zawe Ashton). While they wait in the lavish surroundings of the presidential palace, their dialogues begin to repeat, like a stuck recording. As a crimson Venetian glass smashes, the scene is re-run, and then re-run again. And again and again. And again. And yet again. This repetition with variation enables Morgan to explore the inner lives of her characters, as they reveal what they are actually thinking. The contrast with what they say is both humorous and quietly satisfying.

Pretty soon the personal and political tensions between the four women emerge. Micheleine is suitably regal in her designer-label clothes and quiet confidence of power, while her closest friend Genevieve is a complete contrast: simply dressed and extremely modest in her demeanour. She is like a poor cousin. But all is not well in their friendship. Likewise, ethnic tensions arise with the arrival of interpreter Gilma, who comes from the north of the country. So while the civil war comes nearer and nearer, the antagonism between her and the other two women grows stronger. You just know that things will come to a bloody end.

As the Western visitor, the photo-journalist Kathryn provides an outside eye. Her attitude is critical, wry and feisty, but she also has a cool detachment from the rest of the characters, symbolised by her inability to speak their language. Yet her job means that she knows more than any of the others about the actual horrors that are about to engulf the country. And her account of the ethics of photo-journalism is a nice touch.

Although the dictatorial president is absent for the duration of the play, his presence hovers over the lives of Micheleine and Genevieve, inhabiting their memories and their experiences. The photographer politely claims to be fascinated by him, while the interpreter sees the whole ruling family as a rich grotto to be plundered. The story’s fractured form not only captures the tensions between the characters, but also suggests that the cracks in the edifice of society will soon bring this state crashing into dust.

Morgan scans this palatial scene, designed by Peter McKintosh with a huge gaudy chandelier surrounded by a circle of icy smashed glass, with a highly observant and unflinching look. Her women focus on the brands of handbag and shoe, the colour of nail varnish and the flavour of vodka. Their inner thoughts are bitchy, perceptive and revealing. There’s a strong sense that their waiting is a metaphor for powerlessness. Even the wife of the dictator has no real power as the rebels gather force.

Although there is a chilly quality to Morgan’s writing, Robert Hastie’s excellent production has great clarity and drive, and his actors do him proud: Cusack’s regal and patronising Micheleine contrasts with Fairley’s timid and gauche Genevieve, while Ashton’s spirited interpreter and O’Reilly’s coolly English photographer are similarly well drawn. All of them make a real journey during the course of this 90-minute drama. The music of these four women talking, the blend of contralto and soprano — and the humour of their inner thoughts — combine to create a vivid and complex picture of the lives of people who are essentially bystanders to history’s great upheavals.