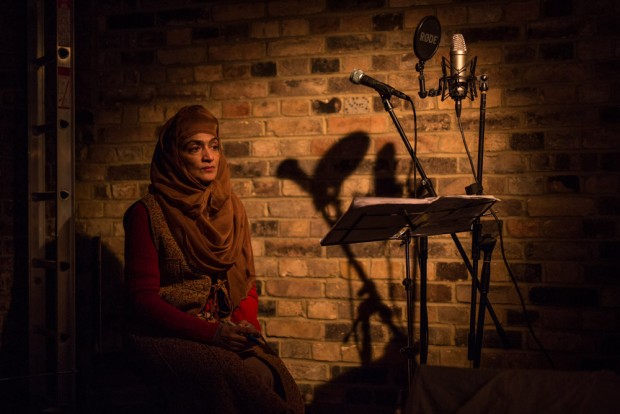 Kay Adshead’s new trilogy about the Arab Spring has a beguiling premise: to tell the human stories behind the headlines. We all remember the news footage of the Arab Spring in 2011, from Tunisia to Egypt, with their huge crowds and mass protests. Contrary to the West’s clichéd view of passive Arab women, many of the protestors who took to the streets were female. They may have been veiled, but that didn’t prevent them from being radical activists.

In these three shorts, Adshead celebrates these women using a variety of different texts, many of which are refreshingly unnaturalistic. The first playlet, written with Lebanese-Syrian storyteller Alia Alzougbi, has a great rubric: “in these turbulent times so-called artists have crawled out from under their stones.” Alzougbi, playing a character called Alia, uses charming little puppets to perform a couple of neat anecdotes critical of the regime. The small size of the puppets contrast neatly with the large issues she talks about. She is arrested, thrown in prison and beaten. Despite her injuries, she continues to use a single finger to perform her puppetry.

Play Two, called The Women’s Spring, opens out into a panorama of historical incidents, telling stories from Egypt, Tunisia, Libya, Syria and a remote borderland. This epic vision of demonstrations and radical creativity uses a mixture of techniques — testimonies of witnesses, choral recitation, celebrity satire, refugee stories and tales of female vengeance against tyrants — to give a strong and heady picture of women making history. We watch women complaining to a court of redress in Egypt, a female candidate standing in the Tunisian elections, a group of women betraying the whereabouts of the hunted fugitive Gaddafi.

The third playlet, beautifully written in an open text which shines with poetic images, is called The Singing Stones, and tells the story of a singing woman who confronts soldiers at gun point. Despite being arrested and beaten, her spirit is not quelled. When the news is too depressing, Adshead argues, a radical action needs a boost from fantasy to make the point that change is possible.

But while it is easy to agree with Adshead’s point of view, and good to see her emphasis on women’s experience, there is something deeply dismaying about the constant horror of torture and sacrifice. Despite the moments of humour — usually as black as the deepest dungeon — this is an emotionally taxing and psychologically painful evening. If Adshead is really saying that the Arab Spring is the greatest missed opportunity of the new century then she certainly makes her point. I left the theatre with a mind full of images of smashed teeth, broken bones and ghastly defilings.

Adshead directs her own work in a production by Mama Quilla which has the rough and ready feel of poor theatre. Sadly, much of the film projection is lost on the bare brick walls, and I would have admired the hard-working nine-strong multicultural cast more if Adshead hadn’t explicitly explained that this gives the play a more universal feel. Despite the life-sized puppet and some great moments of political criticism, a lot of the stage images are messy and weak. At its worst, especially in the unnecessary scene set in Camberwell (where middle-class British women debate whether to put on a play about women in the Arab Spring), the writing is literal-minded and earthbound.

Yet, at its best, and despite my misgivings, the playwriting is sometimes suddenly able to soar free of the gruesome realities of political defeat and to scatter a bouquet of sharply wrought images across the hot studio space which is home to the show. At moments like this, when Adshead’s imagination takes flight, you feel — like one of the characters says — “sick of all the small daily hates” and part of something bigger, freer.