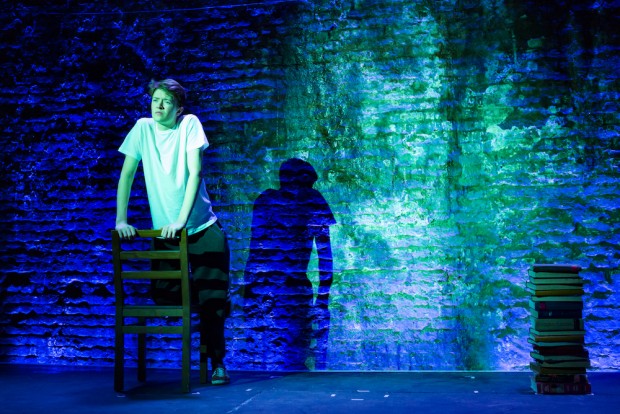 The Dark Web has an intriguing sound about it. Like something out of JRR Tolkein or JK Rowling, it suggests a netherland peopled by strange creatures, and maybe even dangerous monsters. As indeed it is. Television writer Alex Oates’s 60-minute monologue — which premiered at the Edinburgh Fringe and made history in 2014 as the first show to be crowdfunded by, among others, the cryptocurrency Bitcoin — has an richly evocative title and now, after an outing at the Vaults in January, makes an appearance in the West End. The fruit of Oates’s interviews with online drug dealers, it explores the opportunities and threats of selling, and of course buying, drugs on the dark web.

Silk Road (How To Buy Drugs Online) rapidly tells the story of teenager Bruce Blakemore, a Geordie loner who lives with his 84-year-old Nan, and has few interests. He doesn’t have any mates; he doesn’t want to go to college; he’s not interested in books. Then, one day, he hooks up with a nameless local lass, a former class mate, who introduces him to the Tyneside party scene. Very soon the boy’s into drugs, into music, into sex and even into dancing. Yes, the drugs have transformed his life. But when she leaves to go to Portsmouth uni, he’s on his own again. Time to get a grip. More by chance than intent, he lands a job as a DJ in local mobster Shaggy’s club. And then he discovers the dark web.

The play’s title is the name of a drugs market on the Dark Web, accessible only to encrypted browsers that law enforcement finds hard to bust, and evokes the history of the global drugs trade. The original and historical Silk Road crossed Asia, and brought Eastern luxuries to Europe; the digital Silk Road brings coke from South America into European nostrils. When Bruce begins to deal on the internet, he soon discovers the ragged camaraderie of illegals who buy and sell drugs, using Bitcoin and other transactions. And his delight in the fact that these people use standard Royal Mail to deliver the goods is palpable.

But although this is a story about illegal substances, it is also a coming-of-age tale that is beautifully and economically crafted by Oates. Like every coming-of-age drama it shows how an innocent, awkward teen blossoms through their experiences, although, sad to say, Bruce seems to have learnt very little by the end of this rather slight evening. But, true to the genre, he briefly experiences the pleasures of getting high and dancing with a gang of other teens, gets his heart broken, and falls out with local gangsters. In the end, as the forces of brutality and incarceration close in on him, he performs a… But, no, that would be telling.

As in every coming-of-age play, Bruce’s emotional life is more important than the high jinks of drug-dealing on the internet. Oates brings out his deep love for his Nan, suggesting the void left by the absence of his parents, as well as the teen angst of his relationship with his posh girlfriend. His portrait of Nan, a gossipy, self-aggrandising old woman who claims to have seen it all, is brilliantly vivid. Her main claim to fame is that she once presented flowers to Princess Anne, although her testimony about this might well be unreliable. But she is no fool. When he comes home after his first sexual experience, she immediately perceives what has happened, and dubs him “Casanova”.

As Bruce builds up his narcotics empire on the Dark Web version of eBay, there’s a sense of exhilaration in the writing that carries all before it. Oates uses bright linguistic turns — “like a cosmic sucker punch to the upper chest region” — to describe his protagonist’s feelings, while lobbing in some excellent one-liners. He revels in the imagery of pirates and, towards the end, uses the formula “The thing about my Nan…” to incantatory effect. Bruce’s use of his laptop and then of his Nan’s knitted tea cosies to expand his contraband marketplace is both enjoyably funny and almost educational. In his frequent asides to the audience the teen explains not only the mechanics of online dealing, but also the arcane mysteries of how to hollow out a book.

Newcastle-born Josh Barrow’s performance as Bruce is smart and attractive; he comes across as full of boyish charm, likeable, energetic — and he gradually widens his emotional range as the narrative unfolds. Smoothly directed by Dominic Shaw, he also plays all the other parts, from his stooping Nan to eye-bulging villains, and from Geordie lasses shouting “hiya!” to his cool girlfriend and her middle-class mates, with perfect dexterity. Rachel Sampley’s lighting and Gareth Taylor’s movement work best in the club and party scenes, helping to lift the show as the drugs begin to take effect. Although this is a rather slender piece, it is well put together and fun, fun, fun.