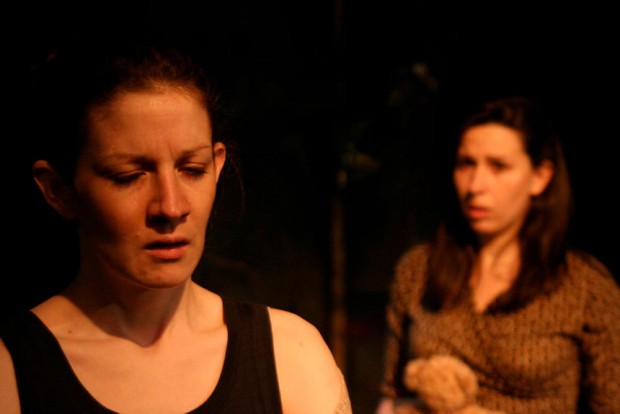 The war on terror has cast very long shadows over contemporary theatre, and provoked a variety of responses. In this double bill of six short pieces, the psychological consequences of terrorism are explored with a sense of almost unremitting bleakness. But this show is also something else: an example of the trouble with shadows — they cast precious little light.

In the first half, three episodes from Mark Ravenhill’s epic 2008 16-play cycle, Shoot/Get Treasure/Repeat, are revived. Its successive scenes — Crime and Punishment, Paradise Lost, and Fear and Misery — show extreme torture, ghastly bullying and suburban married angst on a jagged set which evokes the exaggerated agonies of the text.

In the second half, the remorseless theme is reprised in Phillip Whiteman’s trilogy, Eschara, which looks at the scars left by the 7/7 London Underground bombings. The three pieces — Pandemonium, Bedlam and Renaissance — are, once again, relentless and uncompromisingly bleak. But the writing is derivative and often unconvincing, and there are few laughs and even less poetry.

As directed by Dan Ayling, the evening is frequently loud and passionate, rather than detached and ironic, and sometimes the writing gets a bit lost in the jittery performances by a hardworking if overactive cast. Actors Daphne Kouma, Graeme John, Lindesay Mace and Phillip Whiteman are much better in the quiet passages than in the unfocused and noisy moments.

Although some elements of the production, chiefly designer Rhiannon Newman Brown’s sets and Sally Ferguson’s blazing lighting, are impressively vivid, the general impression is of an overwrought and rather unsubtle evening. At the end, the darkness of global politics receives few illuminating glimmers.