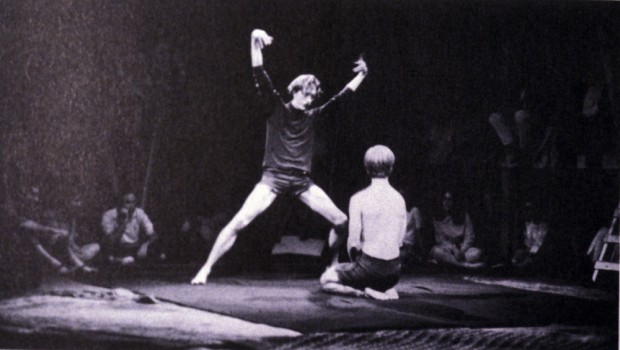 I’m just back from a couple of days in Bucharest, as a guest of the Romanian National Theatre Festival. Boy, was Pirate Dog pleased to see me back: those licks, that tongue! Anyway, in Romania I had the good luck to overlap with theatre legend Richard Schechner, a New York performance studies prof and editor of TDR: The Drama Review. He’s great in action, a real guru, all incisive simplicity and warm humanity. The presentation I saw was all about his 1968 classic, Dionysus in 69, a piece of “environmental theatre” which was based on Euripides’s The Bacchae and which played in his Performance Group’s SoHo garage. As ever, I was less interested in the deconstruction of the Greek text than in the relationship between performers and audience. Schechner projected some photos of the actors, who didn’t take curtain calls (there was no curtain in this found space and the action took place all around the audience); they just left the theatre at the end of a show. (He also made the point that actors bowing is a nostalgic gesture which nods to a past when all theatre people were in awe of the aristocracy.) There was one shot of the actors leaving the show dressed in ordinary clothes and covered in stage blood. Passers-by look at them with frank amazement. Somehow the Vietnam war protest politics, which was a small part of the show when it was taking place inside the garage space, becomes magnified when the actors walk into the street. Look, I know that this is a well-known show, and I don’t claim to be rediscovering it, but it is interesting to revisit theatre history. Who knows, if more theatre-makers did that, maybe we’d have some more politically powerful plays, or some better theatre. Anyway, the good news is that Rude Mechanicals in the US are reviving Dionysus in 69: it will be interesting to see how contemporary audiences react.