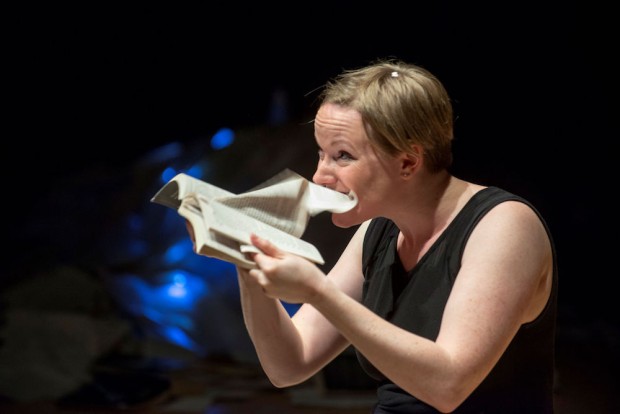 Amid a huge pile of torn and crumpled pages, Hannah Silva is tearing up a copy of E L James’s Fifty Shades of Grey, a sex novel about a sado-masochistic relationship whose impoverished writing style has been no impediment to its worldwide success. On a screen behind her a list of synonyms appears: “tractable, compliant, pliable, amenable, passive”, while the sound of breathing gets louder. Full of breath. But what are these words synonyms of? Okay, I get it. Submission. Silva looks intensely, defiantly at the audience. There’s a twinkle in her eye. We get it. And she knows we get it.

Submission. Yes, of course, Fifty Shades of Grey is a book about female submission. Or is it? In a programme note, Silva points out that “the young female protagonist isn’t actually submissive”, that’s just lazy thinking. But the novel is about power. Inescapably. A man’s power. Men’s power. Male power. Yes, that sounds right. But immediately Silva complicates this simple insight by mashing up the James book with the 1980s punk poet Kathy Acker’s In Memoriam to Identity, a far superior book which explores not only power, but perversity as well. And then some.

And Silva gives us both perversity and disorientation. Quotations about submissive sex and about violence appear on the wall. Childbirth is compared to torture. While these words flash up, Silva speaks the same sentences, but with subtle changes, sudden shocks, or schlocks. (Definition: cheap or inferior goods or material; trash.) In this mash up, a postmodern cocktail party, the literary rubs shoulders with the trashy. Then she does some signing. We’re okay because we can read the words on the screen. “How much pain is the child willing to experience?” How much pain can a mother endure? How much control can I exert over a pear? Yes, a pear!

Sometimes surreal, sometimes shocking, sometimes insightful, the 60-minute Schlock! is a strange piece of writing, which cleverly mixes apparent randomness with extreme control. As Silva explores Acker’s life, and especially her death from cancer in 1997, the unexpected collisions of the words generate odd explosions of sense: an alphabet of hurt morphs into an image of the child as a speaking orgasm, or a refugee. Or a cancer. Or just a body thing. And what is that new smell? Could it be eucalyptus?

Silva remains a calm presence on stage while all around her ideas are popping up and bursting in our faces. I like the violence of some of her juxtapositions, especially when I think she is comparing motherhood, childhood and terminal illness. But then, hot on the heals of surreality, comes reason. I have to ask: how exactly is a child like cancer? And I can’t think of a good reply. Maybe I’m not meant to. But if Schlock! is a bit too poetic for my taste, not earthed enough in the everyday real, I dare say that the wry allusiveness of this solo performance, produced by Penned in the Margins, is great tribute to Acker, as well as a subtle criticism of James.