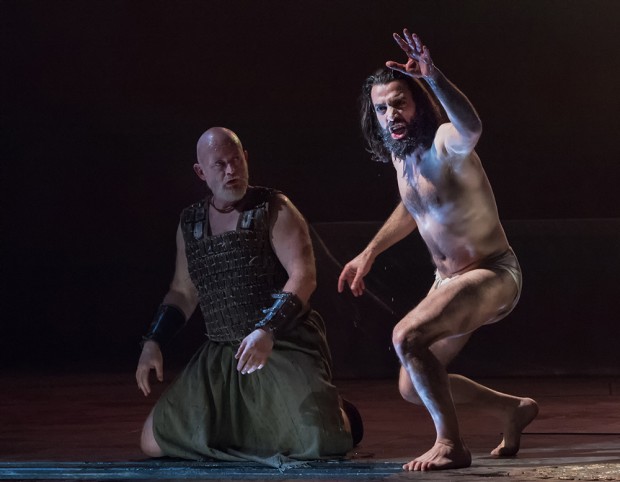 Is God female? It says a lot about Yaël Farber’s pompous and overblown new version of this biblical tale at the National Theatre that, near the end of an almighty 110-minute extravaganza, all reason seemed to have vacated my brain, and its empty halls, battered by a frenzy of elevated music, heaven-sent lighting and wildly gesturing actors, were suddenly open to the oddest ideas. You could call it the Salomé effect: initially seductive, but actually empty. I staggered out of the theatre, dizzy from witnessing this portentous and defiantly ridiculous bulldozer of a show. Yes, it certainly is an experience.

And yet. And yet it all began quite promisingly. After all, Farber (whose hits include Mies Julie and Les Blancs) is a terrific and original director, and her take on the Salomé story was bound to be intriguing. According to the programme, she has examined the sources of the Bible and of the Roman historians and concluded that Oscar Wilde’s version of the myth was more his invention than a strictly accurate account. She has also realised that, in the some of the sources, the dancer is nameless. From a feminist perspective, the conclusion is clear: the biblical Salomé is a male fantasy, so why not contest it with a female counter myth?

In this spirit, her young woman is not only Herod’s niece, but also Salomé “so called”, and her lost voice is the one that Farber wishes to restore. So she begins her version with the figure of the Nameless ancient woman (aka Salomé in old age) who is visited by Pilate, the Roman Prefect, a similarly old man who wants to know what exactly happened when Iokanaan, the holy John the Baptist, was decapitated all those years ago. For this act, ordered by young Salomé, has triggered not only a zealot revolt, but caused the Crucifixion and the beginning of Christianity — not a bad score for an apparently nameless dancer.

Farber supplies an alternative reading of the story, which unkind spirits might liken to the kind of thing promoted by The Da Vinci Code, but which has its own beauty and coherence. If anything, I thought that Farber could have gone further and absolved the dancer not only of the need to shed seven pieces of clothing, but also of the role of ordering the death of the Baptist. But never mind. In the spirit of contemporary feminism, the female body here is a metaphor for all colonised lands, modern as well as ancient. This makes the scenes between Herod, an abuser, a rapist, and the young woman undoubtedly powerful and replete with meaning.

The main problem with the play, for me, is the writing. Farber’s text is an odd mixture of myth speak (“I am Chaos, Grace of Fire”) and contemporary references (stuff about taxes, profit and colonialism). It’s verbose, declamatory and manages at the same time to be both over-explicit and muddled. Sometimes, as when Herod talks about the charms he expects to find between his niece’s legs, it is hard to resist a guffaw at the ridiculousness of it all. When he says, “Your saliva is the secret source of my life” embarrassed cringing seems like an inadequate reaction.

Still, there is a lot to enjoy in Farber’s directing and Susan Hilferty’s design. The main plus is the atmosphere of the piece. The evening begins with clouds of incense, gossamer fabrics wafting in the air, and continues with ritual gestures, the pouring of sand, wailing singers, and the deep growl of Adam Cork’s music, lit up by distant chimes. The spell — which includes a pictorial Last Supper — is woven, only to be broken by the banality of some of the words. Although parts of the text work as a kind of biblical incantation, bathos always lurks behind some palace pillar. There is simply too much imagery, too many metaphors and too much poetic uplift. And it’s all so humourless. To distract us, figures move in slow motion around the giant Olivier stage, the constant movement propelling the narrative (and there is a lot of background detail to absorb) forward.

Oh well, at least the acting is watchable. Isabella Nefar and Olwen Fouéré powerfully embody the young and the old Salomé, while Paul Chahidi lends Herod a truly salacious demeanor and Lloyd Hutchinson’s Pilate looms dictatorially over the action. As Iokanaan, the Syrian-French Ramzi Choukair speaks his lines — including some that come from Jesus — in a Middle-Eastern tongue, which requires a translation projected onto the back wall of the theatre, at the best of times a bit of a distraction. Still, his millenarian fantasies come across strongly. But the earth-shaking ending of the play seems to me to use a celestial battering ram, complete with angelic choirs, when maybe a quieter approach would have been more emotionally sincere, and more moving.