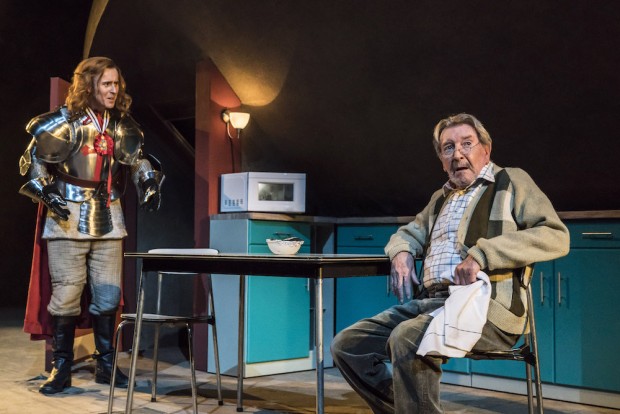 In Bertolt Brecht’s Life of Galileo (1943), there’s a typically didactic exchange: Andrea, the great man’s pupil, says: “Unhappy is the land that breeds no hero.” To which Galileo replies: “No, Andrea: unhappy is the land that needs a hero.” This quotation could almost be the motto of Rory Mullarkey’s hugely ambitious, but equally hugely wrong-headed state-of-the-nation epic. Of course, it’s great that Rufus Norris, artistic director of this venue, is encouraging youngish playwrights to use the massive Olivier stage for historical plays that explore our national identity in the Brexit era, but that doesn’t mean that the work has been free of problems.

So far, the results have not been good. After DC Moore’s flawed Common comes Mullarkey’s similarly flawed Saint George and the Dragon. Taking the myth of George, the legendary dragon slayer and rescuer of damsels in distress, the playwright wraps the folk tale in the flag of our nation’s story. So the patron saint of this island (well, the English bit anyway) is shown visiting us over three acts, saving first the feudal serfs, then saving the industrial proles and finally attempting to save (if only) our contemporary “ordinary people”.

In Act One, after a well-written and amusing Chaucerian prologue about noble “knyghts”, George arrives like an episode from Monty Python and the Holy Grail: he is a coward; his experience of dragon slaying is minimal, and the villagers are rightly skeptical of his ability to save Elsa, the maiden who is about to be sacrificed to Dragon, a shape-shifting feudal overlord who, it is hinted, might be just as interested in abusing her as in burning her at the stake. This act at least feels fresh and the storytelling has a neat twist. It invokes the history of medieval England, with its Magna Carta, Peasants’ Revolt and Civil War — the message is that we are a freeborn people.

When George returns, in Act Two, he finds that dark satanic mills have replaced the green and pleasant land of the previous scenes. Yes, it’s Victorian England, full of factories, trains and armies. Cities of dreadful night; the air choked with smoke. Children work in textile mills, suffering terrible injuries, and the population is exploited by factory owners. The Dragon is now 19th-century capitalism, and the ghosts of Charles Dickens’s Hard Times and Frederick Engels’s The Condition of the Working Class in England gaze down over a scene that reminded me of the Opening Ceremony of 2012 London Olympics. Rae Smith’s set, with its burgeoning townscape, miniature houses, cramped factories and smoking chimneys is the background to George’s defeat of the villain, although this time the symbolism is shakier and the politics all wrong. In an era of collective action, who needs heroes?

If anyone ever doubts that you can throw away a good idea in the third act, then I invite you to see this show. The last section of a very long evening is set in today’s England, all glass skyscrapers and wheelie bins, and immediately the clichés storm the stage. “Ordinary people” are shown getting drunk and watching the footie on the telly in a pub, out on a drink-fuelled hen night, and, always a bad sign, pushing supermarket trollies. Almost unbearably unimaginative, this whole act is poor in every sense: storytelling, ideas, imagination, metaphor, dialogue, social perception and political ideas. It feels like a counsel of despair.

The play is billed as a “folk tale for an uneasy nation”, but it mainly tells us what we already know: that history is the story of class struggles, and that freedom is only worth anything if it has been fought for. The ruling class never gives you any gifts. Mullarkey also charts the decline of our idea of the mythical hero: once a person to be venerated, he is now an object of irrelevance. But is this right: what about sporting heroes, or pop culture heroes, or celebrity heroes? Even if we no longer need heroes, surely we could do with some good political leadership. But how can we get them? And how do we rebuilt the nation? This allegory doesn’t say.

According to the play text, Mullarkey began the project as “a riff on Evgenii Schwartz’s 1943—4 play Drakon (The Dragon)”, which shows a knight freeing peasants from the Tsarist yoke, only to return to find a new tyranny: Stalinism. This satire sounds much more effective than Saint George and the Dragon, with its unclear third section and disappointingly evasive political stance. Unusually for me, I wish he’d just written an adaptation of the original.

Lyndsey Turner’s production has some enjoyable moments, mostly featuring Elsa’s father Charles, Henry, the Dragon’s sidekick, and a comic Boy, and three performances stand out: John Heffernan’s fabulously bewigged George has a beguilingly sympathetic aspect, especially in the first act; Julian Bleach’s wonderfully campy Dragon, who mutates into a much more sinister being; and Amaka Okafor’s feisty Elsa, who grows increasingly single-minded and capable as the evening progresses. There is also good support from Gawn Grainger (Charles) and Richard Goulding (Henry). But good acting can only get you so far: by the end I was so irritated by this tiresome play that I even longed for its hero to return and put us all out of our misery.